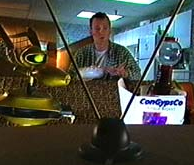 Here it is: the final season of Mystery Science Theater 3000. We get a pretty mixed set of episodes along with a few surprises.
First off a new set of opening credits that works the Castle Forrester into the premise. The first episode “Soultaker” gave us appearances by Joel Hodgson and Frank Conniff reprising their roles as Joel Robinson and TV’s Frank. This was also the season with a whole host of movies based in the South (Soultaker, Blood Waters of Dr. Z, Boggy Creek II, and Squirm). We get the return of Joe Don Baker in “Final Justice” and some wild experimentation with “Hamlet.
But it also marks the end of the show with the final episode “Diabolik”. The announcement of this must have occurred around the halfway point of the season because you can almost feel the energy drop from the series. Episodes that should be four stars are registering only two or three, and the last episode is lackluster.
But there are still a few classics to be found. Here are my favorites from this season:
Show 1001 – Soultaker
A great episode for long time fans of the show. Joel and Frank show up for the host segments and make them really fun. The riffing is pretty good especially with the infamous scene where Natalie takes a shower. Crow get something in his eye and wanders around the ship missing all the good parts. This is classic low budget 80’s filmmaking and it perfect riffing fodder.
Show 1002 – The Girl in Gold Boots
The first show to really break the sci-fi channel restrictions on types of episodes and boy is it a winner. Teens in peril, 60’s music and some of best characters ever featured in a MST3K episode. The riffing is top notch and hits all the right notes. The songs and dancing fuel the comedy both in and out of the theater, with Mike’s take on critter’s song being hilarious.
Show 1003 – Merlin’s Shop of Mystical Wonders
Bar none one of my favorite episodes of the show ever. The movie is an ungodly mess of failed TV pilots, failed movie and failed everything else. The early 80’s style of the second half of the movie is perfect for riffing, and gets the biggest laughs out of me. But almost all the Merlin sequences are funny too. Hell I just love the whole thing and the host segments just take off from the strange feature. For me this is the stand out of the season.
Show 1009 – Hamlet
How can you riff on Shakespeare? Quite easily if the production is as badly executed as this one is. Horrible dubbing, dismal sets and pacing that would make a slug look fast – this is the Bard done horribly horribly wrong. Mike and the bots are up to the task throwing witty and vulgar jokes together. They don’t move quite as fast as I would have liked, but the whole thing works for me, a lover of Shakespeare and the play. I recommend checking this one out especially if you know the play well enough to enjoy the mocking.
Show 1012 – Squirm
This 70’s worm-fest is actually not a half bad movie. But Mike and bots have plenty to work with. Everyone and everything is so southern that you can’t help but mock them. Add the nerdy hero Mick to the equation and you’ve got a riff-fest waiting to happen. It also includes the final short film of the series. If you haven’t seen “A Case of Spring Fever” and you don’t know who Coily the Spring Sprite is… well you need to check this one out.
The following is a list of all the episodes in Season 10 and my ratings out of 5:
Note: At this time I have not been able to watch show 1007 – Track of the Moon Beast. I saw it back on its first airing and remember it being funny but I want to give it a proper watch before I review it.
Posted by Roman J. Martel at 7:57 PM