Mystery Science Theater – A love for the laugh 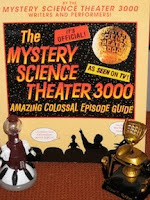 I’ve enjoyed Mystery Science Theater 3000 (MST3K) since I first saw the episode called “Hercules Against the Moonmen”. I literally fell off my seat laughing so hard. From that day forward I was hooked, and have been enjoying the show ever since.

The were a fixture of the 1990’s, their last show appeared in 1999. So in a way there is a lot of nostalgia associated with their show. I can’t watch “Pod People” without thinking about working at the video store and having it on. Some people my age have romantic memories of “Titanic”. I have romantic memories around the movie “Hobgoblins” (and if you’ve seen that movie you can imagine the strangeness of that).

I’ve remained a fan, and pick up each new DVD release and enjoy the Digital Archive Projects work to bring episodes to fans – especially ones that may never see the light of day because of rights issues.

I’m going to do some reviews of the episodes on this site. They will fall into an unusual format, where I review the movie itself and then the MST3K episode. I’ll also be following along with Satellite News in the order they cover the episodes. They are currently in season 9, so that’s where I’ll start. But I’ll also review the DVD released episodes as well.

Hope you enjoy the reviews and if you’ve never seen the show, I recommend checking them out on the internet, there is lots of amusing stuff out there.

I’ve written a couple blogs about MST3K on my storytelling site. Check them out here:
Simply the Worst
The Case Against MST3K
The Case For MST3K
Posted by Roman J. Martel at 2:49 PM