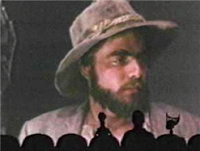 This has got to be my favorite season of the show that featured Joel as the host. The variety of movies is good, spanning everything from a television edit of the film Marooned to some of the most infamous films ever tackled by the series: Monster A-Go-Go and Manos the Hands of Fate. While those hideous creations loom large over the other films we also get a taste of Ed Wood with Bride of the Monster and the first of the Russian epics The Day the Earth Froze. So much good stuff here and Joel is at his best.

But there are a few duds here too. Space Travelers is a real snore. I was never able to get into Killer Shrews and Attack of the Giant Leeches. The Indestructible Man puts me to sleep. Monster A-Go-Go is so horrible it sucks the fun out of the riffing.

This season is also the first where I encountered the show. The episode was Hercules Against the Moonmen and it will always be a classic for me. I saw it at my girlfriend’s (now wife) house and fell off my seat laughing – literally. This episode fills me with nostalgia and I love watching it, not only because it’s really damn funny, but it takes me right back to some happy days.

The selection here is good, and just because I get bored to tears with Monster A-Go-Go doesn’t mean you will.
Posted by Roman J. Martel at 9:24 AM