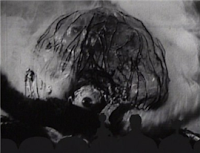 Here’s where it officially started. Sure there was a season of sorts before this, but for many fans 1989 marks the first year of Mystery Science Theater 3000. It debuted on the “The Comedy Channel” which would soon rename itself “Comedy Central”. Here is where we first met Joel Robinson (Joel Hodgeson) the poor schmo trapped on the Satalite of Love and forced to watch bad movies with his robot pals, Tom Servo (Josh Weinstein) and Crow T. Robot (Trace Bealeau).

Meanwhile buried in the earth in Deep 13 the two mad scientists Dr. Clayton Forrester (Bealeau again) and his assistant Dr. Earnhardt (Weistein again) conduct experiments on Joel by forcing him to watch the movies and tabulating the results.

The show is still working out some kinks here and there. The crew hadn’t quite figured out the pacing yet, and there can be some stretches without much joking or commenting (also called riffing) going on. The show has a different feel, almost like the crew is really watching the movie and expecting the audience to do the same. I think this leads to the long stretches without riffing. With the focus being the film and the comedy in the supporting role.

The host segments look pretty primitive at times, but there is a charm to these early episodes. You’ll notice pretty quickly that the last few episodes are a definite improvement over the ones in the first half of the season, but we get plenty of the brilliance we know and love popping up time and again here.

The following is a list of all the episodes in Season One:
Posted by Roman J. Martel at 9:15 PM