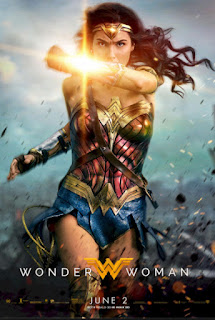 It was inevitable that I would watch Wonder Woman. It has Amazons in it. How am I supposed to resist that? Well you also have the fact that the character has always been around since I was a kid. I used to watch Challenge of the Super Friends a lot. But I got the feeling from the trailer that this movie would be a lot less silly and lot less 70s.

On the hidden isle of Themyscira Amazons from ancient Greece are still alive and doing well, thank you very much. Their queen Hippolyta (Connie Nielsen) tries to convince her spitfire of a daughter Diana (Gal Gadot) that she doesn’t need to be trained as a warrior. Even though the Amazons have been created by Zeus to battle Ares, the Gods were all destroyed many centuries ago.

Unfortunately it looks like Ares is also alive and doing well, thank you very much. Currently he has The Great War blazing across Europe and threatening to engulf the entire world. An American spy Steve Trevor (Chris Pine) brings this news to the Amazons after he crashes on their island in his biplane. It doesn’t take long for Diana to grab her Lasso of Truth, her sword and shield and join forces with Trevor to find Ares. She suspects the ancient god is somewhere in the thick of the war, and will stop at nothing to destroy him. But this Wonder Womanis going to find that the world is deadlier than she even imagined. Robin Wright, Danny Huston and David Thewlis round out the cast.

Yeah the movie got its share of hype when it came out, so it is hard to not to come at it with high expectations. What you get is a solid superhero origin story that doesn’t break new ground, but is well put together and paced. The engagement of the cast and the handling of most of the action scenes make the film work. Not quite a wonder, but still a fun time.

Going a bit classic with the anime juke box today. Heading back to 1987 and the original animated video series Bubblegum Crisis. While there is a crisis in the series, it has nothing to do with bubblegum. It has everything to do with rogue androids and hot women in power suits blowing them up. I've already featured one song from this fun series a few years ago, but there are so many awesome 1980s rock songs in this series that I have to share another.

This is the song that starts off the series. The band Priss and the Replicants (fun nod to Bladerunner - one of many!) are rocking out on stage. The performance is intercut with the destruction one of the androids is unleashing on Tokyo. The style of the song (and the performance sequence) is borrowed from Streets of Fire, and I think it actually makes this even better. It's a great way to start off the series, and the song is pretty darn catchy (with lots and lots of english thrown in there for good measure: "Give me touch... burning touch!")

So here is Priss and the Replicants performing Konya Wa Hurricane from the series Bubblegum Crisis. 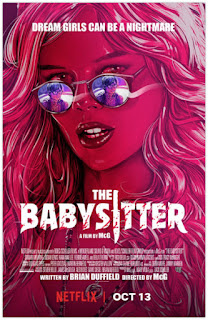 And then you see the name McG as the director of the film and a shiver runs down your spine. Not because he directed the two Charlie’s Angels films, but because he is still going around by the name McG. Still, you’ve got a horror comedy film about a babysitter who may or may not be involved in the dark arts. Well that just sounds like a fun Sunday movie to me.

Cole (Judah Lewis) is not your typical 12-year-old boy. He has overprotective parents, gets picked on at school and even has neighborhood bullies that make his life miserable. But he is able to make it through the day, and that might be because he still has a babysitter. Bee (Samara Weaving) is super sexy, has a keen knowledge of geek culture and she treats Cole like a peer. Cole thinks she is swell.

Until one night he sneaks downstairs to see what the babysitter does when he is supposed to be asleep. Turns out that Bee may be the leader of a cult! Joined by the wisecracking John (Andrew Bachelor), the perky Allison (Bella Thorne), the hulking Max (Robbie Arnell) and the mysterious Sonya (Hana Mae Lee), the five commit what looks like a full on blood sacrifice right in Cole’s home. Now it is up to Cole to escape the house of horrors, and enlist the help of the girl next door, Melanie (Emily Alyn Lind) to stop Bee and her minions. Because Cole is starting to think that Bee is more than just The Babysitter.

Did I mention this was over the top? Well that is going to make or break the movie for you. The film takes a Tarantino style and ratchets it up to 11. The gore is gratuitous, there is some very crude humor thrown in that doesn’t always land. But the heart of the film Cole and Bee’s relationship is what makes it all work. The two actors really pull it off and give the movie a bit of heart at the center of all the ridiculous hijinks.  The movie knows what it is and goes right for it. I had a great time with it.

Enjoying the content? Click and ad before you go and support this blog.
Posted by Roman J. Martel at 8:00 AM 2 comments:

And Then This Happened... Star Wars: The Phantom Menace

It is bad enough when you are hosting a nice dinner party and one of your guests turns out to be an idiot with the manners of an insane chameleon. But it is even worse when you are the dinner guest and you happened to bring the rude idiot with you. Of course, you had hoped he would act a little less annoying than usual, but time and again he proved you wrong. Jedi are known for their patience. But this, it was just going too far. Can't really blame Qui Gon here. Caption time!