The Bots are Back - MST3K Lives! 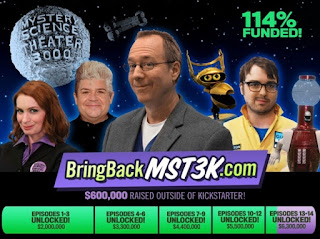 So I'm a bit late in posting this. But the Kickstart not only met the goal of 5.5 million, but surpassed it to bring 6.3 million in. It really was an amazing feat and I have to commend Joel Hodgson and his team for really making getting crowdsourcing to work for this project.

This means we'll be getting 14 brand new episodes of Mystery Science Theater 3000 in 2016. I'm really looking forward to this, especially since one episode is going to feature a Christmas film. As you know, some of my favorite MST3K episodes feature Christmas (Santa Claus Conquers the Martians, Mitchell, Santa Claus and Jack Frost all being a lot of fun).

I know some folks are really disappointed that none of the original cast (including Joel) will be back in front of the camera. But the talent Joel has assembled is impressive. I'm really looking forward to what Felicia Day brings to the table as the mad scientist and Patton Oswald as her befuddled assistant. The Kickstarter videos featured the bots and their new voices Hampton Yount (Crow) and Baron Vaughn (Tom Servo). And I have to say they are doing a great job. Finally the new host will be Jonah Ray who has also appeared in the Kickstarter videos and has some very funny interactions with Joel and the bots.

Joel has announced potential guest stars, guest writers, and even some impressive behind the scenes folks for helping this series come back. He also has made it very clear that the door is open to any of the original cast or crew to come back for cameos or guest writing. Joel feels that some new blood in front of the camera is the best way to bring new audiences to the show. And the whole production will be guided by Joel. HIs creative oversight and obvious passion for the project convinced me that this iteration of MST3K has a real shot of working. I really don't think this show will stray much from the original spirit of the series with Joel watching over it. It may take a few episodes to get everything worked out (as is pretty obvious when you watch Season One or Season Eight of the original series), but I'm hoping that this all turns out giving us more hours of hilarious movie based entertainment.

I'll keep you posted as I find out more (donating got me on the info club mailing list), but in the meantime... WE HAVE MOVIE SIGN!!!!!
Posted by Roman J. Martel at 9:39 AM 4 comments: 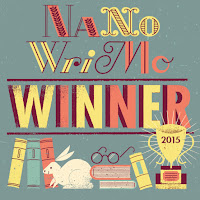 Hope everyone had a good November. If you haven't followed by Storytelling in All its Forms Blog, I did meet my goal for National Novel Writing Month. I had a great time doing it. But the novel isn't quite finished yet, so I'm going to continue working on it until it is done. I'm thinking I'll be finished in mid-December. So that means no new content on this blog for another month. But you can head over to my other blog if you are curious about my writing process or want to know what I'm listening to while I write. Hint: it involves movie music.

The other thing I wanted to mention is the exciting Kickstarter campaign to bring back Mystery Science Theater 3000! This effort is being lead by the original creator of the series Joel Hodgson. While it doesn't look like the original cast or crew are involved at this point, Joel is assembling a new cast of comedians and writers to bring back the laughs. And he's got an impressive crew signed up so far.

At this point we are good for six new episodes! So no matter what happens, we'll see those come to light in 2017. But if Joel meets his goal they are looking at a full season of MST3K, and potential for this to turn into a regular series. Now that would make my day.

So if you love the show as much as I do, check out what Joel is offering to everyone who donates (there are some sweet incentives on there) and see what you think about the cast. To me this is a no brainer. It is still my favorite television series and with Joel guiding the creative side of things, it should be a lot of fun.

Find out more at Bring Back Mystery Science Theater 3000 on Kickstarter.
Posted by Roman J. Martel at 5:37 PM No comments: