For the longest time all I know about Disney's "The Black Cauldron" was that it was the black sheep of the animated film family. It failed in the theaters and Disney hated it so much that they refused to release it ever again in theaters or on video. But at the end of the 1990's, Disney relented and released the film on VHS and DVD. Did this film deserve to be smothered and hidden away?

Taran (Grant Bardsley) is your typical assistant pig keeper who yearns for adventure. He gets his chance when the diabolical Horned King (John Hurt) discovers that Hen Wen is a magical pig who can reveal the location of the Black Cauldron. Once the Horned King has the cauldron in his possession he can create and invicible army of undead to sweep the land. Taran is tasked to with protecting Hen Wen, but things go very wrong and he begins a quest to find her. Along the way he meets the magical princess Eilonwy (Susan Sheridan), the flusterd bard Fflewddur Fflam (Nigel Hawthorne) and the obnoxiously cute Gurgi (John Byner). Will Taran and his friends be able to stop the Horned King from finding and using "The Black Cauldron"?

This was Disney's animation team experimenting and attempting to shake the doldrums they had fallen into since Walt's death. It's a worthy effort, but never really takes off. Blame should not be placed on the darker tone of the film or it's fantasy setting - but on a script that is in desperate need of polish. Had the script been better, this film might be remembered with more fondness. As it is, it is more of a curiousity for animation enthusiasts.

Total: 3
Curious about a full review, send me an email and I'll make additional thoughts to this review.
Posted by Roman J. Martel at 4:25 PM No comments: 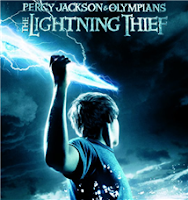 My wife started reading these books and really got into them. I read the first and was surprised how good it was. It had a fun mix of Greek mythology, humor and adventure. I figured you could make a really entertaining movie out of this. But I also feared that it could go horribly wrong. Let’s see what happened.

Percy Jackson (Logan Lerman) just found out he’s the son of the sea god Poseidon (Kevin McKidd). Turns out that all the Greek gods and monsters are real and still hanging out in our times. But things aren’t going so well for the Olympians. The master lightning bolt of Zeus (Sean Bean) was stolen and he is certain that Percy is the culprit. Now Percy has to team up with Annabeth (Alexandra Daddario) daughter of Athena and Grover (Brandon T. Jackson) a satyr to find out who really is “The Lightning Thief’.

What a missed opportunity this was. Even if I’d never read the books I’d wonder what happened here. The mythological elements are toned down, the humor is bland and almost all the character and quirkiness from the books is missing. The result is a humdrum adventure that has some pretty moments but is lacking anything to draw you in. The cast does a good job, with Joe Pantoliano and Uma Thurman stealing their scenes with relish. But the script is so limp its all for naught. Stick with the books.