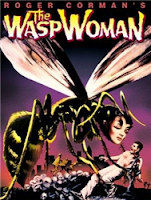 Time for another crack at the 100 Sci-fi Classics, and this time it’s another trip to Roger Corman’s filmography. Will we get the competent Roger, who can make low budget but entertaining films. Or do we get the Roger who’s editing and execution renders even a potentially interesting script lifeless and dull. Maybe somewhere in between.

Oh that nutty scientist Eric Zinthrop (Michael Mark) is at it again. He has taken the royal jelly from wasps and is using it to create an anti-aging serum. Janice Starlin (Susan Cabot) is looking for a product to stop the slide her cosmetic company is taking, so she jumps on this invention, no matter how shady Zinthrop appears. At first her secretary Mary (Barboura Morris) and one of her execs Bill (Anthony Eisley) are concerned that she is being conned. But when Janice uses the serum on herself and becomes younger and younger, they begin to wonder if the serum has been thoroughly tested. Well it wouldn’t be called “Wasp Woman” if it was, and soon employees start dying in the building and it looks more and more like Janice is experiencing some horrific side effects.

Not as bad as it could have been, but the first twenty minutes or so are slow going. Once Janice starts shooting the royal jelly into her veins things get interesting and move quicker. Depending on your tolerance for silly costumes, the Wasp Woman will ruin or make the movie for you. This ]makes for a fun time with some friends, but as a solo view – not worth checking out.

I have to be in the mood for Mr. Corman and his brand of goofiness. I think I was in the mood for this one. It was just that Corman started his movie with a long slog of a sequence that seemed to go out of its way to bore you. For the first segment of the film we end up following Mr. Zinthrop around as he tends to his wasps. We get to visit a few beekeepers as well. These scenes are filled with characters walking… slowly. The dialogue is poor and the acting is some of the worst in the film. According to rumor this sequence was added later after it turned out that the original film was too short. That explains quite a bit, because while we get to see where Zinthrop was working before he was picked up by Starlin Cosmetics, it really doesn’t add much to the film. You don’t want to start your monster movie with long shots of men walking slowly.

Things pick up a little once we get to the cosmetics company mostly because Susan Cabot makes Janice Starlin an interesting character. The script offers some ideas about public perception of women’s beauty and how age relates to it. During the board meeting some of the execs feel that because Janice removed herself from the advertising the company has been doing poorly. Janice feels she looks too old to be the face of a company that promotes youth. Both counts may be correct, and Cabot does a good job making Janice feel frustration that her age and people’s perception of her age is affecting her success. Is she vain? A little, but her concern (at least in her first scenes) is for her company. In a way I’m making this sound a lot more interesting than it turns out to be, but I want to give Cabot credit for a performance went beyond the necessity of the script.

Still things meander along with Cabot dealing with her suspicious coworkers and a very long montage sequence of Zinthrop experimenting and checking on the experiments and of meetings and floating heads. I know it’s supposed to represent the passage of time, but it really slows the already slow movie down even more. An unexpected side effect is that all the montage material is made up of sequences we have seen already or end up seeing later – it’s Frankenstein’s montage! I’m guessing this little moment was used to pad out the run time a bit more.

So by the time we get to the good stuff it feels like a drop of water in a dry land. This occurs when one of the test subject cats grows tiny furry wing-like things on his back and attacks Zinthrop. It’s hilarious stuff and is injection of fun the movie needed. After that we see Janice in her mutated form, which is really some fuzzy gloves and a extremely silly looking mask with bizarre compound eyes and antenna. When she attacks anyone she basically rubs them with the mask and they secrete what looks like strawberry preserves. Great stuff for the B movie fan. But it’s so little so late it really doesn’t do much to elevate the entertainment. You could make a fun little short film out of the material here, but Corman’s final cut is around 73 minutes long and with nearly 20 minutes of it as meandering padding – well it’s a serious blow.

Visually and sound wise there is some basic competence but there are a few scenes where the dialogue it tough to hear but as the actors move closer to the camera (and the boom) they get louder. There are also a few dark scenes where it is difficult to discern what is happening. The print wasn’t very good and some of these issues may be related to that. The music is fairly limited and in a few moments distracts from the film.

In the end, the movie is a bit of a slog to make it through. A few bright spots of Corman style humor involving the secretaries actually has some interesting dialogue, but mostly the movie just doesn’t have enough of a plot to make carry longer than 20 minutes or so. This could have been a fun episode of a television series, an extremely goofy version of the “Twilight Zone” maybe. However, if you enjoy watching low budget monster flicks with some friends there is a lot to work with here. Fans of “Mystery Science theater 3000” can seek out the “Cinematic Titanic” release of this film which features commentary by cast and writers for MST3K. I’m sure they had a blast with it. Otherwise, those looking for a good monster movie with bug women should look elsewhere.