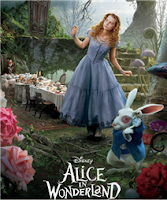 I’ve always been a fan of Lewis Carroll’s stories and world. I grew up watching Disney’s classic 1951 version of the story. I’ve managed to see several version of the tale and even played a wicked gothic video game version. When I heard that Tim Burton was going to provide his take on the story I was intrigued. But will my love for the original story taint my view of this version.

Little Alice (Mia Wasikowska) has grown up, and now at 19 she finds herself at her engagement party. When her suitor pops the question, Alice runs off and follows a white rabbit down a hole. She finds herself in a wonderful land, where everyone seems to remember her and has been waiting for her return. But Alice has no memory of this land. The Mad Hatter (Johnny Depp) does his best to guide her along her path to destiny. You see the Red Queen (Helena Bonham Carter) rules Underland with an iron fist and threatens any dissent by unleashing the Jabberwocky. Alice is prophesized to become the White Queen’s (Anne Hathaway) champion and defeat the beast. That’s all well and good but Alice doesn’t seem motivated to help. Will she embrace her destiny or become another pawn of the Red Queen?

A curious movie to say the least. With a straightforward quest plot it feels like a bit of the fun was taken out of the nonsensical world. At the same time the movie has some amazing characters and sequences that pay homage to the original stories and the Disney incarnation. It’s a mixed bag, worth checking out but not quite as good as I hoped it would be.

Total: 3
Curious about a full review, send me an email and I'll make additional thoughts to this review.
Posted by Roman J. Martel at 3:54 PM