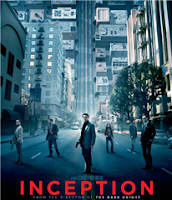 “It’s so complicated you have to see it twice, maybe even three times.” “A really amazing concept, so fresh.” “It’s a real mind f&$#.” So yeah, there’s been no hype on this movie at all. The minute I start hearing hyperbole, I lower my expectations. The last time I heard almost the exact same things about a movie – it was 1999 and the movie was “The Matrix”. I ended up being pretty disappointed. Lets see if I’m able to keep my expectations in line this time.

Dreams are the keys to the mind. If you can enter a person’s dreams you can tamper with their mind. If you can accept that premise then you can accept this movie. Cobb (Leonardo DiCaprio) is a master of entering dreams and stealing information. With the trusty Arthur (Joseph Gordon-Levitt) at his side, he’s pulled off some serious jobs. Now Saito (Ken Watanabe) hires him to enter the mind of Robert Fischer (Cillian Murphy) and pant an idea in his mind. Most dream specialists say its impossible, but Cobb insists that it can be done and that he’s done it before! So he gathers a team and prepares to enter the dreamlands. Of course nothing goes as planned. Cobb’s past begins to enter the dream world. Will this danger prevent the team from accomplishing their “Inception”?

This is not a typical summer popcorn movie. The details of the plot are important and you need to pay attention when they are explained. After that, its fun in dreamland with action scenes and visual effects. It’s a fairly good balance that makes for an entertaining time. However, the movie isn’t mind-blowing or earth shattering in any way. It’s just an intelligent popcorn film. And you know what, we need more of those.

The hype machine was in full swing for this one. Ok, maybe a little less than for Avatar but still a lot of people were really hyped for this. Me? Well I find Christopher Nolan’s films to be a bit too cold for me. I never get drawn in completely to them. I enjoy them, but I never love them. As you can see, the same thing happened here.

Still there’s a lot to like here. The cast is uniformly good. Leonardo DiCaprio plays Cobb very similarly to the character he played in Shutter Island. Both men are haunted by their past and find it difficult to function in the world because of it. Cobb is a cool professional who finds his skills being affected by his guilt. Guilt is manifested in visions of his dead wife Mal (Marion Cotillard). Cotillard brings a nice mix of alluring and disturbing to her performance.

I also got a kick out of seeing Joseph Gordon-Levitt: action hero. He kicks some serious butt in this movie, firing automatic weapons, and partaking in the best fight scene in the movie, the zero G hallway battle. On top of that he’s the guy who tries to keep everyone grounded: the voice of reason in the chaos.

My only issue was Ken Watanabe as Saito. I really wish they had let him speak in Japanese and subtitled him (although that would have scared away too many viewers). His accent is a bit thick and when he’s competing with the explosions, gunfire and Zimmer’s blaring music score, it can be hard to understand what he’s saying. This wouldn’t be too big of a problem, except he’s got some very important lines. I was able to muddle through based on context, and Watanbe’s actual performance is fine.

Action fans will be happy with the second half of the film. This movie has a bit of everything. It’s got stunt driving. It’s got shootouts. It’s action on skis and in the snow. It’s got the zero G battle. It’s got a commando style raid on a secure compound. It’s all handled very well, with clear but exciting action scenes. Jiggly cameras and annoying zooms are kept to a minimum, and it’s all for the good. The sound works great too, immersing you in the action, if sometimes drowning out the dialogue.

Nolan had a tough job here, balancing an interesting concept with lots of details with a movie that people expect to be action packed. He does a very good job, making most of the explanation scenes work organically into the story. You always feel like things are moving along even as the characters are explaining how dreamland works. In all this he injects Cobbs history and creates a solid climax out of it. On top of that, we are in Fischer’s brain for a big chunk of the movie, we get to know about him too. My hat is off to Nolan for pulling this off. In the hands of a less skilled director, this could have been a real bore until the action kicked in.

But a few things kept me from really getting sucked in. First is the music. Hans Zimmer does his usual here, with some good atmospheric music and propulsive action music. It works well with the film and never draws attention to itself. It frames the movie and provide another layer of sound. That’s exactly what Nolan wants in his movies and it works most of the time.

There is one little element in the score that just rubbed me the wrong way. I’ve heard other people call it other things, but I’ll call it - BWAAAAA! This little sound appears in the score on a number of occasions, usually when some revelation is occurring or when we are deep in dreamland. The arrival at the deepest part of the dream world is heralded by a number of BWAAAAA! This sound could easily be substituted by – bum Bum BUM! You’d get the same affect – at least from me. It made me laugh. At dramatic parts of your movie, you don’t want the audiance laughing.

I know what the BWAAAAA! Is. A song by Edith Piaf is used in the movie as a way to signal the dreamers. The song opens with trumpets. Take one of those trumpets and slow it way, way down and you get BWAAAAA! Kinda clever actually. I see what Zimmer had in mind and it makes sense. But I’m sorry it really took me out of the film. Now I have met a few people who don’t know what I’m BWAAAAAing about, so don’t feel bad if you missed it.

Then there’s the aspect of the final sequences of the film. This is hard to explain without giving too much away, and really it’s a nitpick. I found the final half of the film dragging a bit. There are lots of action scenes going on at once and in between are scenes where we see the dreamers asleep. This is done so that the audience gets an idea of where in time all these things are happening. I actually started to find the scenes with the dreamers really disruptive to the flow of the film. I think I’m in the minority on this one, but I found the second half of the movie a bit clunky. Still it must have been hard to figure out how to orchestrate this and not lose an audience. I’m just wondering if there may have been a better solution.

The final bit is really based on my expectations. I love dreams and their use in film. Some of my favorite directors can capture the feel of a dream or nightmare and the results are amazing. Nolan never really captured that feel in my opinion. We get cool visuals, some really neat fighting sequences, but that actual feel of a dream – I never felt it.

Compared to masters like David Lynch or Satoshi Kon, the dreams never really took off. I felt like this was a serious missed opportunity. I think I know the reason why the movie never went there (and even included rules to keep it from going there). Most people don’t know who the heck David Lynch or Satoshi Kon are. Their films aren’t popular and usually the reason is because they just plain weird. I love their stuff, but I can understand why others don’t. Lynch and Kon understand that dreams don’t operate by rules and this allows them to take flight in their films. Nolan forces rules so people will enjoy the fantasy and never feel the weirdness. That’s the difference. Nolan created a fantasy film about dream worlds. Lynch and Kon create films about dreams. I feel that if you are really going to delve into dreams then do it. Rules for dreams? That’s like making a bland dessert.

Sounds like I came down a bit hard, but honestly I enjoyed the film. I wish more popcorn movies had this amount of thought put into them. Since the movie is doing well, I think most viewers wanted something like this too. My issues with the movie are based on my expectations and the hype. Yeah I let it get to me. Still, this is a good movie, with some real highpoints. But not the best movie I’ve seen this year, much less of all time. Nolan’s going to have to warm up a bit to pull me in. But I admit, this is the most accessible film he’s made yet.