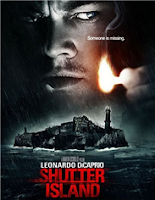 Martin Scorsese directing a thriller with supernatural elements? Count me in. But a quick look at reviews for the film show quite a mixed response. Did something go wrong, or did viewers expecting something other than what they were getting.

I the early 1950’s, U.S. Marshall Teddy Daniels (Leonardo DiCaprio) and his partner Chuck (Mark Ruffalo) are sent to Shutter Island to catch an escapee. Shutter Island is an Alcatraz for mentally unstable criminals. Upon arriving they meet psychologist Dr. Cawley (Ben Kingsley) who is using radical techniques to reach his patients. But Teddy has another reason for heading to Shutter Island, and his secret may unravel events that plunge him and Chuck into a dangerous conspiracy or worse cause them to lose their minds.

Scorsese’s skill behind the camera helps craft an interesting thriller. He knows how to get great performances from his actors. This is one of those movies that could have been an average thriller with a different person at the helm, but Scorsese kicks up some good tension in places. While this is not an instant classic, it’s a solid thriller for movie night.

I’m not sure what people were expecting when they saw this movie. Something more like “The Departed” or maybe “Goodfellas” with ghosts? From the trailers I thought this was more of a supernatural thriller, but it’s really more of psychological thriller. The setting of a mental institution introduces many variables into the equation, and these drive the tension. So if you’re looking for ghosts or spirits, this movie isn’t going to provide them. But if you like mind games, then this will be worth seeking out.

A quick note to anyone who’s read the novel: my wife read it and said that the movie follows the plot very closely. She also said that this affected her enjoyment of the movie because it was too predictable. I didn’t read the book and enjoyed it a bit more than she did.

I realized that good performances were going to be the key to this film. You have to believe the characters and start to see things from their point of view. Not only does this keep things intense, but it allows the plot twists to deliver the punch they need. The cast is exceptional here with DiCaprio being the focus of the story and therefore getting the most screen time. We understand Teddy, He’s a veteran of the European front of WWII. He was part of the group that liberated concentration camps and what he’s seen there haunts him. Throughout the movie his experience colors his options and reactions to the events around him. It’s a juicy part and he pulls it off well.

The supporting cast is just as good with Ruffalo providing us with the nice guy Chuck. He’s driven to help Teddy, but as the movie progresses we begin to wonder about his motives. Ben Kingsley appears to be a man who genuinely wants to help the mentally ill and do it in a way that will be the least invasive. But there is something off about him – a secret he’s hiding. I also enjoyed Max Von Sydow’s small but key performance as a doctor who may also have a past in WWII, but on the other side. I’m leaving out several key performances by very good actors, but no one is wasted here and it all works for the good of the film.

Scorsese uses color and framing in excellent ways. For the most part the sets, clothing and even the water around the island are shades of grey and dull brown. It’s a washed out look that adds to the atmosphere. But when dream sequences and hallucinations kick in, we get startling use of color. Rich greens, reds and blues pop off the screen and give us a touch of unease. Scorsese uses some clever special effects and simple in camera techniques to add a surreal touch to these sequences. I also enjoyed the way he framed shots, often putting Teddy in a shot isolated amid a grey sky or a black background. Teddy is a man apart from the rest of the world both in character and visually.

Not all the choices work to the advantage. A few moments of odd editing makes a viewer wonder if scenes were hastily cut, or if they blinked and missed something. I think Scorsese was trying to heighten tension with these erratic jumps, but it actually was distracting, removing me from the film.

Then there were the music selections. Instead of hiring a composer, he opted to pick existing music and place it over the scenes. Some of it is very good, like the pieces by Mahler. But some of the selections are so badly placed that it amazed me. The worst offender happens at the beginning of the film as Teddy and Chuck arrive at Shutter Island. The music sounds like something you hear during a terrifying climax, as the horror reaches its apex. But instead it’s used over a simple driving scene. The effect is comical. A creeping dread style of music would have been much more effective than bombast. I’m sure Scorsese knows that, so it was probably intentional – but I’m not sure what he was trying to do there. Make the audience laugh was probably not on that list.

A thriller’s effectiveness is measured by how drawn into the film you are. If you are at the edge of your seat wondering if your lead character is going to survive then the movie has done its job. “Shutter Island” works in fits and starts. Certain sequences are excellent and others (those affected by the edits or music choices) pull you from the film. This breaks up the flow and reduces your chances of getting really scared. To see it done right, check out Hitchcock’s “Rear Window”.

What this boils down to is that “Shutter Island” ends up working for a good portion of its run time and is entertaining. It just doesn’t feel as good as it could have been. I recommend it, but don’t expect to be blown away.