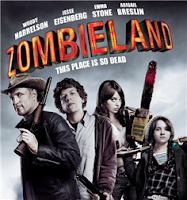 Abigail Breslin in a zombie movie? Well that sounds interesting. Oh hey its got Woody in it too, and the guy from “Adventureland”. Well that’s pretty cool. Bill Murray? Wait a sec, what kind of movie is this?

Zombies have overrun the earth. A young man who goes by the name Columbus (Jesse Eisenberg) has survived because he sticks close to his rules of survival, including gems like “Limber up”, “Avoid bathrooms”, “Don’t be a hero” and “Cardio”. He eventually runs into Tallahassee (Woody Harrelson) a man who’s obsessed with finding an edible Twinkie. The two team up and eventually meet the duo of Wichita (Emma Stone) and Little Rock (Abigail Breslin). They two are on a quest to Pacific Playland, the only amusement park that is supposed to be zombie free. Their journey will take them across the country and face to face with zombie hordes. But the real question is how does Bill Murray fit into “Zombieland”.

This is a fun little movie that breezes right along giving you laughs and action in equal doses. Those looking for scares need not apply, but you do get some gruesome zombie deaths. All the cast seems to be having a good time and it oozes like zombie gore into the audience.