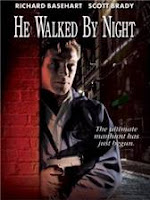 Time for another dive into the 100 Mystery Classics. A quick description revealed that Richard Basehart was the killer in this film. Jeez, talk about spoilers. Is it even worth watching if we know he did it? Turns out there was a lot more to this movie than meets the eye.

Roy Morgan (Richard Basehart) finds his burglary attempt foiled by an off duty policeman and the officer is shot. Now the full force of the Los Angeles police department is on coming down to find him. Sgt. Brennan (Scott Brady), Captain Breen (Roy Roberts) and Sgt. Jones (James Cardwell) take on the case, following clues and trying to tie together crimes to find the killer. But he seems to always be one step ahead of them. But even a careful and intelligent criminal leaves some evidence – soon the police are closing in, but Morgan isn’t going down without a fight.

This movie was a pleasant surprise. It was very interesting to watch the police work with clues and evidence in a way that reminded me of current “CSI” shows. It gave the movie a realism I wasn’t expecting. It turned into a game of cat and mouse, with Basehart providing a excellent performance as the confident and dangerous criminal. Anyone looking for a solid police procedural will find a lot to like in this film.

This movie was a pleasant surprise. I was pulled in quickly and completely involved in the case. I admit I was expecting more of a mystery film, and got a police procedural, but once I adjusted my expectations, I wasn’t disappointed at all.

Visually this is almost film noir, with Basehart hiding and emerging from shadows. In an especially tense scene he creeps into the business of Paul Reeves (Whit Bissell). As he watches and manipulates the events, he is filmed backlit, or peeking into the light. The angles and camera placement are perfect to build tension and keep things interesting. The chase scenes through the Los Angeles sewer system stand out as well. The huge tunnels and flashlights reminded me vividly of a 40’s version of the “X-files”. Interestingly enough Carol Reed would use very similar techniques and shots in the Orson Wells classic “The Third Man”.

Sound effects and music are utilized well in the film. Nothing really stood out, but the music did a good job of raising tension and keeping the pacing moving, even in scenes that dragged a little. As impressive looking as the tunnel sequence is, it does run a bit long, but the music helps keep it flowing.

For me Richard Basehart provide a big surprise. I wasn’t sure what to think about him playing a villain. I’m used to seeing him as the noble leader, or wise elder. But a killer without a conscious? Basehart plays Roy with his eyes. Many of the great scenes provide close-ups of his face. His voice is calm, often cool and detached. But his eyes betray confidence and cunning. You believe that this man can outwit the police and takes pleasure in doing it. It’s a great performance and it really makes the movie work.

Fans of classic television will get a big kick out of seeing Jack Webb as a cop, but not in “Dragnet”. This movie was filmed before the radio show or television series of the famous police procedural. But word is that Webb was inspired by his work with the police advisor on the set of this film to come up with the idea for “Dragnet”. In this film Webb plays a scientific evidence inspector. Basically he’s the Gil Grissom character from “CSI”. His research provides several keys to the investigation, including ballistics tests, indentifying chemicals found at a crime scene and even coming up with a way to create a composite of the criminal using various descriptions and individual slides of face elements. Amazing that this idea is shown in 1948 and is shown as high tech (and with computer aid) in the 1981 James Bond film, “For Your Eyes Only”. Webb plays the character as an amiable guy who is very good at his job. A bit warmer than the character on “Dragnet”, but its fun to see him in a role so similar to the one he’s famous for.

The rest of the cast does a solid job. All the actors in the police roles are believable and bring humanity to their parts. The police try to do the right thing, but are often stopped by evidence, laws and just bad luck. The script and actors do a good job showing us that police work can be frustrating and dull at times, especially when it comes to all the footwork needed to solve a case. Whit Bissell provides a memorable performance as factory owner, Mr. Reeves, a decent man caught up in some dangerous business and who gets himself on everyone’s bad side. You feel a bit sorry for the guy by the end of the movie.

Director Alfred L. Werker takes all the elements and turns them into a entertaining film. It’s a bit of a task to keep all the story threads flowing and understandable and build closer to the resolution. Werker is up to the task generating moments of tension when he needs to. Both scenes where Roy confronts Mr. Reeves are excellent, with the viewer not knowing how the chips are going to fall. He keeps Baseharts performance low key but edgy and it makes all the difference.

The only misstep is the length of the climax. The sewer tunnels are impressive and make for a great backdrop to play against, but the chasing and running goes on a little too long. I get the feeling that the cast and crew wanted to show off the location, but it ends up stalling a bit in momentum. The movie itself seems to end abruptly without an epilogue or wrap up of some kind. It’s not a deal breaker by any means, but struck me as odd. Compared to the similar “L.A. Confidential”, the wrap up after the climax provided a satisfying ending to the edgy film.

Needless to say I really enjoyed “He Walked by Night”. Fans of police dramas and procedurals will enjoy this early take on the material. Fans of Richard Basehart should check out his excellent turn here. And fans of “Dragnet” will like to see a proto-type version of the classic radio series and television show. Fans of good black and white films – well you can’t loose here either.

James Lileks seemed a little ho hum about it here.