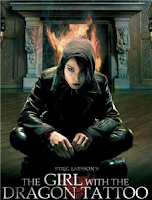 Another movie with a very good buzz around it, “The Girl with the Dragon Tattoo” was based off a best selling Swedish novel, one that is also doing quite well in its translated form in the states. It was only a matter of time before the movie (and a remake) were brought to US shores. But can a foreign murder mystery really be that interesting?

Mikael Blomkvist (Michael Nyqvist) is a reporter who was just successfully sued for libeling a high powered industrialist. With a prison term awaiting him Mikael is offered a job by Henrik Vengaer (Sven-Bertil Taube), a man of great wealth and power. He is seeking his favorite niece, Harriet (Ewa Froling) who disappeared years ago under mysterious circumstances. As Mikael begins his investigation he discovers that a young computer hacker named Lisbeth (Noomi Rapace) has breached his computer and is helping him out. Pieces to the puzzle fall into place, and it each new clue leads to a tale of men who hate women and enigma of “The Girl with the Dragon Tattoo”.

You want solid believable characters and a compelling story, this is the movie for you. Top notch acting pulls you into the tale and the measured pace gives you a chance to get a feel for the leads and their world. At nearly two and a half hours, you’ve got to be ready for some serious subtitle reading. But its well worth the effort.

Total: 4
Curious about a full review, send me an email and I'll make additional thoughts to this review.
Posted by Roman J. Martel at 4:26 PM