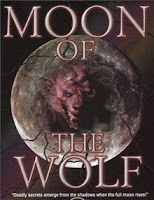 Werewolf movies can be pretty fun. You’ve got your guy running around with fur on his face. You’ve got the terrified populace. You’ve got the full moon and unearthly howls. It’s kind of hard to screw that up. But as the MST3K episode “Werewolf” proved, it is possible. How will this offering from the 100 Sci-fi Classics stack up?

In a small southern town Sheriff Whitaker (David Janssen) has a problem. A body of a young woman is found torn to shreds in the bayou. Soon suspects begin to surface. Was it her love Dr. Druten (John Beradino)? Perhaps her brother Lawrence (Geoffrey Lewis) had something to do with it. Or maybe the ultra rich and ultra snobby Andrew Rodanthe (Bradford Dillman) is hiding something. To complicate matters, Louise Rodanthe (Barbara Rush) comes back to town and takes a shine to the Sheriff. But she holds secrets as well, and do they have anything to do with the “Moon of the Wolf”?

You’ve got your basic made for television werewolf movie from the 1972 here. You know what the entails. It goes on a bit long with the talking, and the scares are strictly of the “Night Gallery” variety. That said, it’s an effective film with some creepy undertones. If the mood strikes you, it’s an entertaining little movie.

Once you get past the bad day for night filters in the first couple of scenes you’ve got a pretty solid movie here. As I mentioned above, it very much reminded me of “Night Gallery” in tone and style. That can be a good thing, because “Night Gallery” had some solid episodes. Of course it had some bad ones too.

Visually it looks like a made for TV production. It lacks the glossy look of a theatrical film, or the trashy look of a drive in quickie. Instead it’s got that television look, hard to describe but immediately identifiable when you see it. The clothes are oh so 70’s, especially the gowns that Barbara Rush wears. Most of the men sport sideburns of various shapes and sizes. There is nothing too innovative with the camera work, but when the creepy stuff comes down in the last fifteen minutes or so, its framed well. The chase in the mansion is handled with some skill. On the audio side, everything sounds just like you’d expect, from the howling wolf to the night sounds of the bayou. The music isn’t intrusive either, just enough of it to raise tension. Interestingly it avoids some of the more funky stuff you could get in 70’s movies (listen to the music in “Mitchell” for a sample of what I’m talking about).

Acting-wise everyone is effective. No one stands out as either too good or too bad, just the right balance is achieved. David Janssen plays the southern Sheriff as the type of man who knows and likes everyone in town. He’s a protector of sorts and sees the murders as an affront to his skills. He gets a bit of romance with Barbara Rush, and it works well enough. Rush plays her character as a woman who is caught under the oppressive hand of her family. She doesn’t live up to their expectations and so they look down on her. She seems a bit too old for the part, but she is closer to Janssen’s age, so it works out fine.

Things get a bit wobbly in the story and direction department. These are tied together because the story itself is pretty thin. The sheriff discovers the murder, searches for clues, determines that it might be a werewolf and hunts down the suspect. It’s not quite enough to fill in the needed 75 minute running time, so the story is padded out with interpersonal drama. Some of it is between the Rodanthe family, some of it is between Dr. Druten and the Sheriff, some of it deals with the brother of slain woman and her father’s superstitious take on the werewolf. Parts of these story lines could be interesting, but they feel like padding.

Director Daniel Petrie does his best but it’s the padding scenes that do him in. There is only so much you can do to make long talky scenes work. For a while the movie stops being a horror film, or a murder mystery and turns into a small town drama. It breaks the momentum and keeps the movie from really talking off. I think Petrie was working in television constraints and did his best, but the movie could have used a tighter script and a bit more time in development.

That said, when the movie is focusing on the mystery elements and the horror elements Petrie pulls it off. The finale at the mansion is well done, and even if some of the characters make the typical dumb horror movie mistakes, it never becomes a true groaner.

“Moon of the Wolf” was much better than I hoped. 70’s movies can really bog down in the pacing department – and TV movies even more so. But the mystery of the werewolf identity was fun enough to work. And even when things got too talky there are plenty of 70’s cloths, furniture and sideburns to enjoy. Gather a few friends over and the movie is good for your own riffing session. But on it’s own it’s solid entertainment.
Posted by Roman J. Martel at 3:36 PM