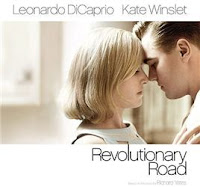 Even though I'm not a big fan of "Titanic", I was interested in seeing this movie. A lot of the marketing stressed how it was a reunion of Kate Winslet and Leonardo DiCaprio. More interesting to me was that Sam Mendes was directing. His work on "American Beauty" and "Jarhead" was excellent. Kate Winslet always turns in an excellent performance, so it seemed like a good match.

Frank Wheeler (Leonardo DiCaprio) and his wife April (Kate Winslet) have just about everything an American family in the 1955 would want. Frank has a good job with an eye on a promotion. They have a lovely house on Revolutionary Road. They have children they love and friends to spend time with. Of course all this perfection can't remain, and it becomes obvious that it is an illusion. A need for something new begins to drive the Wheelers, at first uniting them in a common purpose. But after a life changing event occurs Frank and April are at odds and each moment drives them apart and toward tragedy. Is there any way to escape the dark fate on "Revolutionary Road"?

This is a well-made and thought provoking film. I certainly recommend it, especially to see some excellent acting from Winslet. Mendes handles the material very well, creating an environment and characters that are fascinating and yet repellent at the same time. Not an easy film to watch but one that you probably won't forget.

Movies like "Revolutionary Road" are tough to recommend. Some people are just going to hate this type of movie. It's not uplifting. It's very cynical and thematically dark. The characters are too realistic, reminding viewers of themselves in many cases. Some may not want to see what Mendes is expressing here and feel that he is attacking the American way of life. Others will just be upset that this is not the romantic escapade that the trailers seemed to promise.

"American Beauty" had the same affect on people when it came out. A lot of people hated it for a number of reasons (and some of them are perfectly valid). But I always suspected that the main reason people disliked it, was because the mirror was a little too accurate. Mendes takes a different approach, but basically has the same message here.

Based on the novel by Richard Yates, the main thrust of the film is that not everyone is going to find happiness and joy in the "ideal family life". When people try to do something different, society seems to go out of its way to crush those ideas. What is interesting with "Revolutionary Road" is that the use of the 1950's period distances the viewer but also adds another dimension. For many, the 1950s were the high point of American culture, influence and prosperity. So show such a dark and rotten heart at the center of this 50's family is very cynical.

Mendes has a great eye for setting up shots and executing sequences for maximum affect. It was one of the great things about "American Beauty" and "Jarhead". Certain scenes stick out in your mind, either because they are symbolic, standing for several elements of the film, or just because they create an image that is striking. "Revolutionary Road" is filled with these moments. The house the Wheelers eventually purchase and live in is filmed in such a way that it is lovely and cold all at the same time. The movie's themes may be dark, but the house is filled with light and very open. But in many ways Mendes, uses the house to show other things. There is a scene where April is wandering through the house and it seems so lonely and empty. The lighting, the angles and Winslet's acting contribute to this quiet and horrifying scene. It captures despair so well and yet does it so simply. That is what Mendes is good at.

His use of music and sound are less obvious. The sound work is just about what you'd suspect. Mendes avoids any showy sound design and keeps things grounded. It works well for the film, but doesn't stand out. The score is a mixed bag. It's very subtle, creeping in and adding texture to scenes. There is a main theme, and it is interesting, but sparse. It works fine in the film, but as a stand-alone listen, I don't' think it will be that appealing.

Mendes has a solid cast here. Both DiCaprio and Winslet are top notch. DiCaprio has grown on me in last few years. He did some solid parts in his youth but seemed limited as an actor. I was one of the few that found him out of his depth in "Titanic". But he impressed me in "Catch Me If You Can", and then again in "The Aviator". By the time I saw "The Departed" I had to admit that he was much better than I originally thought. In this film he's very good, capturing the youthful fire of Frank in scenes where he is starting his life with April and stretching into the scenes where he is at odds with his wife and growing further and further from her. He keeps the man believable. I always understood why Frank did what he did, even if I didn't agree with him. DiCaprio's performance is commendable.

Kate Winslet is really the powerhouse here, and honestly her part is much more juicy. April travels a similar road as Frank, sharing the initial attraction and love of the young couple. But her role as a wife and mother in the 1950's allows her for less expression and less freedom than her husband. When things start to go bad, she doesn't have an outlet that is socially acceptable (Frank can get drunk and sleep with secretaries - its expected. But a wife and mother could never do such a thing). As the minutes pass during the film you see Winslet slowly becoming more and more desperate and yet doing everything she can to suppress it. By the end of the film, it is painful to watch her performance, because it is too real. It's a top-notch job, one of the reasons she is one of my favorite actresses. She never goes over the top with her part, but performs in a way that allows you to believe her character and bond with her.

The supporting cast is up to the challenge, with Kathy Bates being other big name in the cast. She serves as a foil and friend for the young couple. Her family has it's own issues and we see how they are handled, in a way that is socially acceptable even if it is questionable in it's resolution. A scene with her at the end of the movie serves as a coda to the film, and is very telling.

I've already mentioned that this is not an entertaining film. It's got a message and it delivers it. The production and cast are very good. But the story and themes are not appealing or uplifting. This is a tragedy, pure and simple. Unlike "American Beauty" or "Jarhead" where the darkness was tempered with humor and inventive fantasy sequences, "Revolutionary Road" is cold and cruel in its approach. The black humor is gone and in all that is left is a movie about a family that is destroyed by themselves and the ideas they feel they must live up to. This is a very sad film, but worth seeing.
Posted by Roman J. Martel at 10:54 AM