Summary
Alas poor Hamlet (Maximilian Schell)! His mother Gertrude (Wanda Rotha) has married his uncle Claudius (Hans Caninenberg) after the untimely death of King Hamlet Sr. One night the ghost of Hamlet’s father appears to Hamlet and declares that Claudius not only stole the queen, but also murdered the king. Now Hamlet must determine if the ghost is telling the truth all the while dealing with his grief. This causes him to act very strangely – disturbing his fragile girlfriend Ophelia (Dunja Movar). Several monologues later, Hamlet decides to spring a clever trap to reveal is Claudius is the killer. If the guilt falls on Claudius, Hamlet will exact his revenge. But if Claudius is blameless, then the ghost is obviously a demon. Who will be left standing after revenge is complete for Hamlet – The Prince of Denmark?

Shakespeare is universal. His stories and the way he tells them have inspired productions across the globe. Sure we are familiar with some of the more famous film attempts – Olivier, Branagh or Zefferelli. But even legendary Japanese director, Akira Kurosawa, found the story of Hamlet inspiring enough to adapt it into a twisted tale of Japanese politics and business for his film The Bad Sleep Well. So it really should come as no surprise that there is a German version of the play, with Maximilian Schell in the role. On the surface it sounds like a good thing – an interesting take inspired by Germany post World War II.

I’ve seen poor productions of Shakespeare (and have performed in a couple too). One of the worst I’ve seen was a version of Macbeth that was inappropriate on every level – from the acting down to what I will loosely call costumes. I’ve never wanted to riff a production as badly as I wanted to that night. But I held my tongue, in case family members wouldn’t have appreciated my comments.

Filmed entirely in black and white for German television, everything about the film is depressing. The set is abstract, with ramps rising here and there. Blocks of what look like concrete and rebar approximate thrones (that description sounds much more interesting than what you see). A dais here, a cross over there, and mostly shadows and black curtains. I can see what they were trying to do, allow the acting and faces of the characters to stand out more against the darkness and sparse set. That works fine if your actors can keep things compelling.

That just isn’t happening here. The first huge problem is that the entire film is dubbed. I’m still not sure if the film was recorded with the actors speaking in German and then dubbed into English, or if they were speaking the lines in English and then dubbed again in English. Either way they’ve almost all been dubbed by another actor. Maximilian Schell’s familiar voice is the exception to this; he appears to have dubbed his own lines. But take Claudius, for example. If that isn’t Ricardo Montalban doing is voice – well then I’ll throw back my head and yell “Khaaaaaaaaaaannnn!” This dubbing is half hearted at best and just droning at the worst. One of the funniest parts of this film (not on purpose) is to hear the voices of the play within the play. These people don’t care, don’t’ know what they are saying and just spout out the Bard’s lines like they are reading ingredients off the back of a candy bar wrapper. Hamlet and Claudius are the best of the lot, but even their work is very poor. 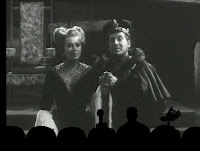 Then there are the odd camera choices. I’ve mentioned the lighting before, but there are other odd things. During the whole encounter with the ghost, the camera stays on Hamlet – the whole time. The ghost talks on and on and on, in a dubbed voice sounding like doped out Yogi Bear. We see Hamlet, um reacting I suppose. But it looks more like Schell thought the camera was going to be on the ghost, so he’s just kind staring for a while and then looking mildly anguished – or maybe it was indigestion. Why the ghost isn’t shown during this scene is beyond me. You do get to see the ghost earlier and even if he is dressed like a drag queen, it would make things more visually interesting than staring at a close up of Hamlet’s un-emotive mug. The play within the play pulls the same thing. We see Claudius and Gertrude watching the play and Hamlet leering like an imbecile behind them. The droning actors go on and on and Claudius looks more and more constipated – but other than that it’s as dull as dull can be.

Are there any good points? Schell has moments where he isn’t over acting or under acting. They are few, but they are mildly effective. He is a huge fan… of… the… dramatic… pause. As we know Hamlet gets a ton of long speeches – well Schell manages to make them even longer. I wanted to keep this positive, so I’ll say that when he’s on, he’s not bad. Also not bad is Movar as Ophelia. She’s cute and does a good job in the role, both in the early scenes when she’s obviously pining for Hamlet and later when she’s gone off the deep end. Her dubbing is passable, but runs into the issue of sounding bored or just reciting words at times. I feel bad judging her too much since she died a couple years after this was made, and rumor has it that she killed herself. Franz Schafhetlin as Polonius has some funny looking hair. Dieter Kirchlechner as Laertes looks like Duran Duran singer Simon Le Bon. And then there’s Gertrude with her clown hair and bugged out eyes has to be seen to be believed. Was this supposed to be a surreal horror film?

Shakespeare can be tough to perform and Hamlet is often considered one of the tougher plays to do well. You need all your aspects to work together and to keep in mind that you want to entertain the audience as well as deliver that cathartic pop that all good tragedies can deliver. This film has none of those elements. It’s supremely dull. It’s dreary. It’s full of itself. It’s really the opposite of entertainment. It’s a challenge that Mike and the bots couldn’t resist.

This has to be the most controversial episode of the entire run of Mystery Science Theater 3000. This episode divides people as no other does. When the worst episodes of the show are discussed, this one is always added to the list, if not at the front of it. Those who dislike it site the dullness of the movie, the fact that it’s Shakespeare and that makes it too interesting to riff, or that it goes against the very concept of the series.

For the most part, those that enjoy the episode tend to really enjoy it. Maybe not putting it in the top 10, but certainly in a place as one of the most unusual and entertaining episodes of the season and the whole run on the Sci-fi Channel. I fall into that camp. For me, Hamlet is a favorite episode.

This episode has simple gags like the moment where Laertes and Hamlet give each other the evil eye and the bots grumble “Loosertes”, “Craplet”. And it has ones that play on the words of the Bard themselves. Such as inserting extra phases into the famous “To Be or not To Be” speech. As Schell pauses dramatically after saying “To sleep, perhaps to dream!” adding extra emphasis on DREAM! Mike adds “The impossible DREAM!” It’s got comedy for the fans of the English major in the room as well as the neophyte.

To be honest sometimes the film defeats them. There are a few long stretches without riffing (sometimes because the speechifying is going on and on and on). Also, this movie is so dreary and dull that it does threaten to overwhelm any joy you may have in your life. A few other movies fall into this category (Red Zone Cuba, Monster A Go-go), and it takes some serious riffing energy to pull it off. In this case there are some really bright moments, but also quite a few quiet ones.

What this episode really boils down to is a challenge for the crew at MST3K. I think that the idea of tackling one of the greatest dramas in the English language appealed to them. They knew It was the end of the run for them. Why not do something different and unexpected? Why not tackle a really horrible version of Hamlet and see what happened? At heart most of the crew at Best Brains are well read and well versed in movies. I can see the appeal of tackling this type of thing.

But it really turned against them. So many people find this episode to be unfunny and completely boring. I’ve heard some people call it pretentious and self-indulgent. In a way I can see it. This episode wasn’t done with the fans in mind – I think it was done for the cast and crew.

When it came to the host segments things are really mixed. The episode starts off with the bots trying new names like Htom Sirveaux and Crue. Then Pearl reveals her plot to infect the world with a deadly virus. Mike distracts her with a game a three card Monty. At stake, if Mike wins he gets to pick the movie. If he loses, him and the bots will be infected. Pearl is easily bamboozled and Mike picks Hamlet. Little did he know what he was in for. This whole sequence is very amusing with Mary Jo really working the comedy as Pearl, and Kevin playing Bobo perfectly.

At the first break the bots try to scare Mike by being the ghost of his father – it doesn’t work too well. The next break has Tom and Crow performing various avant-garde versions of Hamlet – the all furniture version sounds interesting. At the next break it’s time for the new game show, “Alas Poor Who?” The bots must guess the identity of a celebrity from one of their bones. Don’t forget to put your answer into “Alas Poor” form. The game show sequence is so silly and dumb, you can’t help but laugh. After the movie ends, the bots show off their Hamlet action figure. At Castle Forrester, Prince Fortenbras shows up and demands to say his lines. Pearl sets him straight.

What it all boils down to is this. You are either going to find Hamlet to be amusing and worth checking out. Or you’re going to find it a real slog and maybe an episode that puts you to sleep. There doesn’t seem to be much middle ground. I think it helps if you enjoy Shakespeare (and Hamlet in general). I also think it helps to have a sense of humor about the Bard and his work, as well as those who attempt to put it on and don't quite manage.

I’ve run into a few people who still dislike it for all that, but I think it helps you appreciate what the show was trying to do.

Alas, I can not give it five stars. Instead I give this episode four Yorik skulls out of five. I knew it Horatio.

This episode is available on the Mystery Science Theater 3000 Collection Vol 4.
Posted by Roman J. Martel at 6:33 PM