James Bond stopped being cool around the 80’s. As much as I love the 80’s Bond films (for the most part, there are a couple stinkers), I admit that they are a little too edgy to be the high tech cool machines that earlier Bond films were. Those wildly over the top adventures in the 1960’s cemented James Bond’s place as cultural icon. Movies like Goldfinger and Thunderball in the 60’s and The Spy Who Loved Me and Moonraker in the 70’s were fantastical adventures of the comic book variety.

They pulled in the younger crowd and that crowd decides what is cool. The 80’s never really had a chance for that, mostly because Bond was avoiding fantasy for the most part and settling on more realism and edge. When things went over the top, they did it in a cheesy way (see Octopussy or A View to a Kill). Dalton had a moment of coolness, with his kick ass ice chase scene - but his Bond was never about cool, it was about danger.

Now Brosnan comes along and he’s got cool covered, and so Bond is cool. I’ll admit it has a lot to do with the actor playing the part. Brosnan fit his time, bringing what audiences craved to the role, the sly humor and killer edge. All he needed was something to make the younger generation buy into him. Surprisingly it wasn’t the movie Goldeneye that did it. I remember the immediate reaction to the film was, “It’s pretty good. Brosnan’s not bad. I enjoyed it. I wonder what the next one will be like.” People liked the film, but didn’t seem to love it. But then two things happened that make Goldeneye “the Bond movie” of the 90’s. 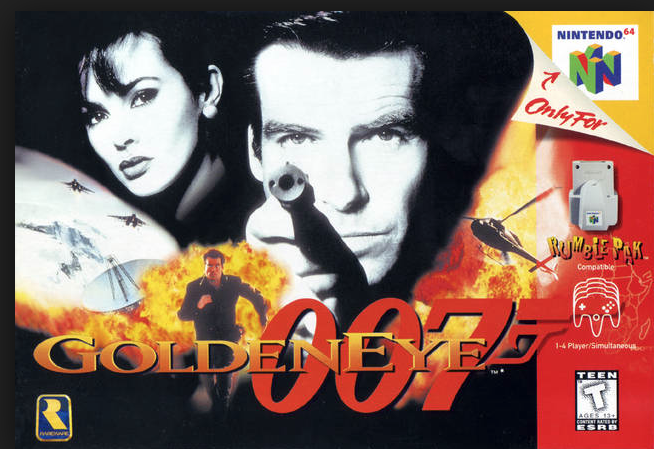 The first was the Nintendo 64 videogame. Goldeneye revolutionized video games with its innovative take on the first person shooter (you control a character armed with guns, giving you the point of view of the character). It put player into the action, into the movie and into the world of James Bond. It was as if you were fighting 006, or Xenia. Or even better invite a few friends over and play head to head to head to head. Suddenly the four of you are racing around, searching for the best guns, picking your favorite Bond character from the film or from past movies (including Scaramanga, May Day, Jaws, Odd Job, and many more). The game was a huge success, one of the most successful videogames of all time, and it’s popularity carried over to the movie and the world of James Bond as well.

In addition the new home video technology of DVD was evolving at the time. One of the best movies of that burgeoning technology was Goldeneye. It was used to demo the system, it was jam packed full of extras and it was great to showcase sound and picture quality. Suddenly Goldeneye was on screens all over the world showing off the wonders of DVD.

Those two elements combined with the host of spy movies that came out in the 90’s made 007 and espionage cool again. The 1990’s a real rebirth of James Bond and Goldeneye was the start of it.

Check out the review of Goldeneye.
Posted by Roman J. Martel at 7:39 PM