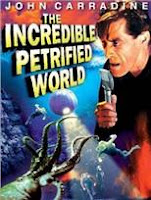 Introduction
Sometimes you know a movie’s not going to be good. I mean, I’m not expecting much from these 100 Sci-fi Classics. I just want some fun, simple and cheesy entertainment. They are usually pretty short and even if the movie is a little dull I’ll stick it out. But sometimes a movie comes along that just does absolutely nothing – nothing at all. The Incredible Petrified World may be just such a movie.

Summary
Professor Wyman (John Carradine) has perfected his diving bell technology. He is ready to test it in extremely deep waters. For reasons never explained, Wyman can’t go himself, so he hires a crew of four to test it for him. Craig (Robert Clarke) and Paul (Allen Windsor) are both scientists who helped work on the bell. Lauri Talbott (Sheila Noonan) is also related to the project. Dale Marshall (Phyllis Coates) is a plucky reporter with some anger management issues. The four a lowered into the depths, but when the cables snap they are sent hurtling into the abyss. Wyman blames himself but prepares another expedition to rescue the stranded folk. Meanwhile the four explorers escape the bell and find themselves in a strange series of underwater caverns with breathable air. But what secrets does this Incredible Petrified World hold?

Good Points
Bad Points
Overall
This is a painful film. It’s not bad enough to be funny. It doesn’t do enough with its barely interesting premise to make anything fun. It just lays there like a cold dead fish. And I dare say that watching it could turn you into the Incredible Petrified Audience.

In Depth Review
This movie is a real toughie. It’s gotta be one of the most dull and brainless exercises in film making I’ve seen in a while. And yes I’ve seen some doozies. What really makes this one tough to even review is the fact that I felt nothing but apathy for it during the bulk of it’s running time. I barely cared enough to even review it. But hey, I felt it was a challenge, and I should take it up. Even if means trying to remember a movie that my brain was eager to forget.


You can tell from the scores that this movie is poor. It’s highest scores were for basic technical items and even those were below average. For visuals I give it a two because some of the stock footage (and there is a ton in this movie – Ed Wood would be proud) is interesting. Also the movie’s cave sequences were filmed in an actual series of caves in Arizona. Sure the director managed to make them look boring, but they didn’t look like sets and that’s a good thing. The sound follows the same boat. It’s functional, but at times bizarrely off. My favorite was what sounded like someone blowing bubble through a straw to mimic the sound of a boat churning through water. Wow.

The acting ranges from horrid to bland. John Carradine turns in the best performance, but even he looks bored. He is more interesting to watch than our two male leads who are of the 50’s block of wood variety. The women offer a bit more, since they are allowed to show emotions. Of the two Sheila Noonan is the more likable, but her character isn’t all that interesting to begin with. Then there’s the patented Crazy Old Man with Bad Fake Beard. Maurice Bernard gives some life to the character, but honestly this movie needed more scenery chewing and that would be the perfect place for it. Bernard only nibbles gently at the scenery.

The rest of the film is pretty much a failure on a grand scale. The idea of ocean exploring and finding a hidden world with oxygen could lead to some fun if silly adventures. But the budget must have been blown on the Arizona caves, because nothing of real interest happens. Lots of walking scenes. A few scenes of tension (or yawn filled) in fighting. The crazy old man appears and you get some hope that there might be some fun to be had. But it’s all in vain. The most action we get is a volcanic eruption that causes fake boulders to come crashing down and stock footage of what look like mud slides to occur.

The movie’s construction is what baffles me. As I mentioned after a credits sequence with some promising storm footage and full throated music, we dive right into a series of oceanic stock footage and with narration. It goes on for what feels like forever, telling us things we don’t know or care about. I was reminded of The Mole People where a scientist goes on and on about Hollow Earth Theory as if trying to justify the goofy movie you’re about to watch. In both cases this does nothing but start your ADVENTURE movie with a dull speech. Really bad move.

Then you’ve got the dull office scenes and John Carradine on a boat talking to dull people. This is all intercut with the actual ADVENTURE part of the story. So instead of creating excitement or tension in those exploring scenes, they are actually made duller by jumping to these dull talky scenes of men talking really bad pseudo-science. Some of the dialogue is funny, check out Carradine’s reasoning for why the diving bell failed in the first place. But most of it is lifeless and limp.

Structuring an ADVENTURE movie this way is contrary to anything that makes an ADVENTURE movie fun. Why am I shouting the word ADVENTURE? Because the stupid screenwriter and director obviously forgot what kind of movie they was attempting. Now I’m sure Jerry Warren had a small budget. I’m sure he was just trying to make a drive-in cheapie for 1957. But if you’re gonna make this kind of movie, you’ve got inject something of interest into it. And I’m sorry but Mr. Warren (who made the equally abysmal Wild World of Batwoman) made a movie that just lays there. Even Mystery Science Theater 3000 would be extremely hard pressed to turn this dull flick into an amusing episode.

And while the film didn’t actively hurt me, I’m sure that if you ask me about it next week, I won’t remember a thing. This is only worth one petrified star.
Posted by Roman J. Martel at 9:58 AM