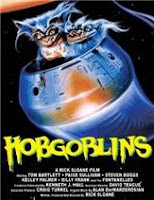 Kevin (Tom Bartlett) is hired as a security guard at an old movie studio. While attempting to help out his mentor Mr. McCreedy (Jeffrey Culver), he manages to release the hobgoblins. These little critters have been locked in the studio vault for decades by McCreedy after they caused some major havoc the last time they were free. You see, the hobgoblins have the power to create illusions of a persons greatest fantasy – and then kill them. Now it’s up to Kevin and his team of friends to find and capture the Hobgoblins before it’s too late.

At some point while watching “Hobgoblins” you have to ask yourself a question. Why? This question can be applied to just about any part of the production, and I’m sure the answer would be interesting.

Why combine the plots to “Gremins” with the plot of a teen sex comedy? Why does Kyle (Steven Boggs) wear little pink shorts? Why the battle between Kevin and Nick (Billy Frank) using a hoe and a rake? Why do the Hobgoblins grant fantasies and then kill? If Mr. McCreedy knew how to kill the Hobgoblins, why didn’t he? Why the song “Fish Licker”, oh I’m sorry, “Kiss Kicker”? And how did Roadrash (Duane Whitaker) get his moniker?

I love 80’s films. There is always something nostalgic about watching them for me – even the bad ones. And this is a bad movie, make no mistake. Its supposed to be a horror/comedy, but it’s neither scary nor funny (on purpose). Most of the jokes are painfully obvious or just lame. The horror is supposed to generated from some sharp toothed puppets – but the little Hobgoblins barely move at all. They wobble more than anything else.

The acting is poor for the most part. If anything it is the actors who jump into the exaggerated nature of the movie that make it at least a little fun. Most of the best scenes occur at Club Scum, arguably the climax of the film. It’s just packed full of bizarre characters like the bouncer Roadrash, the MC (Daran Norris) and the tall haired Pixie (Kari French). Combined with the fantasy sequences, Amy (Paige Sullivan) and her decent into debauchery, and explosions you’ve got an extravaganza of 80’s cheese.

Honestly this movie can cause those with low tolerance to anything 80’s to break out in a road rash. If comedies that are terribly unfunny horrify you, then avoid this film. But if you’re looking for a movie with all the needed ingredients to make a classic episode of Mystery Science Theater 3000… look no further.

One of the writers of MST3K said something close to the following – “It seems that the movies that hurt us the most are the ones that people love the best.” I have to agree. A truly bad film with all the right ingredients can make a top notch episode even if the writing staff suffered because they had to watch the movie multiple times. By all accounts, “Hobgoblins” caused some major suffering.

This causes Pearl to be filled with rage, and unleash the worst film she knows – “Hobgoblins”. Bobo screams in terror! Brain Guy is profoundly disturbed. Bobo screams again. The look on Mike and the Bots face is one of true fear. The movie starts and as the credits roll – the bots try to make a break for it, unable to come up with any funny riffs because they are so scared.

It’s a funny sequence and one that makes the viewer wonder, just how bad is this movie? It’s bad, but honestly I’ve seen worse ones. But rarely has a perfect storm set itself up so well for riffing.

Everything seems custom tailored to provide laughs that are unintentional and just feed into the riffing machine. You’ve got the bad dialogue – especially the sex comedy stuff that is just bizarre beyond belief. My favorite is the phone sex sequence with Kyle and Fantazia (Tamara Clatterbuck). The combination of lines and acting is just made for mockery.

The rest of the host segments feed off the film and those are usually my favorite kind. Crow is inspired the treatment of women in the movie to make a short film about women. This is one of my favorite Crow moments from Sci-fi years. Up next, Crow sets up a crisis hotline for people who watched “Hobgoblins” – and Bobo calls in for some help. The movie proves too much for Mike and bots and they create cardboard doubles to trick Pearl so they can escape. This leads into a sequence in the theater during the end credits where Tom creates a cardboard cut out of director Rick Sloane and “interviews” him (Crow provides the voice for Mr. Sloane). The last segment has Tom travel back in time to deal with Sloane – Terminator style – so that “Hobgoblins” will never be made.

For me, this is a real highlight of Season 9 and the entire Sci-fi run of Mystery Science Theater 3000. You’ve got a super-cheesy 80’s flick, top notch riffing and some really funny host segments. I give this episode five Hobgoblins (or pink shorts) out of five.

This episode is available in The Mystery Science Theater 3000 Collection Vol. 8
MST3K Introduction can be found here.
Posted by Roman J. Martel at 6:42 PM