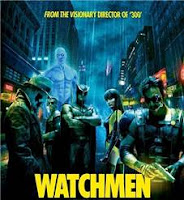 I wonder how many people out there assumed that “Watchmen” was going to be just another comic book turned into a movie? I wonder how many of them were disappointed in the result? I can only imagine what it would be like: going to see this movie and expecting something like “X-men” or “The Fantastic Four”. Turns out that “Watchmen” is more like “The Dark Knight” – but with a slight twist. Turns out, “The Dark Knight” is more like “Watchmen”.

In the year 1985, the masked hero The Comedian (Jeffrey Dean Morgan) is murdered, it seems to trigger a series of grim events. Rorschach (Jackie Earle Haley) is convinced that there is a killer who is targeting masked heroes and super heroes. He tries to alert the remaining heroes to the danger, but is written of as paranoid (and a little crazy). Then Dr. Manhattan (Billy Crudup) leaves the earth, and more importantly the United States for Mars. The Russians have been waiting for this, and begin to make moves toward a world war. When Rorschach is arrested and an attempt on the life of Ozymandias (Matthew Goode) fails, the remaining two heroes Night Owl (Patrick Wilson) and Silk Specter (Malin Akerman) decide to unravel the mystery. But with nuclear holocaust imminent, and the world is on the brink, does it make any difference if The Watchmen live or die?

Any adaption of “The Watchmen” was going to be difficult, but I have to admit, this is probably as good a movie as we will get from it. The script could have used some streamlining and manipulation so that the exposition and themes flowed more naturally for a film. The movie is long and it feels long. However anyone who is willing to think during and after their superhero film will find a lot to digest here. On top of that the technical merits of the film are of a high caliber. If this sounds like your kinda movie – give it a try.

The first thing I said after reading “The Watchmen” was, “How did they make this into a workable movie?” The answer is that the director Zack Snyder took a lot of risks. For the most part his daring works well. The movie is about as good as I hoped it would be. Not a perfect film by any means, but given the depth of the material and the density of its background information – the movie version of “The Watchmen” could have turned out a lot worse.

Zack Snyder has done an amazing bit of technical wizardry here. His previous work on “300” was equally impressive. That movie had a particular look and feel that meshed will with the over the top nature of source material. It showed me that Snyder has a great sense of how to make comic book visuals work on the big screen. In “The Watchmen” he does an even better job with a lot more color and depth to the images than what he did in “300”. Again it goes to the source material. “The Watchmen” has a lot of darkness to it, but the colors pop off the page when they are featured. Snyder does the same thing here. Blood stands out against stone. The yellow smiley face of The Comedian becomes a symbol of sorts and it is clearly visible in all the scenes it is featured. The brilliant blue flesh of Dr. Manhattan as well as his signature energy shimmer are presented perfectly, often overpowering the colors around them. In many ways this film reminded me of the visual delights of Speed Racer. But instead of bringing a 60’s cartoon to life – Snyder brings an 80’s comic book alive.

If there is anything negative to say it’s that this style straddles the line of being impressive and oozing into flashy and silly. This occurs in most of the fight scenes where the extra layer of slow motion and amazing acrobatics goes from cool to funny. Yes, I was laughing during the fight scenes. I had the same reaction to the battle scenes in “300”. Again, compared to “Speed Racer” where the fight scenes were supposed to be funny, and executed in a similar fashion – I think Snyder would have been better off having the action play out in real time with a realistic brutality. It would add to the themes of the film and kept things from going just that extra bar over the top.

Sound effects are excellent in the film with lots of interesting elements being brought into play. Whenever Dr. Manhattan is on the screen, there is a dull throb of power always droning, as if reminding us of his unnatural presence. All the super heroes have gadgets or special moves that are perfect for a sound designer to amplify. In addition the visual style of the movie cries out for a sonic style to match. It is top notch work here, one that allows us to buy into the world we are seeing.

The music is a tricky beast. The score is functional, providing elements when needed, but never giving us an identity or theme to marry to the image. Compared to the excellent score by Danny Elfman for the first “Batman” film or if you want a more recent example Elfman’s work on the “Spider-Man” series, the score is nondescript. This actually allows the song choices to stand out even more. We get some great selections here, stuff that would make Tarantino proud. Many of these songs were quoted or used in the graphic novel and so it adds to the authenticity. The first few minutes of the film the use of Nat King Cole crooning “Unforgettable” followed by a powerhouse of opening credits to Dylan’s “Times, They are a Changin” is a excellent example of the work here. Irony abounds, and again, it might cross the line for some viewers, but I found it all very much in keeping with the film and its themes. I do find it odd that the music comes mostly from the 60’s and 70’s, even though the film is firmly set in the middle of the 80’s.

The acting is uniformly good across the board. All the main heroes do a very good job bringing their characters to life. The graphic novel went to great lengths to give depth to all these characters, so the actors had plenty to work with. Nearly all of them nail the parts and make these people believable. I have to give special mention to Jackie Earle Haley as Rorschach. Granted the character is the most flashy and interesting of all the Watchmen, but Haley inhabits the character perfectly. His scenes in prison are perfectly executed and add to the mystique of the character. But again, I thought all the actors did a great job with some complex characters.

Adapting this graphic novel must have been a real task. You’ve got to make a decision early on. Do you adapt this to make it palatable for the general audience? Do you make it for fans of “Watchmen”? Do you try to do both. In the end I think that this movie was made for fans of “The Watchmen” graphic novel. So much of the material is kept nearly intact that it’s amazing. But it quickly becomes apparent that what worked better on the page does not translate onto the screen without some pruning or modification. When push comes to shove, some changes were made. Much of the exposition for Ozymandias is placed in a long monologue. But we aren’t given the benefits of the flashbacks we get for the other characters. The other major change is the ending. The climax of the graphic novel worked good enough on the page, but even while I was reading it I couldn’t think of any way it could work cinematically and not look ridiculous. The compromise is surprisingly efficient and completely fits the plot and themes. I could even argue that it works even better then the original ending – but I don’t want to incur the wrath of the dedicated fans.

For the most part Snyder keeps all the balls in the air and does it for most of the film. The main problems I have with the film are based on the graphic novel. Snyder’s decision to keep as close to the source as possible ends up making the movie clunky in places. It does not flow smoothly and as such it ends up dragging at times. Snyder does as much as he can to keep things visually interesting during these dull spots, but there is only so much he can do. A movie requires attention to pacing and story flow, and Snyder is limited by trying to keep the pace and flow of a literary work. That and his over the top action sequences are really the only missteps. I think for some viewers it might be enough to keep them from appreciating the film. But if you look at all the things he does right, it’s actually very impressive. I think someone with knowledge of the graphic novel will appreciate the final product the most.

I enjoyed the movie, but as I mentioned, I felt it was too long. The narrative could easily been spread into two films. But just making one “Watchmen” film was going to be a gamble. I don’t’ think making two films was an option. The only way to keep close to the source was to make a long film. But long films shouldn’t feel long. In addition the graphic novel’s anti-climax is kept (if altered slightly). I appreciate what it does for the themes of the story. But it does not make the film satisfying after it’s over. It’s slightly more acceptable in the graphic novel, because of the depth of the world created. In the movie, that depth is reduced and because films are much more immediate as a medium, we want closure. “Watchmen” doesn’t provide that closure, it presents it’s case and then leaves you wanting more. This can work, but it doesn’t click for me in this case. Still I was able to appreciate the film as a whole and wouldn’t mind revisiting it again. It’s a bold experiment, one that almost works. I can recommend it to anyone who’s read the graphic novel and anyone looking for some interesting visual and auditory experiences. Others might want to pick up the graphic novel first, and then decide if they want to check this out.