The film opens with a pre credit sequence with Sheeta in an airship, obviously being escorted against her will by the urbane Muska. The airship comes under attack by Dola and her pirates. Musk and his men attempt to defend their position, but will the battle rages Sheeta escapes by climbing out the window of the airship. Muska's men try to stop her but instead she panics and falls plummeting into the clouds below and fainting along the way. Then the credits begin... 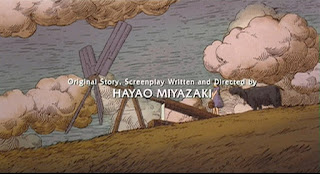 The credits end showing Sheeta in her homeland before she is abducted by Muska (although we don't know that yet). What is great about the rest of this sequence is that it gives us a little taste of everything Castle in the Sky is about in the first few minutes. 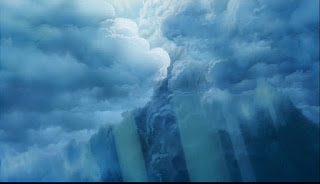 We get this gorgeous shot of the night clouds and something falling between them bathed in moonlight. 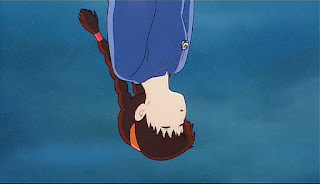 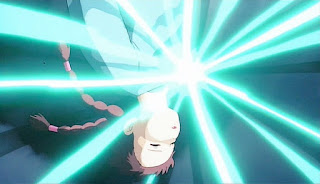 Then her amulet explodes with a brilliant and mysterious light, brighter and more powerful than the moonlight. 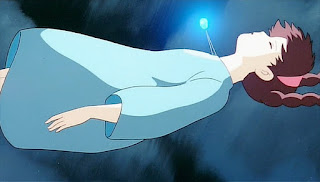 The mysterious power slows her decent and causes her to float slowly in a prone position. 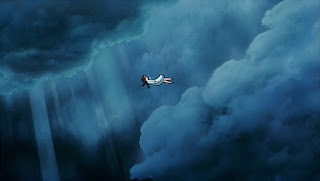 We see her small form contrasted to the huge clouds. 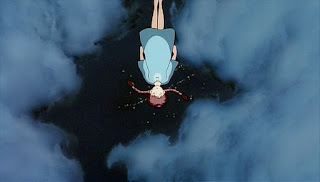 The angle switches again and we see her floating toward lights on the ground, a village of some kind. 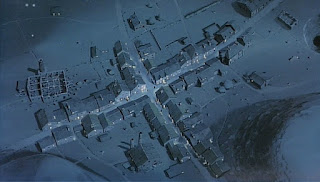 The sequence then moves to introduce our other protagonist. We get a better view of Pazu's village. 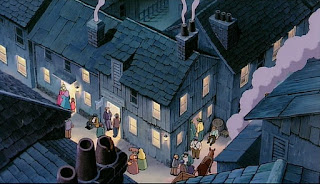 We see that even at night the village is bustling with activity. It also enforces the setting beyond the airships we saw in the pre credit sequence. This time feels 1800s. 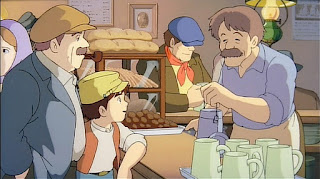 Suddenly we are inside one of the shops and bathed in warm light and warm colors (in sharp contrast to the cool blues and greys we saw as Sheeta fell).  Sheets was isolated and alone, but Pazu is part of a community. 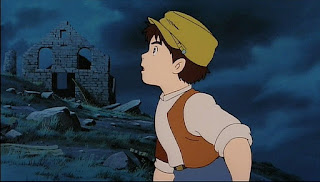 Pazu is heading to work when he sees the glimmer of a falling star, but no, it is too bright to be a shooting star and it is floating so slowly. 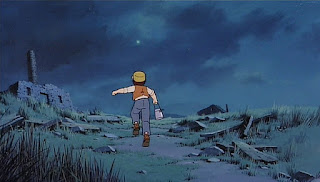 Pazu realizes he can maybe catch the falling object if he runs, so he chases after this falling star. Notice how Pazu has left the warmth of his community and entered the cool darkness to meet Sheeta. 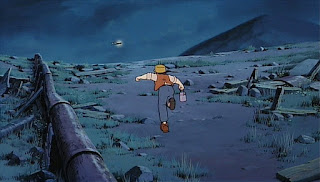 As he gets closer he realizes that this is not a star, but a person. He hurries even faster over the ruined landscape. 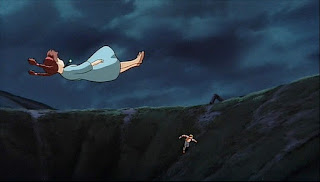 Sheeta is falling into an enormous crevasse. Pazu races around the edge of this dark pit. At first you wonder if he is on some kind of battle field. The ruins and pits seem to indicate that. 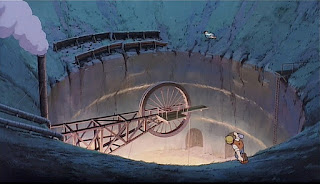 But the camera switches and we see that this is a huge mine! More of the industrial technology is visible and adds another layer to the setting. But the ruins we saw a few seconds ago hint at some kind of war or battle, and we learn later in the film that Goliath and the military rule this land with an iron grip. 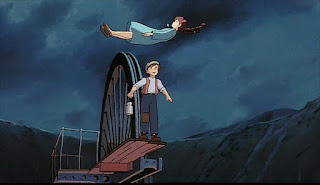 Pazu is able to reach Sheeta as she floats down near a plank extending from a giant gear. 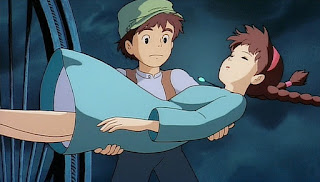 Pazu catches her floating form and seems a bit uncertain about what to do with this sleeping cute girl that just fell from the sky. 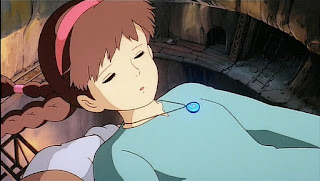 We see Sheeta as he does. Is she some kind of angel and why is her amulet glowing? She's so light! 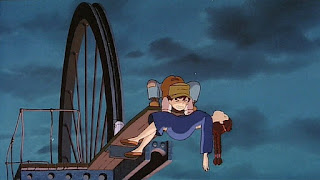 And then the amulet stops glowing and Sheeta's full weight is revealed. We get this humorous moment where Pazu struggles to keep from tumbling into the mine. A bit of cartoon physics is employed to keep our heroes from plummeting. 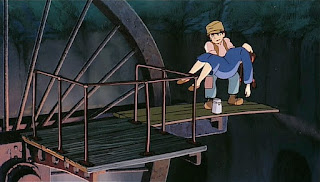 Pazu manages to retain his balance and place Sheeta in a safer platform. He even puts his vest over her inert form to keep her warm. 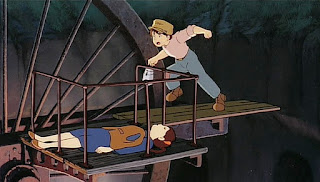 He then rushes off into the mine to help his boss work the steam powered elevator.

This scene is a great examination in how to tell a little about your characters, introduce more of the world they inhabit and getting the mystery and adventure all started. The amazing thing is that there is very little speaking in this scene. Pazu wonders a few things to himself (and in the English dub he monologues quite a bit), but the mystery and wonder of this scene are really carried by Joe Hisaishi's score (I shared the music for this scene in my Anime Juke Box for Castle in the Sky.

A scene like this seems so simple and easy, but we don't see too many movies (live action or animated) rely on such clear and yet descriptive visual storytelling. Miyazaki really knows how to get a movie started.

The ads aren't as visually impressive as this film, but click one any way.
Posted by Roman J. Martel at 6:00 AM