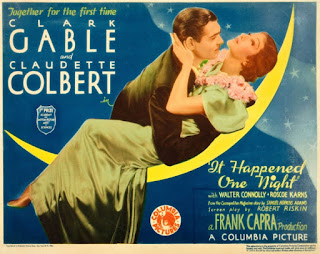 So my wife found a Blu-ray edition of It Happened One Night by Criterion Collection for a great price at Costco (of all places). We had the DVD release for quite a few years, but figured we could replace it with Criterion's clean up copy.

So yeah, this print looks great, but what surprised me was the sound. Holy crap did that audio sound as crisp and natural, as if the film were just made yesterday instead of 1934. I shouldn't be too surprised, Criterion always does a fine job with restoration. But before this turns into a full fledged commercial for the Criterion Collection (too late), I had this odd epiphany while watching the movie.

I wrote earlier this year about how much Ex Machina reminded me of Ghost in the Shell. I have an upcoming post about the similarities between Dune and Nausicaa of the Valley of the Wind. So I must have movie comparisons on my mind. But It Happened One Night was something different. It reminded me of a ton of different movies while watching it. But the reason for that is because It Happened One Night pretty much refined the romantic comedy genre into a a crystallized perfect specimen... in 1934! Nearly all mainstream romantic comedies that followed have borrowed in some way from this classic film. Some have modified and improved elements. Most just copied and pasted the sequences and moments wholesale into their films.

This isn't necessarily a bad thing, It Happened One Night is a very entertaining film. It has some great dialogue, two excellent performances, and moves a great pace. Frank Capra does a fine job putting the whole thing together, and working with the chemistry between Clark Gable and Claudette Colbert. Sure every time this film is mentioned all you see is the infamous hitchhiking scene. But this scene works even better in the context of the film because of the adventures and interaction building up to it. This movie may be considered the great grandfather of romantic comedies, but it works so well: you laugh and you swoon. What more do you want in this type of film.

We are actually getting away from the influence of It Happened One Night in this modern era of movies. Fellow writer Richard Bellush at Richard's Pretension has pointed out that many modern "romance" films view romance through a cynical lens. Characters who fall in romantic love are mocked and considered the oddballs. The comedy stems from how bizarre these characters are. After years of Hollywood basing their films off of It Happened One Night, it is a pretty refreshing.

That said, I'm a softy at heart (check out my review of Oh My Goddess if you don't believe me). So something like It Happened One Night or When Harry Met Sally still work great for me.

What is interesting is that even though It Happened One Night feels overly familiar, through no fault of its own, I still enjoy it. But on a revisit of North by Northwest, I found it really hard to get over the fact that I knew every plot twist and sequence because so many movies have borrowed (and yes lets just say it, ripped off) the 1959 classic thriller. I wonder if it has something to do with the genres. With a thriller you are there to enjoy the twists and the build up of tension. With those things neutralized the movie is less entertaining. I enjoyed North by Northwest, but not as much as I enjoyed rematching Rear Window. Might have to take a closer look at why in a future blog post.

But for It Happened One Night, I am there to watch the interaction between Gable and Colbert. I'm there to see those characters work their way out of those situations. And I'm there for fun ride. All those things hold up well, and make it a true classic, not just of the genre, but in the space of all film history.

Have you ever watched an older film that inspired a whole slew of imitations? Did that impact your reaction to the original?

Did this post make you think? Get your revenge and click and ad before you go.
Posted by Roman J. Martel at 6:00 AM