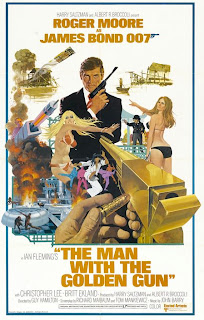 Introduction:
When it comes to the James Bond series, everyone has their favorites, and their least favorites. Some folks will champion some of the lesser loved films. Other madmen will call Goldfinger a merely average film. But there are a few James Bond films that most folks can agree on. The Man with the Golden Gun is one of those. But do they consider it a winner or a stinky dog best left alone.


Summary:
British secret service agent James Bond (Roger Moore) discovers that he is on the hit list of the most dangerous assassin in the world. The killer is named Scaramanga (Christopher Lee). He charges 1 million dollars for each job and always does it with a golden bullet, shot from a golden gun. He’s never failed an assignment, and the gold bullet with 007 etched in it means Bond is next.

This is a bit of a problem since Bond is attempting to track down a solar cell that may solve the world’s energy problems. M (Bernard Lee) takes Bond off the case, and lets him go on leave. Bond takes the opportunity to track down Scaramanga. The journey takes him to Beirut, Hong Kong and Bangkok.  Along the way he teams up with Goodnight (Britt Ekland) a klutzy but cute civil servant, and Hong Kong agent Hip (Soon-Tek Oh). But he must also face Nick Nack (Herve Villechaize) Scaramanga’s height challenged henchman, and figure out what side Andrea (Maud Adams) will play for. It all comes down to a face off between James and The Man with the Golden Gun. Winner take all.


Overall:
What kills me about this movie is that you’ve got all the ingredients for one of the best James Bond adventures ever. Lee makes a perfect foil and dark mirror for James Bond. When he’s driving the story, the movie works at it’s best. But the humor is handled very poorly, the tone tries to juggle edgy and super silly from scene to scene. It doesn’t know what to do with Goodnight. The pacing meanders, never creating any urgency. This is certainly one of the weaker entries in the series, but not quite the worst.

While Live and Let Die wasn’t a triumph, it did achieve what it set out to do, put Roger Moore firmly in the role of James Bond. He seemed a natural fit and for the most part, when that movie was working, it was because of Moore’s easy charm and skill in the role. I can imagine that he was pretty hopeful about the follow up film; especially when he found out he would play opposite one of the best actors to play a villain in the 1970s, Christopher Lee. How could this not work?

It all comes down to the script and lack of concept behind The Man with the Golden Gun. Everyone knew that Roger Moore could handle comedy. Everyone felt that folks wanted to see a less serious Bond film, and have more fun at the movies. But the problem is, no one really figured out how to best utilize Moore, and focus the script. The result is a film with split personality. One moment it tries to get edgy and dark. The next we have James Bond in mortal peril because of a woman’s butt. I’m not kidding.

But the film isn’t a complete waste of time, and the first reason is the wonderful location shooting. You’ve got some great sequences in Macao, Hong Kong and Bangkok. Everything from the inside of casinos, to lovely views of Kowloon Bay and surrounding city are a sight to behold. The chase scene in Bangkok provides plenty of visual eye candy. But the most amazing location is in Phuket in Thailand. The islands of Phuket create some of the most memorable visuals in the James Bond series. The way the rocks stretch up like pillars is amazing. It seems the perfect spot for the finale of The Man with the Golden Gun.

Less impressive are the sets used in the film. Ken Adam was not brought on for this film and the production design was also limited by the budget. The result was some really unimpressive sets that just don’t measure up to the larger scope of the James Bond films. But really, that type of set wasn’t needed in this film. Because the script inserted the whole solar cell MacGuffin, it probably felt like they needed to have an exploding lair sequence. All it did was end up making the film look cheap, something no other James Bond film ever suffered from, even Dr. No.

The sound work is up to scratch. Nothing stands out, but the gunshots, squealing tires and fisticuffs sounds all work well. For the musical score, composer John Barry was brought back. He brings his lyrical sense with him, and creates a James Bond score that was less funky than Live and Let Die, but more in line with the sound he created in You Only Live Twice. The tune for the song The Man with the Golden Gun is used quite a few times and handled well in the score. He adds a bit of Asian flair, but keeps it on the lighter side, arguably tongue in cheek. His action music is still pretty fun, and helps move those scenes along. It’s not a great Bond score, but it’s solid work by Barry.

As for the song itself, well it’s really a doozy. Lulu sings it with a sassy brassy style. But the lyrics are so ridiculous you can’t help but laugh. I mean, they are eye-rollingly bad. You’d think they came from a James Bond parody. At the same time there isn’t much they could do with that title. I find it to be a song that is so bad, I get a kick out of it each time it comes on.

This brings us to the acting in The Man with the Golden Gun. Well, part of the problem here is that the script is so bad, I can’t blame the actors for not being able to pull some of this off. Let’s start with the good, Christopher Lee makes a great James Bond villain. He’s cold, calculating, urbane and intelligent (for the most part). His scenes are always the best of the film, and his interaction with Moore makes for some of the best moments of the Moore era. Villechaize makes for a good henchman. His small size makes for a deceptive villain. He’s got a sadistic streak in him, and there is an added playfulness that makes it work. The script does end up failing the two characters. Scaramanga does some really stupid things near the end of the film, and they seem out of line for the character. Nick Nack is played for laughs a few too many times, and it cheapens the character in the end.

The two ladies fare little better. Adams is sultry as Andrea, but her part is under written. I’m not sure if the writers knew what to do with her, other than make her into a plot point. What we get isn’t bad, but I always wish they did more with her, either make her a co-villain, or work her into the story better. Ekland looks great in a bikini. She plays ditzy fairly well. But Goodnight is pretty much around for eye candy and laughs. It’s a thankless role really, and Ekland does what she can, but frankly her character annoys me. She ends up getting into numerous scrapes, and is only around for Bond to rescue or kiss.

This leaves us with Moore. Roger had it rough in this one. One minute he has to be a cold brutal agent, the next he’s in a silly karate battle that’s setting up one lame joke after the other. Then he’s got some horrible scenes with J. W. Pepper (Clifton James), and then gets his great scenes with Lee. James Bond is not clearly defined in this film. Even in Live and Let Die he seemed clearer in concept then in The Man with the Golden Gun. The result is Moore’s most uneven performance. He doesn’t quite nail the darker scenes when he interrogates Andrea. The humor doesn’t play to his strengths, and so scenes where he chastises Goodnight come off badly. Moore is capable of both side of Bond. His anger in For Your Eyes Only is played perfectly. He is able to keep the parody mode of Moonraker fun. But in this film, he is scuttled time and again by the script.

Guy Hamilton is once again at the helm here, and like his work on Live and Let Die and Diamonds are Forever, there are some serious pacing issues. The movie just meanders around, never getting any urgency or momentum. Tension is kept to a minimum, with only the Scaramanga scenes providing any kind of thrills. But I think most of that comes from Lee's sheer force of will. Hamilton does provide some good framing for the location shooting. But he doesn’t handle the action scenes very well. The chase scene is lifeless. The amazing stunt involving a 360 roll in mid air is the highlight. But a stupid slide whistle effect turns it into a joke. Other moments, like the whole karate school segment feel like a bad joke poorly executed.


Once again Hamilton directs a script that is set pieces in search of a story. The Man with the Golden Gun is the most interesting of the three Hamilton films from the 1970s. It has some very good moments, but the typical problems of pacing and poorly executed humor injure this one. Hamilton was picked because of his work on Goldfinger and the resulting popularity of that film. But when looking at the four Bond films he directed, they are overwhelmingly some of the weakest of the bunch.  The flailing of the script and direction here seriously derail what could have been a classic Bond film. It would take The Spy Who Loved Me to really get the right tone for the Roger Moore era. Looking at the behind the scenes issues during The Man with the Golden Gun I’m willing to give it a little bit of a break. The two main producers of the series were in the middle of a falling out. But it doesn’t make it an average film. It’s better than the two movies that preceded it, but not by much.