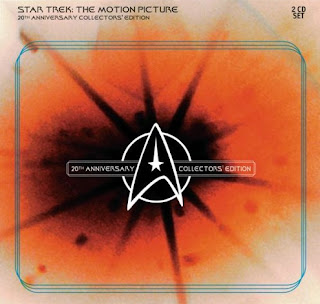 I’ve been pondering writing about the score to Star Trek: The Motion Picture for a while. But I’ve always struggled with the best way to approach it. I could write many, many pages dissecting each track and babbling about how great it is. The thing is, my musical vocabulary is limited. Dammit, I’m a film music fan, not an expert.

But I’ve listened to a lot of film music, and so I can compare the work to other film scores for similar films, or to scores for movies made during the same era, or even made by the same composer. But still, unless you’re really into the world of film music, that kind of thing isn’t that interesting.

Then I figured it out. I’ve said on a number of occasions that the score to Star Trek: The Motion Picture is one of my favorite film scores and the score that I consider to be one of Jerry Goldsmith’s masterpieces of the art. Granted I haven’t heard everything Goldsmith has ever composed, so my judgment may be subject to change. However, at this point, as amazing as Goldsmith was – I haven’t heard a score that topped this one.

So here are the five reasons I love the music to Star Trek: The Motion Picture.

When it comes to a legacy of great themes Jerry Goldsmith is certainly one of the masters. But perhaps the one theme that will live long and prosper will be his main theme from Star Trek: The Motion Picture. The irony is, the film itself wasn’t the reason the theme is ensured its place in the cannon of great science fiction themes. Roddenberry loved the theme so much, he insisted that it become the main titles for Star Trek: The Next Generation.  But if you haven’t heard the theme played by a full orchestra (not the smaller one used for the television version) then you are missing out. The versions performed in the “Main Title” and “End Title” of Star Trek: The Motion Picture present the theme as it should be performed, with a massive orchestra bringing the real power to the music.

Goldsmith created several themes for the film. There is a love theme for Lt. Ilia. There’s a motif for V’ger, as well as more mysterious theme for the unknown. There’s a rhythmic motif for Starfleet. There’s even a great theme for the Klingons, that is only used in the beginning of the film, but went on to appear in later films and television episodes for the alien race.

Goldsmith gives all the themes times to shine, and opportunities to change pacing, dynamics and structure. Sometimes they melt together, such as when Ilia’s theme and V’ger’s motif become intertwined after the halfway point of the film. Other times they run in counterpoint to each other creating a musical conflict that’s a joy to listen to. I wouldn’t go so far to say this is Goldsmith’s most thematic score. But the way he uses the themes and the power of those themes is what makes Star Trek: The Motion Picture really stand out in his filmography. 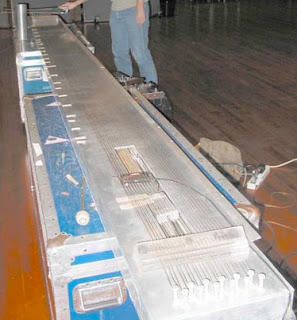 Perhaps the most unique element of this soundtrack is the electronic instrument known as The Blaster Beam. It literally is a metal beam strung with numerous wires and mounted to electric guitar pickups. The sound is altered by modifying the pickups, striking the wires with different surfaces and striking at different points. Craig Huxley created a refined version of the instrument that ended up being used in many science fiction and fantasy films of the late 70s and early 80s.

Of all the scores that used the Blaster Beam, Star Trek: The Motion Picture highlighted it exclusively. Part of this was the style that Jerry Goldsmith used electronics in his scores. For Goldsmith, electronics were only used to create sounds he couldn’t get out of an orchestra. So in many of his scores, the electronics stand out, because they are meant to. Rarely did he blend them into the orchestra, or use them to support. They were often presented in opposition or in solo formats.

The Blaster Beam is an inspired choice for the film, because Goldsmith uses it as the voice of V’ger. It is electronic, powerful and very alien. When presented with the lush orchestra that often accompanies our heroes, it stands out, constantly at war with the characters. Eventually the sounds are fused together, and woven with themes. The track “The Meld” fuses the orchestral power with the Blaster Beam and creates an impressive balance that matches the finale scene. The final result is a film score that has been referred to as a symphony for orchestra and Blaster Beam.

One of my favorite moments in film music is the first ten minutes of the score to Star Trek: The Motion Picture. These ten minutes present a nearly all the themes and motifs we will hear in the score. Each is given plenty of time to shine. Each track builds to the next until we hit a finale that presents V’ger as a definite threat.

Things start off with an “Overture”. This is one of the last Hollywood films to actually start the film with a musical piece over a still frame or dark screen. In this case, Goldsmith selected Ilia’s theme to open the film. It’s a lovely piece and it flows along gracefully. Then the “Main Title” explodes onto the screen with a triumphant adventurous sound. The theme charges ahead until it ends … with a strong note on the Blaster Beam over a shot of V’ger cloud.

The next sequence involves the Klingons investigating and then attacking the mysterious cloud. Goldsmith’s brilliant Klingon theme, militaristic and alien, starts out measured and proud. But as the battle starts going poorly, the tension increases. The Blaster Beam assaults the Klingon theme, and causes it to increase in tempo and distress. A couple of brief shots of a Federation space station monitoring the battle introduce us to the Starfleet motif as well as additional electronics. When the battle concludes, the Klingon theme deconstructs in the face of the Blaster Beam. The Federation space station determines the cloud’s course for Earth and the piece ends with another ominous strike of the Beam.

These first ten minutes do something really impressive. They set up a mood and atmosphere: first one of beauty, then one of adventure and then present a sequence that plays out like musical storytelling (I’ll get to that in a minute). When I first got this score on CD nearly ten years ago, I couldn’t just listen to the first track, or the first two tracks… but the entire 10 minutes. And I figured, hell I was this far in, might as well listen to the whole thing.

From a visual standpoint, the sequence where Kirk and Scotty arrive at the Enterprise is six minutes of watching two characters stand around and stare at a special effect. If you talk to people who dislike Star Trek: The Motion Picture, they’ll tell you that 90% of the film is watching other people stare at a special effect. And when you really break it down – yes six minutes is a hell of a long to have the story stop DEAD in its tracks. It would never happen these days, and after Star Wars presented such explosive action, the scene seemed way out of touch with what people wanted in a space opera film.

Here’s the thing. This scene is about more than two characters staring at special effects. It’s about a man return to the love of his life. It’s about him seeing the most beautiful thing he’s ever known, and lovely gazing at her, marveling in her beauty and her power. It’s a love scene between Kirk and the Enterprise. In the original series, Kirk was always willing to lay down his life to protect his ship and his crew. The Enterprise is a symbol for everything Kirk loves. And that is how Goldsmith scores this six minute scene.

Nearly every film score fan will tell you that their favorite track from Star Trek: The Motion Picture is “The Enterprise”. Goldsmith takes that bold adventurous theme from the “Main Titles” and turns it into something beautiful and romantic. It almost sounds like it could be a dance scene, or romantic walking sequence. It’s an amazing display of how to modify a theme to the immediate need of the film and it allowed the composer to reveal the emotions with almost no dialogue! The music concludes with a joyous and triumphant fanfare as the lovers are reunited. All told, it is one of the best tracks of Goldsmith’s career.

Goldsmith was given a huge gift with Star Trek: The Motion Picture. So much of the film revolves around visual storytelling, with minimal dialogue. While we can argue the merits of that approach, for a composer it is a dream come true. This gets back to the purest form of cinema where visuals and music tell the story. Listening to the score, you are taken on a journey.

With the massive 3 CD release of this score in 2012 by La La Land Records, the entire score was presented for the first time, and now all the elements that Goldsmith and his team used to tell the story are available to enjoy. The storytelling is so clear now. The music doesn’t just highlight the action but it creates and builds emotions and moods.

The use of the themes, the way the music is structured and the understanding of the ebb and flow of the story really turns this into a musical journey. Most modern film scores do not tie things so closely to the story. Many times they don’t have the opportunity, because of dialogue heavy scenes and loud sound effects. But Star Trek: The Motion Picture really was a showcase for the score. Scenes have greater impact because of the music, and the music as a stand-alone listen has an impact because it tells a story. In either the 3CD version or in the 1999 20th Anniversary Collectors Edition single CD, you get to experience a story filled with wonder, adventure, romance and triumph.

That is why I call this score Jerry Goldsmith’s masterpiece of film music.
Posted by Roman J. Martel at 7:13 AM