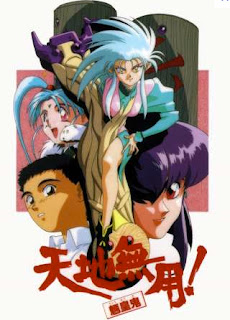 Introduction:
When it comes to huge names in Japanese animation in the 1990s, it is tougher to get bigger then Tenchi Masaki. This six episode series kicked off one of the biggest franchises of the time and inspired countless other shows. But just who the heck is Tenchi and why do we not need him?

Summary:
Teenager Tenchi Masaki (Matt Miller) was spending a quiet summer at the family shrine working with his grandfather Katsuhito (Jay Hopper). Intrigued by a legend about a cave near the shrine, Tenchi sneaks inside and starts exploring. He comes across a legendary sword and a sexy blue haired demon named Ryoko (Petrea Burchard). After chasing Tenchi around (and blowing up his school), Ryoko takes a shine to the young man. This is going to cause nothing but trouble.

You see Ryoko isn’t a demon at all, but a space pirate wanted in several star systems. Pursuing her is the princess Ayeka (Jennifer Darling) and her little sister Sasami (Sherry Lynn), as well as the intergalactic criminal Kagato (Michael Scott Ryan). Following Kagato is the bumbling Galaxy Police officer Mihoshi (Ellen Gerstell) ready to capture both lawbreakers. Throw in the mad scientist Washu (Kate T. Voigt) and a rabbit/cat hybrid that can turn into a spaceship (yeah you read that right) and you’ve got a space opera with plenty of action, laughs and cleavage to keep any anime fan happy.

Overall:
This is the series that started the whole Tenchi franchise rolling, and that means it is a little rough in places. Some of the animation in early episodes is a bit odd looking, some the storytelling is off kilter. Even some of the characters aren’t quite there yet. But episode three seals the deal. It’s light hearted, funny, has a little skin and hints at the space adventure in the next few episodes. The rest of the series keeps that mix and the result is a good time. 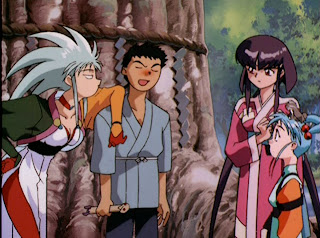 The title Tenchi Muyo can be translated a number of different ways, and since the Japanese love puns, it comes as no surprise that most of the translations fit the show in some way or other. It could mean “Heaven and Earth”, which fits Tenchi’s adventures on Earth and in space. It can be translated as “This End Up”, and was seen as a background gag in many anime from the AIC production company. Or it can mean “No need for Tenchi”. And honestly when most folks remember Tenchi Muyo it’s not because of the lead, but because of the girls.

Over six episodes Tenchi meets all the various women who will influence his life in future episodes of this particular series (and future franchise entries). The first episode put him together with Ryoko, who ends up being the party girl of the series. The second episode brings purple haired Princess Ayeka, the prim and proper love interest. It also introduces the incredibly cute Princess Sasami, who ends up being the most grounded of the girls, even if she is the youngest. The third episode presents us with Ryo-Oki, the cabbit/spaceship. Yes she’s mostly a mascot in the series, but the episode itself gives us more time with Ayeka, developing her character. Mihoshi arrives in episode four, and the villain Kagato is revealed at the same time. Episode five is where Kagato finally reveals his plot and abducts Ryoko. The final episode brings Tenchi facing down Kagato, and introduces us to Washu the scientist and “mother” of Ryoko.

So the overall plot dealing with the antagonist only gets rolling in episode 4, and that is the first problem viewers may have with this series. The first three episodes revolve around Tenchi meeting Ryoko and Ayeka, and getting into all kinds of comedic adventures with them. Sure there are chases and escapes, energy bolts flying around and even torture, but it’s all done with wink and a grin. If you come into Tenchi thinking that it will be a nonstop romp of space action and adventure, these first three episodes will come as a bit of surprise. 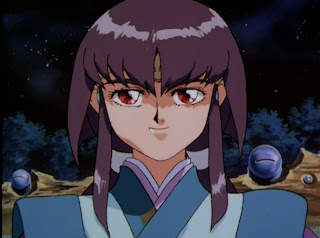 There is also plenty of humor mined from the conflict between Ayeka and Ryoko. They wouldn’t get along in the best of times, but the fact that they both fall for Tenchi just compounds the issues. As the series progresses, this relationship is warped around in all kinds of ways – even turning to a grudging respect at times. What is nice is that in this series, both women are fairly grounded, escaping some of the over the top shrillness that would make later incarnations of the series a chore to watch. 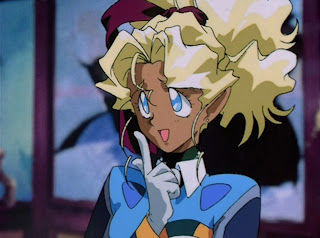 Then there’s Mihoshi, who is around for klutzy comedic relief. She’s involved in lots of physical comedy, as well as moments where she gets so flustered that she forgets a crucial instruction or action. Is it a coincidence that she's a blonde? While handled mostly for laughs, it also becomes a plot point now and again (and it worked really well into the finale for these six episodes). In later incarnations, Mihoshi would get dumber and dumber until she was basically a vegetable with breasts. Here, she’s still a likable character.

Tenchi’s father and grandfather are also around for laughs. The dad has a strange obsession with his son getting laid and tries to help out as much as he can. This character trait was dropped after this series, thankfully. The grandfather appears to be a tired old man, but is really a master warrior with a secret past. This past comes into play in the second half of this series, as well as plays into future installments. It was a unique twist that presents some interesting story opportunities. 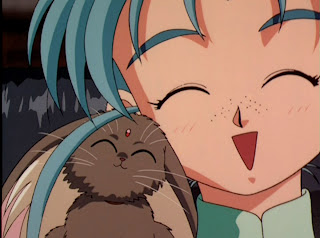 This balance of humor and space action is what really makes the series a fun ride. But visually there’s a lot of interesting stuff going on. The creators do some wonderful things with Ayeka’s ship and technology. They are all based on living trees, and her guardians are huge cylinders of wood. Trees and nature play a large role in the series and the royal family of the planet of Jurai. Contrast this to Ryo-Oki the furry little cat/rabbit that turns into a huge crystal powered starship. The fact that the mascot doubles as a death dealing craft is something you’d only find in anime (a similar thing happened in El Hazard where the cat could turn into “living armor”). Then there are more traditional starships like those used by the Galaxy Police and the behemoth used by Kagato, with its steel corridors and labyrinthine passageways.

There are also some well-animated action scenes, especially at the end when Ryoko leads the charge into Kagato’s ship. Lots of full motion combat and very little of the cost saving panning over still frames that anime can rely too heavily on. 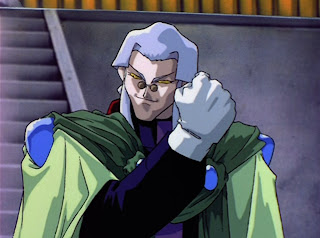 The English voice acting is a mixed bag. Back in the day it caused some controversy. The first three episodes are a little rough, with Miller and Burchard still getting a feeling for the characters. Darling however does an excellent job right out of the gate making Ayeka sound snobby and proper all at once. The entire cast gets better as the series goes along, and by the time they hit the second series of the OAV they will be right in the grove. However Darling, Burchard and Voigt have all been criticized for sounding too old for the young ladies they are playing. I can see that, but at the same time all three ladies make it work, and it actually ends up adding a bit of nuance to the characters. There are plenty of jokes about how old Ryoko really is and how she’s all over Tenchi. In English, the fact that Ayeka doesn’t sound much younger than the space pirate makes her comments about Ryoko’s age even funnier. Washu is short and is always trying to act like a little kid. With Voigt’s voice added to the visuals I end up laughing more than with the Japanese actress. This is all a matter of taste, but I really like the English cast, and the fact that Pioneer managed to keep nearly all of the cast for nearly all the English iterations of the franchise is a major feat.

The rest of the sound track works well enough. The musical score is typical of AIC's work, mostly synth material. The comedy music is typical stuff, and the heroic action music works well enough. The opening theme music is catchy, and the end J-pop song is cute. The sound effects are interesting because they seemed to be mined from the Skywalker sound archive, just like El Hazard. 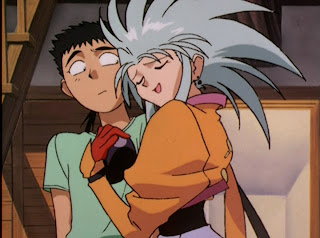 What is hard to appreciate now is that this series was released on video, episode by episode over a span from September 1992 to March of 1993. Each episode is about 30 minutes long. This was just the way it was done in Japan back in the day, and in North America we usually ended up with two episodes per tape, not much better. I’m not sure if that lag time made the whole series seem a bit more impressive or what, but Tenchi really appealed to anime fans on both sides of the ocean.

I think a big part of the appeal was viewers putting themselves in Tenchi’s place. Not only does he have hot alien gals fawning all over him, but he gets to use a powerful sword and energy weapon and save the world from a deadly foe. There is more than a little bit of Star Wars at play here (from the energy swords to the sound effects borrowed directly from the Lucasfilm library). But the whole thing never feels stale. Sure it is familiar, but there’s enough humor to keep things light and fun. This was followed by a one-shot episode, The Night Before the Festival and then by a second series of OAVs.
Posted by Roman J. Martel at 7:19 AM