After the power goes out, Grandpa (Ernest Borgnine) tells his grandson a couple of stories about Merlin (George Milan). Merlin traveled into the present day to open a shop of mystical wonders to share magic with the world. Unfortunately his first customer is a bitter columnist named Jonathan (John Terrence) who doesn't believe in magic. Merlin loans Jonathan his book of magic spells - with disastrous results.

Later a mysterious toy monkey is stolen from Merlin's shop. It ends up in the home of David Andrews (Bob Mendelsohn), as a birthday present for his son Michael (Struan Robertson). But every time the monkey clashes it's cymbals - something dies. Will the wizard be able to save the family and take the deadly toy back to Merlin's Shop of Mystical Wonders? 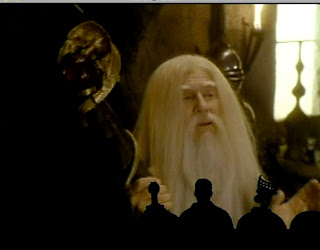 This movie is such a mess it's hard to know where to begin. How about some questions? Do you like Stephen King stories? Did you like Poltergeist? Did you like The Princess Bride? How about that horror compilation television series like Friday the 13th the Series or Monsters? Do you like to watch old ladies explode? If the answer is a resounding yes to all of these - than this movie is made for you.

I think what happened is that director Kenneth Berton made his movie The Devil's Gift in 1984. Then at a later date (before 1996) he took edited footage from that movie, filmed a new story, and created a framing story of Merlin and his shop. Then he tried to sell it as a pilot episode. It never got picked up, so he made some more footage with Ernest Borgnine to create the Grandpa framing story for a direct to video release. Merlin's Shop of Mystical Wonders may have been released in 1996, but the mix of footage belies its origins - especially the 1984 footage - but I'll get to that in a moment. 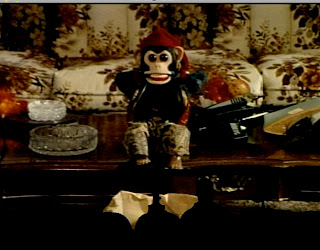 So we've got an edited feature film, a new story, a framing story, and another framing story. It ends up making some sense, but honestly you can't expect a good movie out of this mess. What you can expect is one wonderful bad movie. I'm also curious as to what audience this is supposed to be for. The Merlin framing story is focused on magic and children and innocence. But the stories themselves are filled with evil and pet murder and disturbing consequences. These stories are really like the type of horror material you'd find in Monsters or Tales from the Darkside. But the Merlin framing story and the additional Grandpa framing story are targeted toward kids. I'm confused by this.

The first scenes you have in the film are the old lady drinking booze, and attempting to use her Ouija board to contact her dead husband. Instead she summons an evil spirit, you see the evil monkey and his cymbals. They crash and lightening hits the house causing it to explode. Seriously - first thing you see. Then it cuts to a kid watching the house burn on TV, while Grandpa Borgnine looks on amused. The power goes out and so Borgnine tells the Merlin saga. 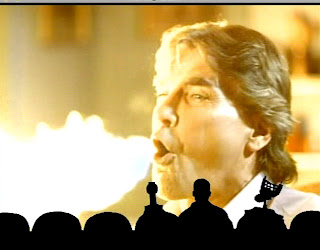 The first tale about Jonathan the jerk columnist is your typical, be careful what you wish for story. Jonathan takes the magical book home and uses it to summon a demon, turn his cat into a monster and make diamonds. All this dabbling in the arcane accelerates the aging process and causes him to see a cheesy demon in a mirror. After a few panicky moments he finds a spell to turn him young. So he grabs his wife, uses some of her blood for the potion and drinks it. Of course he screws it up and turns into a baby. His wife, who's been pining for a baby the whole movie, scoops it up happily. This is so wrong on so many levels that it’s impossible to discuss them all here. Needless to say - Grandpa Borgnine is telling this tale to his grandson!

The second tale in Merlin's Shop of Mystical Wonders is even better. First of all it looks like the director was inspired by Poltergeist and Close Encounters of a Third Kind, because the whole family vibe going on here is very reminiscent of those films. The house itself is pure late 70's decor. Michael, the little boy is running around wearing shirts featuring Return of the Jedi and E.T.. The hair and clothes are vintage early 80's. It is so contrary to the rest of the film, which has a late 80's early 90's vibe to it, even the film stock is different. 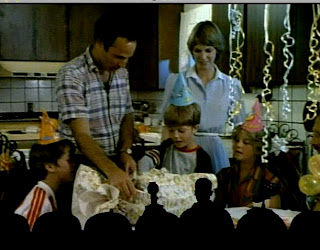 So the monkey arrives and starts banging his cymbals and killing plants and a fly. It eventually starts working its way up the food chain, taking out the pet goldfish and poor Sparkle the dog. David goes to a psychic (who is extremely uptight and angry for some reason). She tells him he has to get rid of the toy without letting it know that is what he is trying to do. Then follows the infamous house-cleaning scene that has to be seen to be believed. The monkey does not go quietly. When it tries to take out Michael, the gloves come off. David drives the monkey to the middle of nowhere and tries to bury it. The forces of evil unleash. It pours rain; the ground opens up and tries to swallow David (or an action figure used as a stunt double in a few scenes). He escapes, only be crushed by a tree. But he's OK. You see, we still have to have the stinger, where the monkey comes back, brought into the house by a nice Grandma. Everything goes crazy, with earthquakes and flames and horror. And then Merlin (who's been inserted in this segment a few times asking people if they've seen his monkey - yeah I won't comment) finally shows up and saves the day. Again, Grandpa Borgnine has been telling this lovely story to his Grandson. WHY? 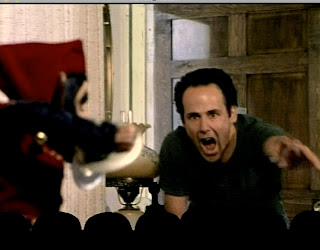 That's just the basic structure and storylines. The acting is questionable in places, but the scripts are so goofy I can't blame the actors too much. Borgnine plays the Grandpa part well, and his voice is perfect for a Princess Bride type voiceover, instead of a movie steeped in evil and horror - but he tries. The low budget is especially bad in the scenes with Jonathon, coming across like a cheap TV episode. The aging makeup is hilarious. The scenes where he is attacked by a puppetty cat had me on the floor laughing. The 80's segment is just as cheesy, but actually sports some creative editing and camera work for a low budget film. The scene where Michael is nearly run over by a car is actually edited so well that it builds tension for a few minutes. The director then ruins this with a nice goofy slow motion shot of David yelling "NOOOOOOOOO!!!!".

This whole thing, I can't really in good conscience call it a film, is a bad movie lovers dream come true. So many disparate elements coming together to create something so odd and bizarre - it was made to riffed on. 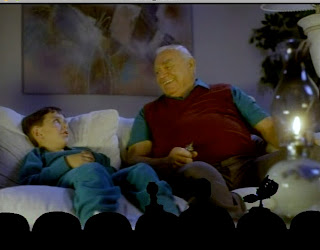 Merlin's Shop of Mystical Wonders could be my favorite episode of Mystery Science Theater 3000 during the Sci-fi Channel years. The movie is a gift. The cobbled together nature provides so much fodder that you can't help but be fascinated by its entirety. It also helps the riffing, with so much going on and changing so frequently, there's always something new to point out, question or mock. Even my detailed review above doesn't do the episode justice. There are so many odd moments and effects and lines that I recommend viewers of bad films to seek it out and anyone who's never seen the episode to give it a whirl.

Mike and bots are in top form here, really letting loose with great lines right from the title screen. The "S" in "Shop" is done up in such a way that it looks like a "C". Leading Mike to quip, "Merlin Chop, 1 pound of Merlin now only $2.99". But the real joy comes from the Borgnine framing story and the moments when Mike and the bots reflect on how this story will affect the grandchild. They manage to throw those in when you least expect it. The first half of the film is pretty good, a solid 4 star effort. But once the devil monkey shows up in the 70's house the riffing escalates. There are so many great bits - Rock and Roll Martian, the housecleaning segment, the birthday party, the burial scene and of course the inserted moments of Merlin wandering the streets and showing people the drawing of his monkey. It's non-stop, and its consistently funny. 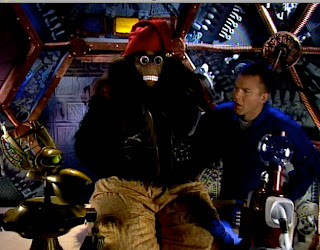 The host segments are also funny. The show opens with Mike and bots engaging in 1920's college pranks. They aren't going so well. Then Pearl receives an experiment from the Institute of Mad Science. She tests it on Mike and the bots, with Bobo as the control group. Bobo screws it up. At the first break, Tom and Crow are inspired by the angry bitter columnist. They start to review each other and it gets ugly. The next segment has Tom using Merlin's book, he wants to levitate an egg - but he turns Mike into a baby. This upsets Mike - waaaaa. The next break has a delivery of Ernest Borgnine's other children's stories show up. Mike and bots read them and are horrified. Contains the quote "They're eating his liver!" The show wraps up with Bobo acting as the devil monkey and failing. Then Observer re-enacts the housecleaning sequence with Bobo.

For me, there is nothing to dislike about Merlin's Shop of Mystical Wonders. The second half is better than the first half, but it ties together so well that the whole episode is gold. This may be the highlight of the season, and one of my top ten episodes. I give it five mystical magical Rock and Roll Martians out of five.


This episode is available on the Mystery Science Theater 3000 Collection Volume 5.
Posted by Roman J. Martel at 6:00 AM