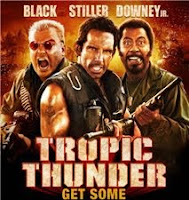 It tough to pull off a good parody film. Most of the time the jokes fall flat or are too obvious. Every once in a while you get a movie that is smart, entertaining and funny. The last one that really entertained me was "Galaxy Quest", but I heard very good things about this movie.

In a bid to make the ultimate war film four of the biggest names in Hollywood are brought together. Tugg Speedman (Ben Stiller) - action star extraordinaire, Jeff Portnoy (Jack Black) - comedian specializing in fat and fart jokes, Kirk Lazarus (Robert Downey Jr.) - an actor willing to do anything to achieve his role, and Hip Hop Superstar Alpa Chino (Brandon T. Jackson). In a bid to create the height in realism, the group is dropped into the jungle for guerrilla style filmmaking. But there's a hitch, a group of well-armed drug lords is convinced that these actors are actual solders sent to hunt them down. How long will it take these actors to realize that they are fighting for their lives, not filming "Tropic Thunder"?

For anyone who loves movies and knows about the filming of war films will find plenty to enjoy here. It takes lots of jabs at Hollywood style filmmaking and personalities. The humor ranges from gross out jokes to nasty satire. If anything its worth seeing the first sequence of fake trailers.

Total: 4
Curious about a full review, send me an email and I'll make additional thoughts to this review.
Posted by Roman J. Martel at 4:18 PM