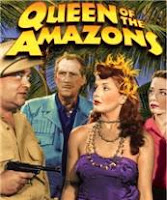 Introduction
Ok guessing time. Is the movie Queen of the Amazons , from the 100 Sci-fi Classics collection, a mythical adventure film featuring the Greek tale of Theseus and the Amazon Queen Hippolyta? Or is it a safari film featuring a white woman ruling over black Africans and featuring lots of stock footage? What do you mean that was too easy?

Summary:
Alas, poor Greg Jones (Bruce Edwards) has been lost while on safari. His fiancé Jean (Patricia Morison) and his father Colonel Jones (John Miljan) head off to find him. Along the way they pick up Gary Lambert (Robert Lowery) a safari guide who doesn’t like women and Gabby (J. Edward Bromberg) a cook who won’t shut up. Little does the group know that Greg is in the hands of Zita the Amazon Queen (Amira Moustafa) and that he’s doing very well thank you. Will Greg return to civilization, and can Jean and Gary keep their hands off each other long enough to figure out who’s trying to kill them all?

Good Points
Bad Points
Overall
This movie is an odd bird. It’s got lots of stock footage of Africa and India, but not much of a story. I could have been a travel log, except it’s got bad comic relief in the form of monkey and crow shenanigans. The acting is passable but the script barely makes any sense. And then there’s the Amazon Queen, a weird character who is set up as a mystery and ends up dull. The movie never gets rolling and it leaves you wishing a little more time was spent coming up with a better script.

In depth review
I haven’t seen too many safari movies in my day. When I was a kid, the local station used to show the 1950 version of King Solomon’s Mines, and this movie kinda reminded me of that, you know without Deborah Kerr and Stewart Granger. Still I was hoping it would be more fun, along the lines of the 1985 version of King Solomon’s Mines with Richard Chamberlain and Sharon Stone. Ok, I knew it would be more like Jungle Goddess with George Reeves.

Talking about the visuals in Queen of the Amazons makes it impossible not to mention the stock footage. Director Edward Finney does his best to work with the stock footage and make it a part of the plot. Sometimes it’s successful, other times it’s painfully obvious that not a single actor from the film is in the footage. But you get all kinds of interesting stuff to see, from an elephant parade during the India sequence, to a lion hunt about half way during the film. Some location shooting (probably in California) helps things a little, and keeps the movie from looking too studio bound, but all in all it’s a wash. The stock footage is interesting at least, even if some of the dialogue that accompanies it is inane or condescending.

The sound and music work well enough creating a typical jungle movie sound without really standing out in a bad way. A few of the music tracks in Queen of the Amazons seem odd, but this score wasn’t composed – just pieced together. It was kinda funny to hear Wagner’s “Die Valkyrie” during a scene where a lion chased down a native.

The acting isn’t too bad for a low budget film. My favorites were Patricia Morison playing Jean. She makes her a tough gal who’s a good shot with a pistol and clever enough to play Gary along till he accepts her as a key member of the group. J. Edward Bromberg makes Gabby a typical annoying character, but hiding a secret. Once the secret is revealed he plays his character differently and it’s an effective turn. Fans of Mystery Science Theater 3000 will get a kick out of seeing John Miljan as Colonal Jones. Mr. Miljan played the drunken and grouchy father from I Accuse My Parents. Here he’s just superior and condescending toward the natives, instead of toward his essay-writing son.

Things go badly with Roger Merton’s script and Finney trying to make the whole thing work. I’m not sure if the stock footage was found first and a script was pieced together around it, but that’s what it feels like. The first part of the movie is the most interesting with the group heading to India (for reasons I never caught). While they are in India an attempt is made on the life of a man who saw Gary last. This all plays like a low budget thriller and is actually pretty well done.

But once Queen of the Amazons slips into African safari mode it losses steam. The stock footage isn’t well integrated. Much of it just seems like an excuse to pad out the film. When the footage isn’t being used, you get lots of walking scenes. Things pick up with a lion attack and warring tribes, but it’s a little too late.

The whole Amazon Queen angle is just as silly as your typical white woman ruling over African tribes can be. But the difference here is that her whole tribe is white women who were lost during a boat accident. She has a pet lion and Gary is her pet as well (and not sad at all!). Once the group arrives at the camp of the Amazons (all four of them) the whole thing turns into talky scenes. The climax where the amazons fight off another tribe and a ivory poacher is nonsensical. The wheels come off and never get righted. But everything ends happily with all our heroes getting the girl they want.

It’s hard to condemn the director. He probably did the best with what he could, but without a better budget Queen of the Amazons just never takes off. The first few minutes are interesting, but once you arrive in Africa, all the comic relief and monkey footage isn’t going to save the movie. I think a bigger budget would have made all the difference.
Posted by Roman J. Martel at 12:03 PM