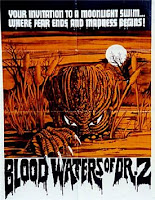 Dr. Kurt Leopold (Marshall Grauer) is grouchy because his peers think he's crazy. So he turns himself into a fishman (Wade Popwell) so he can prove them wrong. Um... OK. Guided by a huge planning wheel he begins to terrorize a small town in Florida. Sheriff Krantz (Paul Galloway) brings in some outside help from Rex (Gerald Cruse) a marine biologist, and INPIT Agents Martha (Sanna Ringhaver) and Walker (Dave Dickerson). But can these four mismatched heroes do anything to cleanse the "Blood Waters of Dr. Z"?

This is a 70's version of a 50's style monster movie. You got your typical mad scientist who feels wronged that his peers call him crazy. So he continues his "crazy" experiments to prove them wrong - which of course only cements the fact that the guy is nuts. MST3K has featured a few movies with these plots such as "Mad Monster", "Bride of the Monster" or "The Unearthly".

The familiar plot makes things pretty easy to script. You've even got the scenes where the heroes use their own science to track and find the monster, even whipping out the old standby Geiger Counter to detect the radiation that the monster throws off.

What make's this movie bad beyond your typical monster movie issues (bad monster suit, overacting, silly pseudo-science) is the lack of tension or thrills or anything to generate "horror" in the audience. Director Don Barton falls into a trap that many movies from the 70's do - pacing and mood.

Editing and basic structure are the main problems with pacing here. The movie opens with a ridiculously performed voice over while we are shown footage of ocean animals (provided by the helpful folks at Marineland in Florida). The long languid shots of the ocean animals does nothing help the pace. We then cut to Dr. Leopold staring out at the ocean and watch as he wanders into an abandoned beachside complex. Over all this a folk song plays. Yeah you read that right. Could this movie start out any slower and more boring? Actually it could, check out "The Incredible Petrified World".

When Leopold finally turns into the fishman, things get slightly more interesting. Oh and he's never referred to as "Dr. Z". Turns out that this movie has gone through a ton of name changes. It was originally called "ZAAT", based off the formula Leopold uses to create the fishman. Other names include "Dr. Z.", Legend of the Zaat Monster", "Hydra" and "Attack of the Swamp Creatures". As I mentioned the fishman suit looks ridiculous. It has fur on it. Poor Wade Popwell stumbles and trips quite a bit in it. While it looks nothing like a fish, it does seem to work underwater. The Gillman from "The Creature From the Black Lagoon" could take this guy out with one webbed hand tied behind his back.

The pacing continues along its slow and meandering way. There are attacks, but the build up is handled in a very clumsy manner. The hunt for the creature is dull. The finale cuts from a guy reading, to fishman carrying a girl through a swamp, to another guy stumbling in a swamp and back through - several times in a row. Wow. Even the 50's monster movies would at least have one scene where the tension worked. But in this movie, not a single scene is scary.

The other issue is the overriding dreary dourness of the film. There is a mood that permeates many 70's films, one that drains the fun right out of them. The film stock is grainy and dark. The lighting leans toward orange and brown. The acting is bored or flat. The climax of these film ends with nearly every character dying or left in some form of despair. This film fits all those criteria, draining even the funnier moments of life.

There are some bright spots. The voiceover continues through the film and it's always good for a laugh. I love Leopolds enormous planning wheel. It's like a Franklin Covey planner for a mad man, with pictures of those who wronged him, and key points (such as finding a mate) relegated to sections of this huge pie chart. The devices that he uses to make fish people is pretty silly looking, and makes obnoxious sounds. You also get some cute girls in bikinis and wandering around in their underwear so that's a plus for male viewers. The music is horribly used, blaring when something of no consequence is occurring. When it is electronic, it drives the viewer insane with it's droning and groaning. Someone take the Moog away from the composer! There is also an attempt to make our default hero, Walker, use a silly amphibious vehicle. It looks like something a toddler would be pedaling around on their front lawn. Handled correctly this chunk of 70's malaise is perfect for Mike and the bots.

But I know we're in trouble when the host segments outshine the riffing. Things start off with Crow taking up chewing tobacco. He hasn't got the spitting part down yet. Before the film starts Pearl experiments by withholding love from Mike and the bots. Crow turns out to be very susceptible to love deprivation. At the first break, Crow hides in the rafters to provide overblown voiceover for Mike. It's as scary as it was in the movie - so, not at all. In the next break, Mike and bots try some fishing. This sketch is a nice throwback to some of the Frank inspired Comedy Central host segments. For the final break, the bots are convinced that nudity helps any scene in any movie. Mike disagrees. To prove the point Bobo and Observer perform a scene from "Glengarry Glen Ross" in the buff. This proves nothing, other than Bill is willing to do a lot for a laugh. After the movie ends the bots come up with other carrying cases you can use to transport items (its based off a nonsensical sequence in the finale). Pearl has turned Bobo into a mar-monkey. Wow!

I know I sound like a broken record, but energy is often a key point to making an episode go from good to great. But in cases where the movies are very slow and dreary, energy in the riffing is a necessity. The movie itself can be too painful, and without a team alive with energy it will actually make the episode fail. That's exactly what happens here.

With a show so dense with jokes and comments, some of them have to hit, just by law of averages. But when the laughs come infrequently you know you're in trouble. I was surprised how limp and lifeless the riffing is in this one. The movie provides the goods but Mike and the bots don't really go after the movie in the way they did in previous and future episodes. The Sic-if Channel years are known for harsher and more aggressive jokes than the Comedy Central years. Now I love many shows from the Comedy Central years. But I've noticed that for a movie like this, you need aggressive jokes that attack the film.

Mike and the bots seem relaxed in this episode and for the most part the jokes they do make just don't click. Things pick up a bit near the end, when the fishman is heading back toward his lair. The little buggy that Walker drives is good for some lines, and the Sherriff’s final battle is good. But really it’s too little too late. I wonder if the crew thought that the movie was so bad that the laughs would come by themselves (and it's easily possible), or if the impending cancellation of the show affected the riffing. Either way, the dreary movie overwhelms everyone, including this viewer.

For me, the 70's films can be difficult, but very funny episodes. "The Incredible Melting Man" from season 7, "Parts: The Clonus Horror" from Season 8 and "The Touch of Satan" from season 9 are all good episodes. Even Joel's swan song, "Mitchell" from season five is classic stuff. But in this case Mike and the bots can't pull it off, and we have one of the weakest episodes of the entire series. My advice, skip this one and if you're in the mood for a fishy monster flick, check out season 8 offerings "Revenge of the Creature" or "Horror at Party Beach".

I give it one planning wheel out of five.

This episode is available on the Mystery Science Theater Collection Volume XVII.