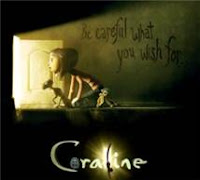 I’ve been a fan of Neil Gaiman’s writing for a few years now. I’ve never read his book, “Coraline”, but while watching the movie I could see his hallmark touches all over the script. So what happens when you combine Gaiman’s mythic storytelling with Henry Selick’s stop motion wizardry?

Coraline Jones (Dakota Fanning) and her family move into The Pink Palace, a large house on a hill populated with all kinds of oddballs. Coraline is having a rough time with the move and the fact that her parents are to busy to be bothered with her. But things get interesting when Coraline finds a secret door in the house, one that leads to a world where her mother and father love her, the neighbors are all fun and wacky (rather than dull and eccentric) and everything just seems more colorful and exciting. There is only one small problem, if Coraline wants to stay, she’ll have to give up her eyes and get them replaced with buttons – just like all the doll-like inhabitants of this world. It quickly becomes apparent that her “other mother” will not take no for an answer, and Coraline must figure out a way to escape the new world and keep it from destroying everything she cares about.

“Coraline” takes a bunch of familiar story elements ranging from “Alice in Wonderland” to mythic native American stories and adds a modern edge to them. The result is an amazingly imaginative story with visuals to match. Even if you don’t care for the story the overall package is just amazing to watch – a real breath of fresh air. For those looking for a bit of the odd and dark in their animation, you will find plenty to enjoy here. Superb voice acting and a good script turn this into something everyone should check out.

I really enjoy Neil Gaiman’s imagination. His novels and short stories are full of all kinds of great characters and situations. He loves mythology and fuses it into nearly all his tales, making them familiar and yet new all at the same time. Gaiman’s main issue in his novels is that he had issues creating an interesting and compelling lead character. Usually the supporting cast and situations of his books are much more memorable. He changed this in “Anansi Boys” an excellent book with a great main character as well as an entertaining story and supporting cast. Turns out, he must have done the same in “Coraline”, because the film version of our lead not only carries the story, but adds a level of realism to the fairy tale that makes it all work.

In many ways Coraline is like a modern “Alice in Wonderland” or more accurately, “Through the Looking Glass”. The main difference is that Coraline is more of an active participant in both of her worlds. Alice gets to react to the strangeness around her, but Coraline ends up directly affecting both her worlds by her actions. Because of her actions and her attitude, she comes across as a real girl and as someone we can understand. When we first meet her, Coraline seems to be a bit of a brat, but when she tries to interact with her parents we see why she acts the way she does. You start to feel bad for her, and when she finds the perfect world behind the door – it does seem appealing.

This set up is key for the rest of the film to work. We have to like Coraline and understand her, so when she starts to make decisions we go along with her. Luckily the script is written well enough to provide us with enough time with Coraline and her two worlds that we clearly understand what’s at stake in the last half of the film.

The worlds created here are truly an amazing mixture of imagination, darkness, color and quirk. As lauded as “Nightmare Before Christmas” is, I have to say that “Coraline” visually trumps it. Selick creates two worlds that look alike in many ways, but are so vastly different that we know immediately where we are. Coraline’s real world is drab and what strange elements that do exist aren’t colorful or fun. This is all executed with a wonderful visual sense. When colorful items show up, like the gloves that Coraline wants, they pop off the screen.

When Coraline goes into the other world, the colors are very rich and the result is that Coraline herself looks a bit on the drab side. The garden is definitely the highlight of these establishing moments. The flowers, water and grass are beautifully luminescent. The animation as Coraline gets her bird’s eye view of the garden is also impressive.

The design of the worlds isn’t the only thing that’s impressive, but the stop motion itself is amazing. Scene after scene passed looking like magic. I was amazed with the fluidity of the motion, the way certain characters seemed to fly through the air, and the skill that the cat’s movement was created. Sure some things were a bit exaggerated, but it never took away from the film. A lot of love went into making this film and you can see it on the screen.

To assist in the creation of the world is all the sound effects that need to be added to what is essentially a silent film process. The dull real world sounds of rain hitting the window or the sound of a bike rolling over grass are captured and used perfectly. And as you might expect there are more outlandish sounds used for the Other World and its characters. Highlights include the mouse circus and the climactic battle against the vicious Bedlam.

The music is really something else. It shifts so easily and effortlessly that it creates It’s own unique tapestry of styles and moods, each matched well with what is on screen. While I didn’t detect any distinct theme, there was a nice little children’s choir used to provide some haunting vocals in key places. There is funky jazz pieces and eerie moments that creep along the soundtrack. It’s an interesting mix, one that may not play well away from the film, but it fits it like a glove. The much advertised new song by They Might Be Giants is cute, but extremely short. I hate to be cynical but it feels much like a marketing device at worst and a nice little inclusion of someone’s favorite band at the best.

The voice acting is uniformly good, and has a few stand out performances in it. Dakota Fanning has the toughest job of making Coraline work as a character, and she does a great job. But for me the real surprise is Teri Hatcher who plays Coraline’s mom and her Other Mom. These characters are key to the whole film and act as foils for Coraline. The real world mom seems exasperated and harried most of the time. But she does show us some glimpses of caring for her daughter. The Other Mom is a much more interesting character, one who is sickly sweet on the surface and yet devolves into the real monster of the film. Hatcher makes the transformation very believable and that makes the climax much more exciting.

The supporting cast does a great job as well with Jennifer Saunders and Dawn French doing well as the dotty old actresses. Ian McShane plays the circus performer Mr. B with verve. But Keith David nearly steals the show as the cat.

The script ends up working fine, but gets a bit predictable here and there. Anyone familiar with fairy tales and mythology will know where the story is going and see the ending coming. There are a few familiar twists involved but nothing too exciting. The flip flopping from world to world seems to be a bit overdone at the half way point in the film, but it’s all needed to establish the climax, and looking back it, the structure makes sense. But at the time, that middle portion of the film drags a little bit. It’s not a major pacing slip, but the movie is pretty long, nearly two hours, and you begin to feel it at that point.

I found “Coraline” to be very entertaining, and highly rewatchable. There is so much going on visually, that you almost need to see it twice to take it all in. Not only that, but you can really check out the amazing animation at work in the film. Now the movie is dark in places, and has some scary sequences in it. I can’t imagine that younger viewers are going to not get nightmares from Bedlam and her creepy crawly friends. There is also some odd semi-nudity during one scene. It wasn’t offensive, but just seemed to be out of place. On top of that, there is some really odd humor at work in the film. I found most of it funny, but I could see some people turned off by it, or worse seeing it as being weird for weirdness sake. But I think it all adds up to a very good movie, one I wouldn’t mind revisiting in the near future.
Posted by Roman J. Martel at 2:46 PM