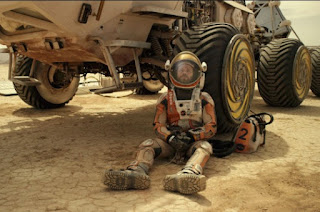 Well here was a movie with a lot of good buzz around it. I kept hearing how it was Ridley Scott looking like he was back in fine form after some disappointing movies (although I though Prometheus was pretty good). Then all the "I'm going to ____ the hell out of this" memes started showing up. Finally, my wife got her hands on the book and read through it very fast (and that is saying something because she is already a fast reader). She loved and told it me it was a must read. Sure enough, she was right. I really enjoyed the novel and was looking forward to seeing how Scott adapted it.


Two Things I Didn't Like:
Overall
Minor quibbles aside The Martin was a really entertaining film. Scott's direction is spot on, building on the loneliness and perils of our stranded hero, as well as the tension and urgency of the folks on Earth struggling to get him home. Damon delivers a fine performance and it works well with the humor and horror of the situation. Fans of the novel may be disappointed by some of the changes and omissions, but all in all it is a fine adaptation. Well worth checking out, but beware the montages featuring 70s disco classics!

Boogie on over to an ad and give it a click disco fans!
Posted by Roman J. Martel at 6:00 AM