Hector and the Search for Happiness (2014) 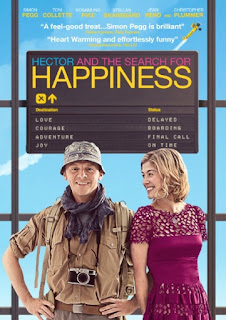 Introduction:
It is just one of those things we all face. According to movies, television and commercials especially – we all need to be happy all the time! I think the movie Inside Out lays out a pretty good case against being happy all the time, but I digress (and only in the third sentence, a new record)! So here we have a movie about a man leaving everything to find his happiness. Kind of reminds me of American Beauty, but with Simon Pegg instead of Kevin Spacey. Does that mean you need to be very, very afraid?

Summary:
Hector (Simon Pegg) is a psychiatrist who lives a very ordered life with his girlfriend Clara (Rosamund Pike). He has a routine and it trundles along until one day he loses his temper with one of his patients. He comes to the realization that he doesn’t really know why people are happy and how they would define this happiness.

This inspires Hector to take to the road and see the wide world. His travels take him to bustling Shanghai, a lonely monastery in China, a war zone in Africa and finally into the suburbs of Los Angeles. Along the way he meets a bunch of unique folks who express to him what makes them happy. But can scenes with Jean Reno, Togo Igawa, Christopher Plummer, Stellan Skarsgard, and Toni Collette aid Hector and the Search for Happiness?

First things first, just because Simon Pegg is in this film doesn’t mean it is a comedy. This is a road trip drama with funny moments. The film is trying to be whimsical and yet provide some food for thought. It is worth watching the film to see Pegg run the gamut of emotions with his excellent performance. You also get some gorgeous location shooting in China, Africa and California. Some of the visuals are inventive as Hector’s journal comes to life on the screen. But it does end up crossing from nifty to a little too much for me. Almost like they felt they needed to spice up the road trip story a bit. Depending on how you feel about the message, you may enjoy the movie a bit more than I did.