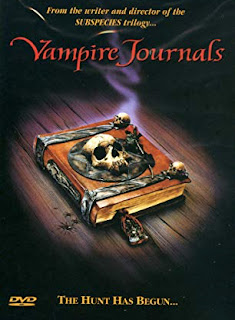 Oh Ann Rice, what have you wrought? Vampires went from one of the most feared creatures of the horror world into the misunderstood bad boys of goth fans everywhere. Her novel Interview with a Vampire got things off to a start back in 1976. Young adult books like The Vampire Diaries first started in 1991 were all the rage. When a film version of Interview with a Vampire in 1994 changed the landscape of the vampire world vampires had to evolve. Full Moon wanted to make further vampiric adventures in the Subspecies universe, but Radu’s pure evil nature wasn’t cool. Time to get cool. Time for some Vampire Journals.

So technically this movie was made before Subspecies IV, chronologically the events occur after that amazing film.

Alas for poor Zachary (David Gunn), his mortal life was destroyed back in the 1890s when he was turned into a vampire and his lover was slaughtered. He vowed vengeance and has turned against his vampiric nature. His only goal is to hunt down and kill the evil Ash (Jonathon Morris). This vile bloodsucker seems to be the source of the vampire scourge that Zachary wants to get to the root of.

He better hurry because Ash has his eyes set on a lovely classical piano player named Sofia (Kirsten Cerre). Ash loves her talent and feels that if he makes her immortal, her skill will increase until she is unmatched. And of course he wants to suck her blood and turn her into a willing slave – you know, typical vampire lord goals. Zachary takes a liking to Sofia and does his best to try to save her, but Ash has deadly minions of his own, and it becomes obvious that even with the powerful Sword of Laertes, Zachary may be outmatched. If he fails, can hope be found in his Vampire Journals?

So this movie was surprisingly entertaining. Not because it was good, but because it was so cheesy. Series director Ted Nicoalau rejects the classic gothic horror of the previous Subspecies films to attempt a music video style approach to this film. It is “cool” and “sexy” and almost none of it works the way it was intended. If you like your vampires scary and evil, this film will annoy you. But if you can enjoy the hilarious dialogue, questionable acting, delightfully evil performance by Morris and the overall 90s silliness of the whole production you will have a good time. Ignore the Subspecies connection, and just put this one on for some popcorn Halloween-time fun.

Most fans of Subspecies feel this entry in the series is the nadir. To be fair, this isn’t an official entry really. It looks like Full Moon and Nicoalau were trying to spin things in a new direction with Vampire Journals. We had a new protagonist, new antagonist and new lovely lady. Radu is mentioned in one scene as the mentor of Ash the new vampire lord, but that is really all the connections we have here.

But you know what, I was OK with that. Subspecies III wasn’t all that good, and it ended on a mostly satisfying way. I was fine for shifting things in a new direction. The opening credits set the tone here. We get dark romantic sounding music over shots of a snow-covered graveyard in Romania. It sets a different mood right away, one that is bit more gothic romance in the Ann Rice style.

The first scene is a doozy and is representative of what you are getting into here. A young woman is twirling in a diaphanous gown in a huge house as a hulking man in black watches her. There is a piano nearby surrounded by lit candles and right away, as a rock fan of the 90s I started cracking up. Especially when a close up of the hulking vampire flashed on the screen. Someone watched the Meatloaf video for “I’d Do Anything for Love (But I Won’t Do That)” and was inspired. The music video was directed by Michael Bay (yes, that Michael Bay) back in 1993, and was all the rage.

This scene looks like an outtake from the music video, except instead of the woman swooning at Meatloaf/monster this one screams and runs. But it is too late! Meatloaf/monster attacks and starts to drain her blood. Our new hero Zachary steps in, and wielding a ridiculous looking sword decapitates Meatloaf/monster. Was that Nicaolau’s commentary on the music video? Or was it just to get things started off with a bang.

The rest of Vampire Journals really keeps that Michael Bay music video style of lighting and overall style. It is quite a bit different compared to the look Nicaolau was going for in the previous films. It changes the overall tone to one that is less concerned with horror and more concerned with cool and sexy. Sometimes things work out, like the first scene where Ash watches Sophia play from an underground vantage point. Other times it just comes across as trying too hard and leads to chuckles.

There are other influences here. Phantom of the Opera is certainly one. We have the talented musician who is coveted by the monster. Interview with a Vampire inspired other aspects, especially the long hair both Ash and Zachary sport (very influenced by Cruise and Pitt’s look in the film). Zachary’s tortured narration apes the same thing we get in Interview from Pitt, with all the same melodrama, but this time it comes across as overripe and funny. This film also came out the same year as Buffy the Vampire slayer hit television. As much as Zachary feels like he is a low budget version of Angel, I’m not sure the influence actually occurred.
Vampire Journals is primarily concerned with Zachary brooding and providing lame voiceover while we observe how “cool” and “sexy” Ash is. The scenes with Ash are a lot of fun. I think Morris knew exactly what kind of movie he was in. So he goes for a devilishly evil take on the vampire as hedonist. He commits to the role and exudes that wicked confidence and suave smoothness with ease. In another movie, he would be a great villain. But here, surrounded by Michael Bay lighting and given a script that meanders around, he ends up feeling like too much of a good thing.

There are a bunch of strange subplots and characters that have potential, but don’t seem to go anywhere. You have Cassandra (Ilinca Gola) who is Ash’s most recent fledgling (still over 100 years old). Ash won’t trust her to go hunting alone, and we have a lot of scenes with the two of them bickering, and finally a hunting scene – but it never really moves past that. Her performance is appropriately over the top and fun, so the scenes between the two are never boring, just feel like padding in the overall scheme of things. Cassandra does get to go toe to toe against Zachary near the end of the film. It is a sword vs. mic stand battle you have to see to believe.

You also have Iris (Starr Andreeff) who owns Club Muse where Ash has his hedonistic vampire abode. Iris is human, and certainly dresses like the femme fatale of the film. It is never really revealed why she is working with Ash, but it is implied that money may have something to do with it. She’s an interesting character that they don’t do too much with. You also have Dimitri (Mihai Dinvale) as the foppish vampire with a taste for male blood. I think he’s supposed to be funny, but mostly he just sashays around the screen and makes wry observations. We don’t feel all that bad when Zachary literally twists his head off like a toothpaste tube cap.

Then there is a less than interesting subplot in Vampire Journals about some vampire gangsters that betray Ash or something along those lines. Most of these actors have very thick Romanian accents, so I was having trouble following them. Also they were some of the weakest actors of the bunch. In the end I didn’t care about the subplot, and while it showed that Ash’s power was weakening among his vampire comrades (and Iris), it filled up more screen time than it was worth.

The sound effects are up to the same quality that you’ve heard from Subspecies. The music is also on par. However there is a very distinct sting using strings each and every time a vampire bites a victim. And since we are watching a vampire movie it happens quite a bit. You could create a drinking game for that little musical motif and end up very inebriated by the end.

While the script to Vampire Journals is overly familiar, that is part of what makes it fun to watch. You can spot all the references to Phantom of the Opera, and Interview with a Vampire. You can chuckle at how Sophia flops around like a spastic doll whenever Ash drinks from her. You can snicker at the ripe dialogue, and silly long hair all the male vampires sport. You can shake your head at the cartoonish design for the SUPER vampire slaying sword that Zachary wields, and then loses and then wields again. The movie manages to hit all the tropes, and include plenty of gore, over the top kils and naked chests to suit your vampiric lusts. There is a just a lot to enjoy here, because of all its cheesy faults, it does manage to entertain. While I do tend to like my vampires more on the scary than the sexy side, I will say that this makes for a fine evening for Halloween themed popcorn viewing.
Enjoy this review? Click an ad and support this blog.
Posted by Roman J. Martel at 6:00 AM