And Then This Happened... Bloodstone: Subspecies II

You would think that being a very old and powerful vampire that you'd be able to take care of a few silly coeds and your annoying but wimpy brother. But as we saw in Subspecies, Radu just wasn't able to manage it. Luckily he has some help from this friends, who also manage to rate so highly in the minds of the creators that they named the series after them. Still not sure why, but I digress. In any case Radu's little buddies are able to come around and give him a hand. Otherwise we wouldn't have a sequel, right. But I think there might be some more conversation going on here than was originally revealed in the film. What do you think they are saying? 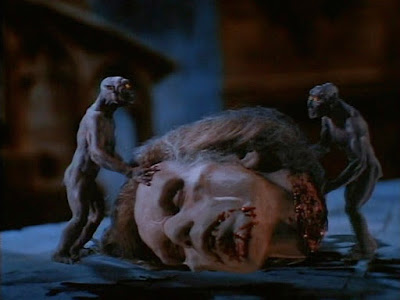