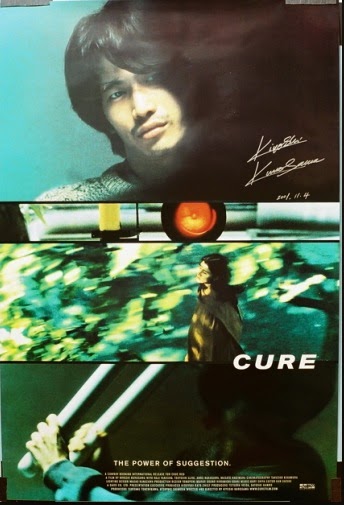 Introduction:
Kiyoshi Kurosawa is a Japanese director I’ve had on my radar for a long time now. I’ve seen a couple of his movies and they were very intriguing. In many ways he reminds me of David Lynch. He has a very strong visual style, knows how to use sound to add and develop atmosphere, he doesn’t rely on plot, but rather on themes and visuals to carry the viewer along. His films take their time building toward a climax. I enjoyed the two films I’d seen previously, but I felt I was missing something. So I decided to go back to the film where Kurosawa really made a name for himself.

Summary:
There appears to be a serial killer on the loose. Several people have been found murdered with a large X carved into their body, severing both major blood vessels in the neck. Sometimes this was the cause of death; sometimes this was done after the fact. But the most puzzling element to the case is the simple fact that no clear connection can be found among this wide variety of victims. Detective Takabe (Koji Yakusho) is finding it incredibly frustrating. At home things aren’t any better for him. His wife Fumie (Anna Nakagawa) is suffering from a mental illness that causes her to forget where she is and react to him in confusing and contradictory ways.

A break in the case comes when a strange young man (Masato Hagiwara) is found near the scene of one of the murders. He has no memory of his name, his life or even what question someone asked seconds ago. Instead of answering questions, he constantly questions others with the simple phrase, “Who are you?” The more detective Takabe interacts with this young man the more convinced he becomes that the young man is somehow causing these murders to occur. Takabe’s physiologist friend Sakuma (Tsuyoshi Ujiki) warns him not to get in too deep. But Takabe is convinced he may have found a Cure to the illness that plagues this city, but it may turn out that the medicine is more bitter than he expects.


Overall:
This is an intriguing film, showing off some masterful skills with camera work, sound effects, editing and mood. Even with the obtuse plot, Yakusho delivers in his role as the frustrated detective who may be losing his mind (or maybe not). Make no mistake, the answers do not come easily in this film, but there is a method to the madness. If this sounds intriguing to you, definitely check it out. I found it a wonderful exercise in building and executing dread.