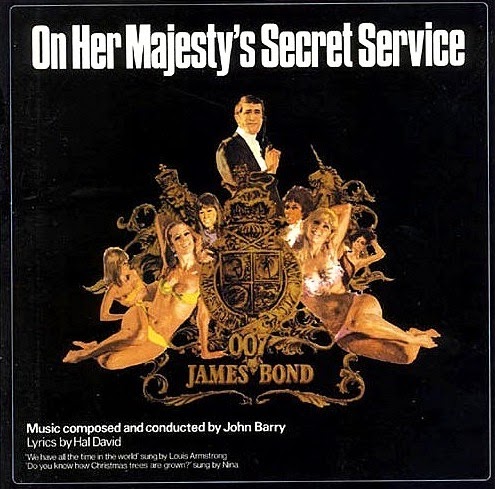 The producers of the James Bond series were at a major crossroads in 1969. They had a new actor in role of James Bond and were not sure how audiences were going to react to this. So they went out of their way to make sure that audiences knew that On Her Majesty’s Secret Service (or OHMSS as I’ll call it from now on) was the same James Bond film they expected and wanted, but with a new actor in the role.

One of the key production elements to help with this concept was the music. The producers brought back John Barry, who provided the score for the previous four James Bond films. His signature brassy boldness was what made everyone know this was a 007 adventure.

However, OHMSS was not your typical Bond film (no matter how much the producers tried to convince everyone). The result was that John Barry actually composed a more colorful and intricate score than most of his previous ones (with Thunderball matching it for variety of themes and color).

The first thing Barry did was give Lazenby his very own orchestral theme. This is probably one of the best action themes Barry ever wrote for the series. You get to hear it in full during the opening credits. This makes OHMSS the only film aside from Dr. No that doesn’t have an opening theme song. The theme is played several times, especially during the action scenes in the second half of the film. The Monty Norman James Bond theme (that we all know and love) is used sparingly and usually only hinted at. It shows up bold and proud in the gunbarrel sequence and the end titles. In the film you also get the classic version from Dr. No played as bond storms Piz Gloria.

The other main theme is the love theme. It is actually the main song from the film. We Have All the Time in the World is given some lovely renditions in the film, with a full string version during Bond’s first intimate encounter with Tracy, and later a tender version as Bond proposes to Tracy (in the clip below). Louis Armstrong performs the most famous version during the falling in love montage. This was the last piece that Armstrong ever recorded, and he does an excellent job with it.

These two themes make up the majority of the score, as Barry uses them to show us both sides of James Bond. They are both top-notch themes and very adaptable. Based on that alone, this score would be one of the best of the franchise. But Barry adds some extras to make this one a classic.

First off is an extremely silly and syrupy Christmas song that you hear a couple of times in the film. It is called Do You know How Christmas Trees Are Grown? and the lyrics are wretched,  but the tune is pure Christmas cheese. You hear it when Bond first arrives in Switzerland with all the other tourists. But one of the best uses is when you hear it dripping with irony as Bond is being hunted by killers in the small village. Director Peter Hunt (who was an innovative editor in the previous Bond flicks) synchs his edits with this silly song, providing a horrifying counterpoint to the danger as it swells around Bond and when he looks up and sees Tracy and the children’s chorus sings, “… he needs love!”  But one of my favorite uses is when Bloefeld explains his evil plot to poison the major food resources of the earth. He does this while there is a huge Christmas tree in the background. Barry plays a sinister version of the song. It’s a nice musical joke, as Bloefeld explains his horrible Christmas present to the world (it is certainly not love).

There are also some interesting motifs only heard one or two times in this film and then never heard again. When Bond attempts to crack a lawyer’s safe, Barry creates a nice tension theme that gets more and more intense as it plays. This track Gumbold’s Safe also highlights a 007 first. OHMSS is the first score in the franchise to use electronics. You can hear them most clearly in this track, but they appear in the gunbarrrel sequence and opening titles as well. You also get a taste of them in the track Bobsled Chase which also features it’s own motif. There is even a romantic sub-theme for when Bond meets and romances the gals at Piz Gloria.

This track, Blofeld’s Plot, gives you a taste of the various styles and minor themes. It has the silly Christmas song in it’s sinister form at about a minute in. It has an electronic pulse at two minutes and forty seconds in as the girls fall under the hypnotic suggestion. At about four minutes the music turns into a mix of slow build to a stinger near the five minute mark. Bond just got clobbered.

This is very robust score, with a lot of variety and some really excellent tracks that balance action, romance and thrills in a nearly perfect fashion. It’s a masterful fit to the film. You really get the feeling that Barry was inspired on this one. He wouldn’t hit this kind of high point until the 80s with TheLiving Daylights, another introduction to a new actor in the role and a switch of tone for the series. So while Goldfinger and Thunderball provide nearly iconic versions of the brassy Barry sound, On Her Majesty’s Secret Service is the best 007 score of the 1960s.

And here is the version of We Have All the Time in the World performed by Louis Armstrong.