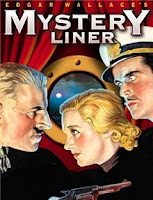 I like cruise ships. I like mysteries, since I pulled this from the 100 Mystery Classics Box. Seems like this flick about a mystery on a cruise ship could be good. On top of that and it is based on a short story. Well that sounds like a lot of fun… right?

Captain Holling (Noah Beery) is nuttier than a fruitcake. He’s ranting and raving about his ship, and so he’s unfit for the next voyage. This is unfortunate because the next voyage will test out an experimental navigation computer that guides the ship by radio! Still the experiment must continue and that means that Captain Downey (Booth Howard) must step into the Holling’s shoes. But foul play is suspected, and Major Pope (Edwin Maxwell) is on the case. Soon the suspects are lining up from pretty Nurse Kane (Astrid Allwyn) to the mysterious Von Kessling (Gustav Von Seyffertitz). Add in the chuckle fest that is Granny Plimpton (Zeffie Tilbury) and you’ve got a real “Mystery Liner”.

An interesting espionage thriller is torpedoed by bad acting, a poor script and bad direction. The pacing is badly mangled and you’ll find yourself struggling to care about any of the characters, much less wondering if the mystery of the liner will be solved.

This movie never gets off the ground. There are a lot of interesting elements at work, but director William Nigh can’t get any of them to gel. Let’s see what he had to work with here.

The visuals aren’t too bad, it looks like it was filmed aboard a real ship, or at least filmed in a set created by someone who’d been on a ship before. There is some bad stock footage used, as well as a couple questionable special effects. On top of that the film has very little style to it. Most of the camera shots are simple locked off angles with little movement or shadows. In about ten years a similar film would have been dripping with noir. The sound effects are basic and some badly placed mics make dialogue a bit tough to hear. The movie only has opening titles and ending titles fan fare, and no score to speak of. I don’t judge that against the film, but a bit of music could have helped.

The actors are either wooden or wildly emoting. This is something you see in 30’s movies, with some of the actors used to performing in silent films where pantomime was king. It makes for some comical moments, but mostly it just hurts the film. Astrid Allwyn as the nurse if the best, presenting a character who seems the most realistic. Edwin Maxwell as Major Pope isn’t bad. In fact he reminded me of the characters that Charles Grey played in “Diamonds Are Forever” and “You Only Live Twice”. I suppose that Zeffie Tilbury isn’t bad as Granny Plimpton, but her character is so annoying that I find it hard to give her credit.

The characters are part of the problem, from ill timed comic relief in form of Granny Plimpton or Simms the Steward (a baffled bumbling George Cleveland), to the stoic and bland Dr. Howard (Howard Hickman). You wonder who decided to populate this mystery liner with these characters. The idea of the radio-controlled ship may sound silly to us now, but it’s one that could have been intriguing for moviegoers in 1934. But the experiment is handled badly coming across more silly than scientific. The espionage and sabotage angle has promise, but the script botches that too.

On top of it Director William Nigh keeps the pacing too slow, even with action erupts (slogs is better word) in the final ten minutes. The comic relief is badly placed, stopping any mystery elements or action elements in their tracks. Where crisp delivery of lines would help, actors take their time. It’s just a mess from the opening with the ranting captain to the conclusion where the enemy agent is revealed.

The movie is only 62 minutes long but I struggled to stay awake. None of the characters grabbed me. I was mildly interested in which one of these people was an agent. The script and the director don’t give you enough clues to follow, so it really could be anyone. While the movie didn’t completely fail, it was bad enough to bore me. I don’t think even riffing could help this flick; it’s too slow moving and too ineffectual to provide enough to work with. Not a disaster, but not good enough to seek out either.
James Lileks didn't like it too much either. Check out his review here.
Posted by Roman J. Martel at 11:11 AM