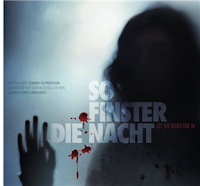 When this movie came out a lot of comments were made that this is how a real vampire movie should work – you know as opposed to “Twilight”. Well you can say that about a lot of vampire movies. I was still intrigued because the story sounded like it could provide some creepy moments.

Oskar (Kare Hedebrant) and his mother live in an apartment in Stockholm. Oskar has it rough; he’s bullied at school, doesn’t seem to have any friends and is at an age where everything about him seems off (middle school I’m guessing). Then Eli (Lina Leandersson) moves in and things change. Eli befriends him, but she only comes out at night and her skin is cold to the touch. Then strange murders and attempted murders start occurring in their neighborhood. Oskar begins to suspect that his new friend is much more than she appears – but is that really going to change their friendship?

The movie’s main focus is on Oskar and his relationship with Eli. The fact that she’s a vampire puts a spin on it, and the movie never shies away from what that may mean. It makes the movie more creepy and disturbing, as it should be. In the end that is the main goal of the film, to get under your skin and it does so very well. I wouldn’t call it a horror film, but something more like a dark romance. I recommend it to anyone who likes some vampires in their foreign films.