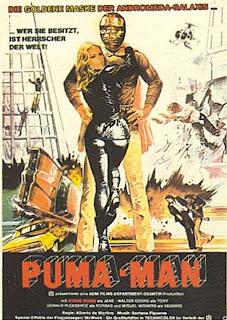 Professor Tony Farms (Walter George Alton) is your typical dweeby archeologist. But he has just passed the test to become the Puma Man. You see the mysterious Aztec Vadinho (Miguel Angel Fuentes) has just tossed Tony from a window. Tony flails around in front of some rear projection and survives thus revealing his innate abilities to fight evil.

It’s just in time too, because the evil Kobras (Donald Pleasance) has a diabolical scheme. First he will dress in some of the worst clothing you've seen. Then he'll use an ancient Aztec artifact to possess the minds of the world leaders and thus – control the world! Can Puma Man learn all of his super abilities in time? Is the lovely Jane Dobson (Sydne Rome) helping Puma Man or hindering him? Will the theme song drive you insane? And just how did they pull off those flying effects?

When Superman hit the screen in 1978, it proved to the world that comic books could yield entertaining films. The real comic book boom didn’t hit until after 1989 with Batman but after ’78, we did get quite a few wannabe super hero movies. This is one of them. 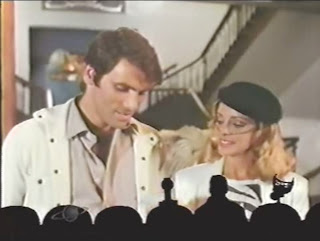 Released in 1980, Puma Man tries it’s hand at creating a fun super hero adventure. Take an interesting premise involving an ancient artifact and a chosen one, add in a power mad villain and the story writes itself, right? Somewhere along the line you’ve gotta determine if you are making a real adventure film, or a spoof. This is one of the really confusing elements of this film. Some cast members look like they are doing everything with a wink and smile. Then there are other folks who are dead serious.  The attempts at humorous scenes don't work at all, but obviously they are supposed to be funny. But other moments seem to be attempting to create some drama. Was the script always this way? I'm betting it was more like the director was looking over the dailies and realized how bad it all looked and decided to try to turn it into a comedy.

Take the flying sequences for example. They stink. No really, they make the 50’s TV version of The Adventures of Superman look like modern day special effects. They are horrid. Was Mr. Alton was told to hunch over and flail around a lot? And whoever is operating the rear projection or blue screen is drunk or high. The result is that Puma man looks like he's flying at odd angles while spiraling his arms around. It's ridiculous looking, and therefore this must be a spoof, right?

Another bizarre point is that Puma Man doesn’t really have the powers of a puma. Once he puts on his cape and oversized belt he can fly, you know, like a puma. He can warp dimensions and teleport, you know, like a puma. He can use his bare hands and carefully manicured fingers to rend steel. He can simulate death with a blank stare and no heartbeat. Puma man is seeing bouncing around a room (with obvious assistance from trampolines), and other times he can hover, hummingbird-like in front of his prey, just like the pumas we all know and love. But seriously, the only thing remotely cat like about Puma man is that sometimes he can see in the dark. This is shown in the film using a hideous red filter over the action, rendering everything muddled and hard to make out. 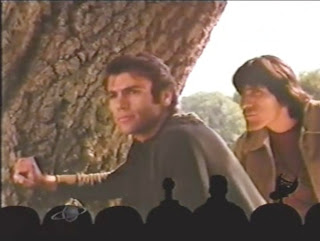 Looking over this list of powers, the movie has to be spoof. But Vadinho reveals each power without a smile, and with such conviction that you almost believe him. These are sacred powers given to Tony by the gods from outer space [snicker snicker]. I can't even write that without laughing.

One of the major problems with Puma Man is that he is a completely useless hero. Alton plays the superhero as a whiney dork who is supposed to be the hero because the script says so. He's not imposing at all. He doesn't come across as smart, or clever. Instead he seems to spend most of the movie lost without a map. He constantly is defeated and has to be saved by Vadinho. The movie even goes so far as to have Puma Man completely neutralized, and the Aztec "sidekick" prepares to go on a suicide mission to take out Kobras and the magic mask once and for all. At that point, we are all hoping that Vadinho becomes our hero.

Then again, maybe this is all part of some elaborate plan to undermine the movie on purpose. Is this a clever deconstruction of the superhero trope, one that is both artistic in its failing and comedic once you stand back far enough and...

No. Look at how Donald Pleasance is dressed and tell me what the hell is going on here? 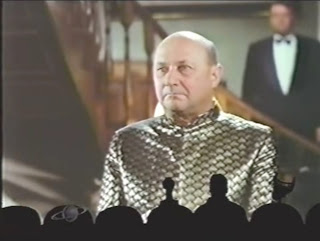 Ok, the acting... the acting. I've already commented on Alton's wimpy performance. But I have to say he appears to be in on a joke. He never is convincing because he seems to be smiling to himself knowing just to stupid this all is. In the same boat is Rome as Jane Dobson. She looks great in her black leather outfit, and she isn't bad for for the most part. When she isn't playing the femme fatale she smiles a lot and actually has some chemistry with Alton. When the two are on screen you can almost see a fun comedy film at work here. But the two stand out in a bad way when things get serious.

On the other side of the coin is Pleasance who plays the whole thing terribly straight. He glowers, he threatens, he schemes, as only Pleasance can. This is basically the same character we saw in Warrior of the Lost World  or You Only Live Twice. The big difference here is the stupid looking costumes he gets to wear the ridiculous mask he uses time and again to control minds. At least he is trying, even if it forces him to say some really stupid lines and pretend to be menaced by Puma Man. 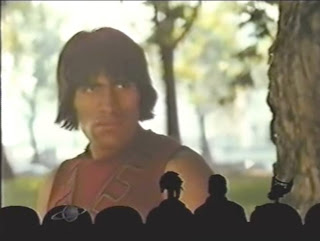 Fuentes is the real star here. As I mentioned he plays the part of Vadinho with conviction. He seems at once spiritual, brave, completely in awe of the powers of the Puma Man. I've got applaud the actor for being able to look convinced that this scrawny little man hopping around the screen can save the world. On top of that, he looks like he could take on some serious thugs, and does some solid stunt work in the final battle scene (even if the camera angles don't help by showing that not all his punches are connecting).

Oh and one more little nitpick. The music is hilarious. It’s as if someone took their 1979 Casio keyboard, and plinked out the most simple childish melodies they could come up with. It reminded me of an old 80’s television show called Pinwheel – for the preschool crowd. In addition the music is horribly matched to scenes. Sometimes coming across super happy for no reason or tense when someone is walking down the street and in no danger. Just a mess.

It’s all true, Puma Man or L’uomo Puma in it’s native tongue, is laughably bad. It’s what happens when low budget meets no script all in an attempt to cash in on a more popular film. And Mike and bots are ready for it. 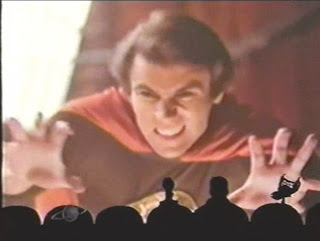 The crew at Mystery Science Theater 3000 had never tackled a super hero flick before. They had done their share of '60s James Bond rip offs, and even some old '40s and '50s serials with super hero elements (Commando Cody and the Rocket Men). And after watching their work here, I wish that had tackled more straight up super hero movies.

Puma Man offers rich bounty, and they don't waste a drop. They really rip into Tony and his superpowers. Really how could they resist. His hair, his wardrobe, his whining - it's all up for grabs and they are pretty relentless. But the result is hilarious with them finally deciding that they want Vadinho (who they start calling Vadalia, as in the onion) to be the hero.

Some of my favorite riffs are based off the hilarious musical score. All three riffers get a chance to start singing their own lyrics to the simplistic tune. These range from the clip above where Puma Man flies like a moron, to turning it into a jingle for party dip.

Donald Pleasance gets riffed on as well. He loves to say "Pyuuuuma Man", and the bots keep correcting him. Mike keeps confusing him for all kinds of things, like "an old baby" or "an egg". And then there is his outfit and the quote, "I'm and Pleasance and I am funKY!" 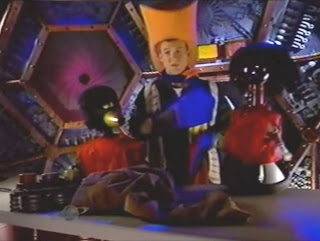 This is a top notch riff-fest, and it's a shame that the rights to this film are all tangled up. It doesn't look like it will be available on DVD in the foreseeable future. It ends up being one of the best episodes of the Sci-fi Channel years and easily one of my favorites of Season 9.

The host segments mostly stay aboard the satellite in this episode. Tom Servo deals with Short Man’s disease. Later Mike is inspired by Tony's '70s hair to attempt the “Dry Look”. At the next break the bots decide that Mike is the one and only Coatimuni Man. They get him a ridiculous costume, a happy synthy theme and even an alien god!  Inspired by the mind control device in the movie, the bots attempt to use a paper-mache head to control folk singer Roger Whitaker. Back in Castle Forrester Pearl tries to throw a grand ball, and fails miserably – while Brain Guy and Bobo have fun with a Sliders viewing party (wow that was a '90s flashback). Roger Whitaker shows up to round out the festivities

So you get a top notch episode and entertaining host segments it makes this episode a winner. No need for mind control or Aztec guardians to influence my decision.

I give it five flailing Puma Men out of Five.

This episode is available on DAP

And now as a special treat, a full version of the theme from Puma Man. Enjoy!