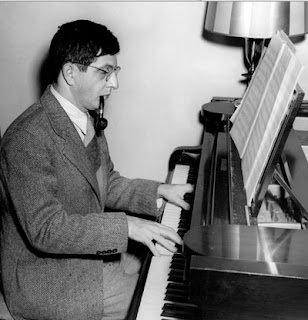 In the previous installment of my Favorite  Composers series I covered the work of Japanese composer Yoko Kanno. My interest in Japanese anime is what introduced her work to me. But for the this installment, I go back to my childhood and some of my favorite films and the music that accompanied them.

If you couldn’t tell by now, I like my film music big and bold. In the golden age of film scores it was harder to get bigger or bolder than Bernard Herrmann. His work is often sighted as inspiration for most modern film composers and it is not hard to see why. He creates memorable themes, used creative instruments and even invented styles of scoring that have become modern movie music clichés. Sure that may not seem like praise, but the reason these become clichés is because they worked so damn well in the first place.

You want that classic 1950s sci-fi sound? Herrmann created it for The Day the Earth Stood Still. The nifty uses of the Theremin (that electronic instrument that sounds like synthetic ghost) gave the film a unique voice. It works so well in the film, building tension and adding that touch of mystery to keep the viewer off balance.  Of course it inspired countless sci-fi films from that point on, even Danny Elfman’s parody score Mars Attacks. But when you listen to the original score in context (and even as a stand alone) it really is a remarkable achievement.

Want another famous movie moment? Herrmann was Alfred Hitchcock’s composer of choice for many years. Their most famous collaboration also lead to one of the most famous movie music moments of all time. The stabbing “Herrmann strings” used so diabolically in Hitchock’s Psycho.

This technique has been parodied and borrowed so often it’s hard to remember when it was fresh. But the impact of the music with that scene was so powerful that it is still heard to this day. You’ll hear it in television commercials for toilet paper and even in shows like Hell’s Kitchen when Gordon Ramsey discovers something horrifying. Overused, sure. But I can’t blame Herrmann for that.

Herrmann also composed one of the most effective love themes for a Hitchcock film. Here we have Scene D’Amour from Vertigo. The music for this film adds to much to the visuals and the acting, leading up to the climax which is one of Hitchcock’s most memorable. This love theme is so effective that it was borrowed for the score to The Artist in 2011.


Herrmann also provided the score to one of the most acclaimed cinematic films of all time: Citizen Kane. While the score is relatively short, the moments where Orson Welles chose to include music are very effective. This score shows one of my favorite of Herrmann’s abilities, to write big and powerful scores, and yet never overpower the film. He always manages to compliment what you are seeing. He wasn’t adverse to using atmosphere and tone as well as strong melodies and themes. The suite below is a bit long, but provides a strong variety of the music from Citizen Kane as well as a taste of what Herrmann could do to create mood. Amazing for his first official film score assignment.


Herrmann’s career was long and varied. He did work for television, including episodes for The Twilight Zone, and Gunsmoke. His final film score was Taxi Driver in 1981. But what really brought him to my attention was his work on the adventure films of Ray Harryhausen. Herrmann provided scores for The7th Voyage of Sinbad, Jason and the Argonauts, Mysterious Island  and The 3 World of Gulliver.

Lots of folks will tell you that Jason and the Arognauts is the best of the group. It’s hard to argue when you’ve got this great opening credits music. Herrmann took the rhythmic drumming used to pace the rowing Argonauts in the film, and based the heroic Argonaut theme off of it.


However, I have to recommend The 7th Voyage of Sinbad as the best place to start with Herrmann. He keeps true to his style with big bold music, and one of the best opening titles for an adventure movie.


The score continues on with a love theme for the princess and Sinbad, mysterious music for the island of Colassa, a bombastic bit of music for a battle aboard the ship, a dance for the cobra woman and themes for just about every stop motion creature encountered in the film.  My favorite music is the powerful music for the Cyclopes. It lumbers and thunders around, using a real anvil as percussion. Give this score a spin and you’ll probably be hooked on Herrmann as well. Below is a sample of his music for the Cyclopes.


Next time we’ll go back to the present with one of my favorite contemporary composers. He’s got a knack for adapting classic film and television themes, but he also has a great style all his own. The folks at Pixar figured this out and hired him to compose music for some of their most well loved films. It was work on Up that got Michael Giacchino his first academy award, and I doubt it will be his last.
Posted by Roman J. Martel at 6:00 AM