Time to jump into some more of my favorite Star Wars characters. I covered a runner up and numbers ten through six back on this post. Now it time for another runner up and my top five. So without further ado, lets get started. 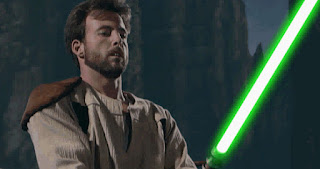 Man, I loved Dark Forces, the first First Person Shooter in the Star Wars universe. You played as Kyle Katarn the spy who stole the Death Star plans, and sent them to operation Skyhook (which appeared in the Star Wars radio drama – yeah I’m that big of a nerd that I know the radio drama). Katarn later faced down the dangerous Dark Troopers, guys with killer armor, killer weapons and jet packs. When Jedi Knight: Dark Forces II came out and Katarn learned Jedi abilities. Now you’re running around with a light saber and actually choosing if you are going to go dark side or light side with your force powers. Katarn was a memorable character and had some great adventures I played both those games quite a bit, and only later found out that Katarn continued to appear in the Jedi Knight games and of course appeared in comics and novels. The guy even had an official action figure made in his likeness. Not bad for a character who never appeared in any of the movies and is now considered outside the cannon.

5. Princess Leia - The original trilogy and The Force Awakens

It is hard to imagine a time when the princess to be rescued from the dark castle was not spunky, fearless and ready to kick butt. In most fantasy and space opera these days, it is a given that the Princess is not going to be a demure flower. When the demure flower does appear, most of us are disappointed. But Princess Leia changed all that. Before she even speaks a line of dialogue, she kills a Stormtrooper with her blaster. When she does speak, she sasses Darth Vader! Those early scenes in A New Hope establish Leia as a new type of princess, and a new type of heroine. Lots of folks give Ripley from Alien credit for being the first strong female protagonist, but I’d argue Princess Leia beat her to it by a couple years.

The Empire Strikes Back evolved her character further. She stays to the last minute on Hoth ensuring her soldiers are able to get away and coordinating the escape. Her banter with Han Solo is excellent, and their budding romance is classic stuff. The finale of Empire packs its emotional punch because of Leia’s torment at seeing Han frozen and taken away to an unknown fate. Return of the Jedi doesn’t utilize Leia as much as the previous two films (a messy screenplay is probably the main culprit), but she does get some further character development with her interplay with Luke on Endor. And yes, the metal bikini, I would be remiss if I didn’t mention that, right? What is interesting is that Leia character development is actually all based around her romance with Han and Luke. She is a tough resourceful leader in the original trilogy and that never changes. Even when we come to The Force Awakens she is still the woman we remember, but the added twist of dealing with her son and estranged husband gives Leia added depth. It creates added emotional resonance for the climax of the film. All told Princess Leia or General Leia Organa is an unforgettable character and key piece of the mythology of Star Wars.

4. Luke Skywalker - The original trilogy and the new trilogy

I’ll admit that for a long time I never really appreciated Luke Skywalker. I’m not sure if it was his whining about power converts in A New Hope or the fact that he ignores Yoda in Empire Strikes Back or that he has to have his daddy save him in Return of the Jedi that rubbed me the wrong way. I was just a Han Solo fan through and through. Then I realized it was because I admired Solo’s devil may care attitude but my personality is much closer to Luke’s.

Of course that is the intent, Luke Skywalker is a perfect example of the traditional mythic hero. His story arc in A New Hope follows all the key points, the call to adventure, resisting the call, the initiation of the adventure, the belly of the beast, the return and the triumph. Beyond that Luke grows through all three films of the original trilogy. The boy we meet in A New Hope is the not the same man we end Return of the Jedi with. While Han may be the more interesting character, Luke as admirable because he always tries to do the right thing. Even his greatest failing in Empire Strikes Back is driven by his desire to help his friends. And yeah he's a little cocky about defeating Vader, but we can't rise if we don't get smacked down once in a while. Return of the Jedi gives us Luke rising up to be a Jedi unlike any other before him. It’s a compelling journey and Luke’s adventure drives the majority of the original trilogy. I’m very curious to see where the new trilogy takes Luke, his enigmatic presence in the finale of The Force Awakens is intriguing.

3. Obi Wan Kenobi - The original trilogy and the prequel trilogy

One character who received some very interesting development over the prequel and original trilogy was Obi Wan Kenobi. In The Phantom Menace we meet a young Jedi in training. He admires his maverick mentor, but also falls in line with the thinking of the Jedi Council. This continues into Attack of the Clones where Obi Wan believes much like the council that they were on top of the Sith, not falling directly into the Palpatine’s plot. We also see the more aggressive and confident Jedi Master we always suspected. Revenge of the Sith has Obi Wan dealing with the fall of the Jedi order, the betrayal of his apprentice and the realization that they all played directly into the Sith’s hands. This arc leads us directly into A New Hope.

I’ve mentioned before how well realized Obi Wan’s arc is in the prequels, and how much Ewan McGreggor’s performance resonates. Alec Guiness creates an instant character in A New Hope, a wise mentor that leads Luke toward his destiny. But this also falls in line with the Obi Wan of the past, learning from his mistakes in some ways and yet still performing the same actions of trying to control a Skywalker instead of guiding him. I put Kenobi so high on the list because of the strong performance by both actors playing the role.

2. Han Solo - The original trilogy and The Force Awakens

There is a whole generation of Star Wars fans that just thought Han Solo was the coolest guy in the galaxy. I know Joss Whedon and J.J. Abrams fall into that group, and so do I. Harrison Ford just nailed the cocky attitude, banter with a walking carpet and the ability to hit on princesses look like too much fun. We totally understood Han’s mercenary streak in A New Hope, but we also cheered when he came back and saved Luke’s bacon. He was like the bad ass big brother to our protagonist and we loved him for it.

The Empire Strikes Back developed his relationship with Princess Leia as well as put him in the crosshairs for Darth Vader and Jabba the Hutt. His warm friendship with Lando builds up to the betrayal and the crushing defeat. Our favorite pilot has his wings clipped permanently . Or at least it seemed that way to me when I was a little kid. But Return of the Jedi brought Solo back for more. As a kid I was just pleased to have him back in the adventure and playing a critical role in the destruction of Death Star II. But these days, I can see Ford just going through the motions in that film. At least Han gets the girl, kicks some Imperial butt and his ship saves the day. The Force Awakens gives Solo added depth, and Ford bring the charisma with a vengeance. It was great to see Han Solo we know and love back in action, cracking wise and saving the galaxy. But his fate in the climax of the film also felt fitting and worthy of pushing the story forward for our new band of heroes. His legacy will have an important part to play in the new trilogy and that is great to see.

1. Darth Vader - The original trilogy and the prequel trilogy

To misquote Chasing Amy how can you not like the biggest, baddest, blackest dude in the galaxy? From his first appearance, a menacing shadow emerging from the smoke of destruction, to his funeral pyre in Return of the Jedi, Darth Vader became one of the most iconic characters in pop culture. His visual presence, his distinctive breathing, his red lightsaber and willingness to kill anyone who displeased him makes him one of the most feared and sinister characters in the Star Wars universe. The original trilogy places him as our main antagonist against Obi Wan Kenobi and then Luke Skywalker. And for most of the films he seems unbeatable. But in a genius twist of storytelling, Darth Vader is not defated by combat or Force abilities. His love for his son is what turns him from the dark side to the light, and it is Anakin Skywalker who brings balance to the force by destroying the Emperor, just as the prophesy declared.

In the prequels we follow Anakin Skywalker on his journey to become Darth Vader. As I mentioned in my examination of the 10 things the prequels did right, the story structure for this journey is solid, and actually well developed. Anakin turning to the dark side because of love mirrors his return to the light for the same reason. Yes poor casting and direction cause the prequels to fail in delivering the punch they could. But Revenge of the Sith gives us a glimmer of what could have been.  Even with his demise in Return of the Jedi, his shadow continues to loom large (and not just in the merchandizing. So much Darth Vader merchandise and imagry exploding everywhere for The Force Awakens even though the character never makes an appearance).  In The Force Awakens his legacy (or a warped version of it) compels Kylo Ren. I’m very curious to see what it is about Vader that drives Ren further into the Dark Side.

Well there you have it, my ten favorite characters from the Star Wars universe. It was fun to really ponder these folks and write a bit about them. Like many mythologies, Star Wars has a rich tapestry to look into, even sticking to just the films. This new trilogy of movies has me intrigued and enjoying the Star Wars universe more than I have in many years. I can’t wait to see what new characters may be added to this list in the coming years.

Who are your favorite Star Wars characters? Did I leave anyone off the list?

Click an ad before you go and the Force is sure to be with you.
Posted by Roman J. Martel at 6:00 AM