The Star Wars universe is one rich with stories and characters that have become entrenched in our culture. The mythic nature of the stories gives these characters a tremendous amount of resonance, and at the same time the way they evolved over the years has given them a life of their own. I have lots of favorites, but I tried to whittle this down to a list of ten and a couple of bonus favorites. I stuck mainly to the films but I have a few picks from novels, video games and few odd areas.

Lets start with one of the strange ones (that is why he is a runner up instead of a full-fledged top ten winner). Djas Puhr appears for about five seconds in the cantina scene in A New Hope but like nearly anything in the original trilogy has a full fledged history and adventures in the graphic novels and short stories out there. I first ran into him while playing the collectable card game (Or CCG for short). This guy was a bounty hunter with some deadly skills. He did some serious damage on his own, and could wield a lightsaber in a pinch. Djas was also a bounty hunter, and the CCG had some really cool cards that revolved around bounty hunting. Not a lot of cards that could hurt him outright (as opposed to Darth Vader or Boba Fett). I played dark side a lot, and Djas was almost always in my deck. It got so that my opponents would see him come out and sigh, because they knew he would do some damage before they were able to take him out. And he just looks like a bad ass as well. 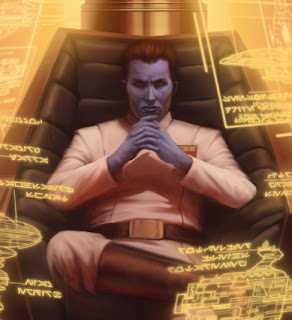 Perhaps my favorite non-film character has to be Grand Admiral Thrawn, the main antagonist in what is called the Thrawn Trilogy of novels by Timothy Zahn (Heir to the Empire, Dark Force Rising, and The Last Command). Cold, cunning and ruthless he presents a major obstacle for the New Republic. He is a master of strategy and using his opponents psychology, philosophy and instincts against them. He makes extensive plans with distant goals and manages to orchestrate serious blows against our heroes. Even when things don’t quite go his way, he doesn’t let it phase him, but shifts his schemes and often has contingences in place. He is as feared as Darth Vader, but is more respected, because he doesn’t let his anger get the better of him. His main failing is his arrogance. He is so confident in his intellect and understanding of his enemy, he underestimates them and it leads to his death. While I understand the poetic justice of his demise, I always found it a bit anticlimactic. But man, was he a force to be reckoned with. If you’ve never given those three novels a read, I recommend them to any Star Wars fan. They are fast paced, feel like a natural extention of the original trilogy and feature other great new characters including Mara Jade. But Thrawn is the main attraction for sure.

I see lots of love for R2-D2 out there, but his counterpart just doesn’t get enough credit. For the original trilogy C-3PO provides a lot of the humor in the series. He plays the straight man not just to his little robot buddy but to a lot of the other characters around him. In the original trilogy C-3PO was a necessary part of the story. Without him on Tatooine R2 would never have made it into the hands of Luke and then to his ultimate goal of Obi-Wan Kenobi. In Empire Strikes Back he is the comic relief as the story gets darker and darker. His interactions with Han, Chewie and Leia are pretty amusing. Of course he is instrumental in getting the Ewoks to help the rebels on Endor and thus saving the galaxy.

Sadly in the prequels he is around for little more than a few moments of fan service and interaction with R2. Well, except for Attack of the Clones. For some reason Lucas thought that having endless horrible puns coming out of C-3PO’s voice replicator would provide the height of comedy. This man also gave us Jar Jar Binks (who is not appearing on this list, sorry to say), so his grasp of humor is suspect. But lets get back to the good points. Anthony Daniels not only brings C-3PO to life physically (in that painful suit) but also vocally, and that combination is one that endures to this day. He and R2-D2 are the only characters to appear in all seven Star Wars films. It is hard to imagine the series with out them, but most especially with 3PO’s style of banter.

8. Boba Fett - The Original Trilogy and Attack of the Clones

Mysterious bounty hunter with kick ass armor and ship that looks like a deranged elephant. What is not to like? I could (and did) write a whole blog about why Boba Fett is one of the most enigmatic characters in Star Wars at least until the prequels came out. I think for a whole generation of Star Wars fans he was the equivlant of mysterious cool. And yeah, I fall into that generation. The years haven’t been too kind to Fett, but I will say that as far as looks and abilities go, he is still on this list. Ask me my top favorite Star Wars characters back in 1998 or so and yeah Boba Fett would be on the top of the list. But these days he’s fallen a bit, but still manages to hold his own.

Return of the Jedi brought this character to life for the first time. And what a jerk he turned out to be. Our first glimpse of the master of the galaxy in Empire Strikes Back hinted at a physically corrupted man shrouded in darkness. But we had no idea that this master manipulator was also good at taunting his enemies and fueling their hatred for him until they snap. We didn’t blame Luke when he just loses it and goes for the sneering cackling bastard. Supremely confident and delighting in his twisting and warping of lives, it is hard not to admire his devilish nature. The prequels actually do an interesting job of developing Senator Palpatine into the Emperor. He moves the chess pieces well and Ian McDiarmid gives an excellent performance going deliciously over the top in Revenge of the Sith. He is one of my favorite elements of the prequels. I’m curious to see if the new series hints at any sway from this dangerous villain, but if not, the six film saga we have serves as a fine showcase for this Sith lord.

One of the things that The Force Awakens does so well is deliver fun new characters and give them plenty of moments to shine. But no one was brighter than Daisy Ridley as Rey. We get our first female lead in a Star Wars film, and she embodies so much of what makes a great hero. He’s clever, compassionate and brave. Much like Luke Skywalker before her, she views her adventures with enthusiasm and excitement. She’s not the jaded modern hero who can’t be bothered to have fun or look in awe at what is around her. It is Rey’s interaction with her new comrades that drives so much of the story and the other characters in the movie. Ridley’s performance is perfect, and in the moments where she faces down Kylo Ren, faces the death of a friend and then meets a legend, we are right there with her, cheering her on and looking forward to whatever new adventure is around the corner. The prequels never offered us a character we could conntect to so closely. Rey is my favorite of the new characters featured in The Force Awakens and is the main reason I’m looking forward to the new trilogy to continue.