It is safe to say that my enjoyment of film scores started in the 1980s, when I picked up cassette tapes (remember those?) of the scores to Star Wars and The Empire Strikes Back. So it really shouldn’t be a surprise that a large part of my score collection contains music from this decade. I had a few readers ask me for top ten lists involving scores, and I was always at a lose on how to proceed. A top ten list of favorite scores vs. a top ten list of historically important scores vs top ten list of best scores by a composer… you see the problem.

For this one I just stuck with personal favorites of mine from films made in the 1980s. These are not my favorite films of the decade. But they are the top ten most listened to film scores. I did rank them, but this ranking is due to change at any moment, because – dammit they are all so good.

And yes, I love adventures scores, so you may notice a bias toward those types of albums. Fans of romantic comedies, sports films and dramas may be disappointed. 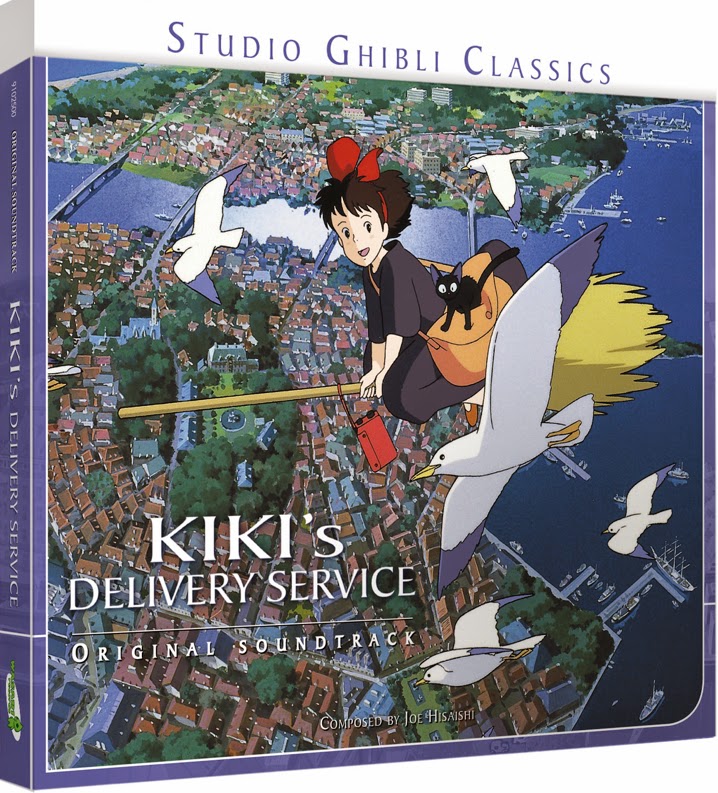 So I start off the one score that isn’t an adventure score. But this happens to be one of my favorite animated films by the Japanese master Hayao Miyazaki. Because of that, this score is one I can listen to at almost any time. It is light, bubbly and filled with a kind of European flair that you don’t hear in much of Hisaishi’s work. It has lots of fun little moments that are captured musically. It also features music symbolizing the joy of flying (a soaring waltz-like style that Hisaishi would use in the later film Howl’s Moving Castle), as well as moments of quiet contemplation. It’s just a well-rounded CD presentation, and perfect listening for a lazy Sunday or just to take you back to the world of the film. 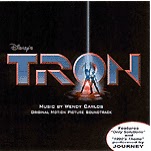 From sweet and soothing to harsh and electronic. The score to Tron fits the film like a glowing power glove, and is certainly not something that everyone will enjoy. Carlos took actual arcade style music fused it with dissonant orchestral techniques and created something very new and unique for the film. It has themes and motifs, and some of them are excellent. The early 80s digital synth effects just create a whole new audio world, one rooted in Atari and arcades. Whenever I mention this is one of my favorite scores of the decade, I get odd looks, but I stick by it. Nothing like Tron has been created since, and it is still a lot of fun to listen to. 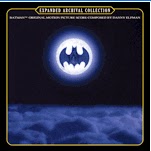 These days people think superhero music, and they think Hans Zimmer thanks to his work on the Dark Knight trilogy and Man of Steel. But before that, people thought of Danny Elfman. His score for Batman is one of the most iconic superheroes scores around, and one that influenced countless imitators. Gothic, powerful and a little quirky, the score captures the nature of the caped crusader and Tim Burton’s vision of that hero in every detail. Batman’s theme swoops, dives and enshrouds the listener. The action music can be frantic, but crates an elegant chaos that is always overwhelmed by Batman’s theme. I still think this work tops Zimmers in nearly every way (from a stand along listen), and every time I return to it, I’m surprised by how dynamic it is. 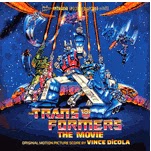 Oh man, am I gonna get grief for this one. But I can’t help it, I grew up with the Transformers, and this score is part of my childhood. It also the embodiment of the rockin’ 80s soundtracks. You know the stuff: full of synths and wailing electric guitars. Dicola takes those elements and actually creates a score with themes that battle each other, moments of dread and even a touching electronic piece for the death of Optimus Prime. His action set pieces are great stand-alone cues that could come off an electronic artists CD. But he even manages to work in ideas from the supporting songs on the soundtrack like Weird Al’s Dare to Be Stupid and Stan Bush’s Dare. It’s either genius or a marketing tool, but it is all awesome in a purely 80s sense. 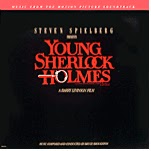 One of the huge influences on the decade in film music was John Williams. Bruce Broughton’s score for Young Sherlock Holmes takes the Williams template for adventure and fantasy scoring and simply nails it. Broughton keeps a lot of his own stylistic touch in the score, specifically the action queues which are very busy and frantic.  This score has everything you want in a top-notch adventure score. It’s got a great two-part theme for the heroes, a wonderful love theme, a sinister choral chant for the evil cult and a myriad of supporting themes. The action music is energetic, the horror moments are suspenseful and the end credits suite is one of my favorite from this decade. 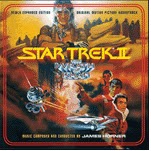 It was tough to pick just one score from Mr. Horner from the 1980s. He created so many wonderful albums in that decade. It ended up being between this score and his work on Krull. But I think as a complete listen, his score for Wrath of Khan is the best. He creates a wonderful nautical theme for the Enterprise and her crew. For a lot of folks, that theme is one of the best of the entire franchise. Horner also wrote a unique sound for Spock, one that inspired future composers Eidelman and Giacchino for their takes on Vulcan themes. Then there is Khan’s motif that brazenly explodes whenever the villain unleashes. Like all of Horner’s scores, it is filled with powerful emotions and big sound. The final tracks are some of the best of the entire franchise. 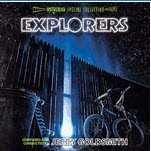 It was very difficult to pick a favorite Goldsmith score too. He created so many scores in all kinds of films, that picking just one was nearly impossible. But it all boiled down to the score that I listened to the most. That has to be his work on Dante’s family adventure film Explorers. There are about six different themes at work in this score, but the best is “the construction” theme, which serves as the heroic adventure theme for most of the score. I love how hints of the theme appear early in the work as the boys start thinking about the possibilities of space travel. Then you get a fully developed version as they build the machine, and then a wonderful exploration version of the theme (and the supporting “dreamer” theme) as they take it for a first flight. That is just one theme! The rest are all treated and manipulated in various ways, telling the story musically and with a lot of energy and warmth. It just makes me smile each time I listen to it, and it captures that feeling of adventure so well. A perfect fit for a score titled Explorers. 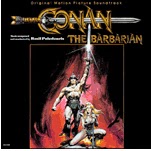 This wonderful juggernaut of a score is one that I can always listen to from font to back and never once consider skipping a track. It is that good. Poledouris combines medieval rhythms and melodies to create a primeval feel to the score. Most films took a more classical or romantic approach and this allows the Conan score to stand alone, and yet sound so perfect for it’s film. The wonderful use of choir in tracks like Riders of Doom adds amazing power to those scenes. The love theme is sweeping and adds another layer to the propulsive music. It is one of the rare scores, like Tron, that creates a sonic representation of the visual world of the film. You hear this score and you are taken back to the age of Conan.

2. Indiana Jones and the Temple of Doom composed by John Williams 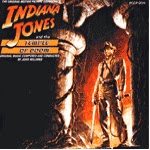 This one was nearly impossible, but I had to pick just one score from the Indiana Jones series, and in the end Temple of Doom won. I love Raiders of the Lost Ark, but when it comes down to it, Temple of Doom is just a hair more fun to listen to. Williams takes the style and themes he created in the first film and builds on them. But he adds whole new thematic colors to the score and they are doozies. A new gal in Indy’s life gets a new love theme. The sidekick gets a theme. But the supporting themes are too many to count. You get some slick action music erupting in key tracks like Slave Children’s’ Crusade and The Mine Car Chase (which had to have killed some of the orchestra with the speed of those notes). The Temple of Doom chant is the dark blood red cherry on top, adding a huge dose of horror to the whole thing. It is a blast from start to finish, with the Raiders March wrapping the whole thing up. Only one score could possibly top it.

1. Star Wars: The Empire Strikes Back composed by John Williams 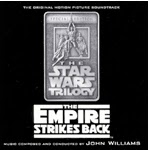 It was the 1980s and John Williams was king of the film score world. But this is certainly one of his masterpieces. His approach to the first Star Wars sequel is similar to his approach on the first Indiana Jones sequel: take the familiar themes and build on them. He ended up creating two amazing themes for this film: the Imperial March and Yoda’s Theme. Both of these themes are driving forces pushing the score into new story directions. The Imperial March is nearly omnipresent, opening and closing scenes, battering the rebels at each turn, and overwhelming Luke’s theme several times. Yoda’s theme works wonderfully during the scenes on Dagobah, often subtly guiding the film. Other times the theme steps forward and takes over: such as in the scene where Yoda raises the X-wing from the swamp. It is even turned into an amazing battle theme as Luke uses Yoda’s teachings to battle Vader. Han and Leia get a sweet love theme that is turned into a dirge when Han is frozen and then into a hopeful beacon as the film swoops into an amazing tour de force end credits suite. All that and again, Williams creates a myriad of lesser themes and motifs that drive the action, with one of his best chase pieces The Asteroid Field taking the cake. It is an amazing score, one of the few that actually tops its predecessor. If you had any doubt that John Williams was a Maestro of film scores, one listen to the complete version of The Empire Strikes Back should convince you to call him Master.

Here is a set of other scores that made into consideration. I could write more about each of them, but this post is long enough. Here they are in alphabetical order. Expect to hear more about them in future blogs.