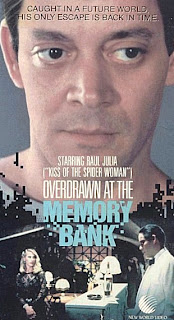 Summary:
In the not too distant future the giant company Novicorp dominates all of society. The huge Chairman (Donald Moore) controls all our lives, for profit. Most folks seem content with this, everyone except for Aram Fingal (Raul Julia). Fingal just wants to have some fun in his life. But even classic films like Casablanca are outlawed, and his days are spent in endless drudgery in a giant computer bank. Fingal eventually gets caught watching Casablanca at his workstation and this causes him to be flagged for a compulsory vacation.

This means that his consciousness will be placed into the body of baboon for some R&R. I’m not kidding. While this is happening a mishap causes Fingal’s body to be misplaced. The computech responsible for the safety of Fingal’s consciousness, Apollonia James (Linda Griffiths) does what she can to preserve his consciousness as the search for his body drags on. She ends up putting his consciousness into the Novicorp computer for safekeeping… and that is when Fingal starts to create his own reality. At first it’s all fun and games, including scenes inspired by his favorite classic films. But eventually Fingal figures that if he is in the main computer at Novicorp, why not make some changes. But the chairman isn’t going to take that lying down, and soon virtual Fingal is running for is virtual life, and Apollonia must decide if she wants to help the corporation or help the rebel.

Movie Review:
Based on a short story by John Varley, Overdrawn at the Memory Bank is like a prototype for The Matrix, but inspired by 1980s technology. It takes some of the concepts introduced in Tron but molds them into a science fiction dystopia environment. In fact it reminds me a bit of William Gibson’s Neuromancer, but without the dark edge, and delving a bit more into the corporate world of bureaucracy and control (shades of Tron again).  And much like Tron I’m not sure if this film would appeal to anyone outside of the computer industry when it was released in the 1985.

While, Overdrawn at the Memory Bank is ahead of it’s time, it also has the sense of fun that seemed to be a requisite of 1980s science fiction adventures. There’s a lot of humor built into the story, especially dealing with Fingal’s increasingly frustrated attempts to fight the system from the outside and then his joy at discovering the freedom of creating his own world within the computer. The use of Casablanca seems contradictory to the futuristic setting, but it creates a fun disconnect. Then you have the whole concept that people’s minds being put into the bodies of animals as some kind of therapy is just so goofy it makes sense.

It is the inherent goofiness that makes the whole movie entertaining. Unfortunately there are a few things working against it. The movie was made for public television, and therefore didn’t have a very large budget. But I think a considerable amount of the budget did make it onto the screen. There are a lot of blue screen and computer image effects. Sure this was done in the 1985, so it looks pretty crude to modern eyes, but I think it adds a charm to the movie. Now this movie was all shot on 1980s video, so it has a look that has been known to cause blindness in hard-core film fans. But it gets the job done and the interesting futuristic costumes and props show up well enough.

Probably the most interesting performance in Overdrawn at the Memory Bank is by Raul Julia as Fingal. He gets to have some fun playing the frustrated computer programmer, a virtual reality rebel, and the suave Casablanca version of himself, Rick Blaine. Unfortunately, I’m not sure if Julia quite understood all the technical aspects of the story. He seems a bit lost at times and it causes his performance to be wooden. Other times, he’s completely into the part and brings a lot of energy to the table

The rest of the cast is pretty average all the way around. Griffiths plays the nerdy heroine Apollonia well. We get that she’s clever and resourceful, but also not keen to lose her job. Unfortunately she gets saddled with some really bad voice over and some painful exposition lines. Lots of her dialogue is filled with really silly “futuristic” sounding words. For any actor these would be difficult to spout out, but when you have a whole set of “techno-dopple the positronic helio-graphic interlocking thing-a-majiggy” well you’ve got your work cut out for you.

Some of the other cast members play things broadly, but in many cases it works out fine. Many of these are virtual characters, so they don’t behave in a realistic way anyway. It kind of reminded me of eXistenZ in that way.

Even the fun 80s synth music adds that extra special addition of cheesiness to the whole affair. Where things break down is in the script explanations near the end of the film. A bunch of stuff happens, and I’m still not sure how everything resolves itself. But by this point Overdrawn at the Memory Bank is chugging along with lots of odd visuals, hilarious dialogue and Raul Julia spinning in front of a computer animated background that could be cribbed from an Atari game. And while you’d have a good time riffing along with this one yourself, let Mike and bots lend a hand with one of the funniest episodes of the eighth season of Mystery Science Theater 3000.

Episode Review:
When it came time to wrap up the first season of episodes for the Sci-fi Channel, the crew decided to knock out a trilogy of 1980s science fiction films. I’ve mentioned it before, but it bears repeating, that may be my favorite genre for the crew to tackle. To follow the uproarious Space Mutiny and the silly chronologically impaired Time Chasers we get this virtual reality gem Overdrawn at the Memory Bank.

This is another case where it seems the film was created just for the MST3K treatment. It is filled with images, dialogue, performances and plot elements that just lend themselves to riffing. And the boys unleash with a steady stream of commentary that make the whole thing hilarious.

One of the biggest gifts comes with our protagonists name, Fingle. The boys go to town working Fingle’s name into all kinds of amusing word play. During a scene that is filmed in soft light, soft filter and has Fingle and Apollonia close together Crow says “This is filmed in soap opera vision”, to which Mike adds, “It’s Days of our Fingle”. During a scene where Apollonia spouts out a bunch of techno jargon involving the “doppling process”. Mike adds, “I don’t want to bungle or bobble the Fingle dopple.” But my favorite take on his name is when Tom speaks for Apollonia with the modified slogan, “I’ve got a fever for a flavor of a Fingle.”

They crew also used Raul Julia to their best advantage. Not only do they riff on his mixed performance here, but they make sure to reference his roles in The Adams Family as well a hilarious Kiss of the Spider Woman reference. One of my favorite bits is during the opening credits, where Julia’s face is superimposed over a spinning cube. Crow declares it a “Raul-bics cube.” Tom says, “Hey I thought he was Puerto Rican, I didn’t know he was…” Mike shouts, “Oh no, don’t go there.” But Tom finishes with “Cuban!” and bursts out laughing.

But Overdrawn at the Memory Bank has plenty of other oddities that provide fodder. Since Fingle is so hung up on Casablanca we keep seeing parts of the film as well as a virtual bar and characters from the film. Crow finally declares, “You know, never show a good movie in the middle of your crappy movie!” There is also an odd thing about people being threatened with being doppled into the body of an anteater. It comes up several times and the boys have a field day with it. Throwing in mock-repulsed lines about “filthy disgusting anteaters”.

And if you wanted to brush up on your fat jokes, this is the episode to watch. The character called “The Fat Man” provides the boys with ample opportunities to mock his weight, his out of breath wheezing and the fact that he looks a little bit like TV’s Frank! I think they get a bit too mean with these, but it’s par the course with an episode from this era.

There is one thing I’m not too fond of with this episode. The boys go on and on about how bad the movie is. But I think it is actually a pretty creative film, with a lot of interesting and fun concepts. Yeah it gets confusing, and I’m with them when they have no clue what is happening at the end with “I am interfaced!” But they get a little too angry at the film, and I think they may have been a bit too riled up at it.

The host segments are actually quite a bit of fun. The episode starts with Crow selling shirts for his catchphrase, “You know you want me, baby!”. Mike points out that Crow has never said that, and that selling shirts is kind of stupid. Crow offers Mike a catalogue filled with catchphrases that Mike can order shirts for. Mike is rather fond of “We’re all out of toner”. The bots aren’t impressed. The rich irony, you can still get shirts with Crow and his catchphrase on them (as well as your favorite MST3K riffs over at Satellite News). Pearl is inspired by the fact that Overdrawn at the Memory Bank  was made for public television. So she creates her own pledge drive, with Ortega from The Incredibly Strange Creatures who Stopped Living and Became Mixed up Zombies manning the phones. One of her featured shows is “The Nature of Bobo” where Brain Guy does a killer National Geographic voiceover as Bobo does what Bobo normally does.  Tom is so impressed he calls the telethon so he can receive his free tote bag. His declaration, “There’s so many things to tote!” is frequently quoted around my house.

At the first break, the robots were inspired by the baboon in the movie to order their own monkey from instantmonkeysonline.com. The monkey arrives instantly, and immediately hates Mike. At the next break Mike is still being tormented by the monkey, even excessive drooling won’t save him (don’t ask). Meanwhile the pledge drive is in full swing as Pearl stops for a touching musical number called, “When Loving Lovers Love”, a duet with Brain Guy. The lyrics are hilarious and it is one of my favorite songs during a host segment. Gotta give Mary Jo props for belting this sucker out. At the next break, Tom decides to use doppling technology to go down to the Nanites virtual world. It goes very badly for him. The next break features Bobo trying to talk the monkey down, but then he joins in tormenting Mike. When the movie ends, Mike takes tranquelizes Bobo and the monkey, and Pearl is counting her massive amount of cash from her pledge drive.

Overdrawn at the Memory Bank was a great way to end the inagural season of the show on the Sci Fi Channel. It’s got plenty of laughs, a very watchable movie and some of the best riffing the show has to offer.

I give it five flavo-fibes out of five.

This episode is available on the Mystery Science Theater 3000 Collection Volume 4.
Posted by Roman J. Martel at 6:00 AM