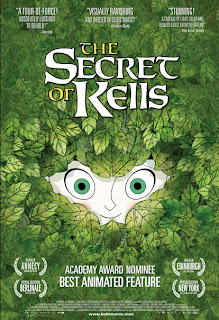 Introduction:
This is one of those movies that was on my radar for a while. It was nominated by the Academy Awards for best animated feature. The soundtrack by Bruno Coulais got a lot of buzz. Top it all of with the fact that it takes place in medieval times, has rampaging Vikings, irish monks and a magical book. How could that not be cool?

Summary:
Brendan (Evan McGuire) is a young monk living on the small Irish island of The Kells, during the dark ages. Abbott Cellach (Brendan Gleeson) is working on hard building an enormous wall around the Abby and local village. You see, Vikings have been terrorizing the coastlines, destroying everything in sight and searching for gold. The Abbots obsession with his wall leads to a demand that every monk work on building the wall and that no one leave the sanctuary under any circumstances.

Things change with the arrival of a monk named Aidan (Mick Lally), who is a master illuminator (an artist who would illustrate medieval manuscripts). Aidan wants to finish his masterpiece, a book that supposedly has mystical powers. The powers stem from the amazing artwork within. Brendan becomes fascinated with this book and Aidan. When he learns that a special berry is needed to complete the book, Brenden vows to help. But he must break the Abbots rule and sneak into the forest, which holds mysterious forest spirits. Will Brendan survive his adventure and maybe learn the mystery of The Secret of the Kells.


Overall:
Animation fans need to check this movie out. The visuals alone are a treat, with a distinctive style that feels like medieval manuscripts leaping off the page and onto the screen. The simple story is well told and the characters are engaging. I especially liked the wolf spirit Aisling (Christen Mooney) and the playful way she engages Brendan. A refreshing change from Hollywood and Japanese animation.

Here is a short clip from the film show casing some of the lovely animation and visual style.