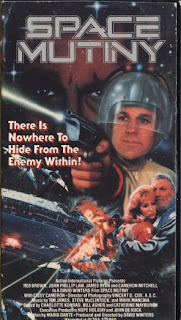 Hurtling through the cosmos is the spaceship, the Southern Sun. Captained by the bearded and wise Alex Jansen (Cameron Mitchell) the ship is looking for a habitable planet to colonize. But not everyone aboard the Southern Sun is willing to wait to find the perfect planet. They want off this tin can and they want it now! Lead by the scowling Commander Kalgan (John Phillip Law) they stage a mutiny and capture Jansen’s daughter Lea (Cisse Cameron).

But help is on the way in the form of big beefy Dave Ryder (Reb Brown). This fearless pilot to takes a shine to Lea and wants to help the Southern Sun in any way he can. This translates into punching people, shooting laser guns, driving a armored golf cart and screaming in a high pitched voice. Added to the mix are the half naked writhing Bellerians, who may help or hinder our hero in his quest to quell the Space Mutiny.

Movie Review:
Holy guacamole is this a huge slab of hilarious low budget 80s sci-fi cheese. If you love bad 80s movies, then you really need to see Space Mutiny. It is an amazing mish mash of corny dialogue, poor acting, ridiculous plot and borrowed footage from the 70s version of Battlestar Galactica the result is a movie that is pure comic gold. 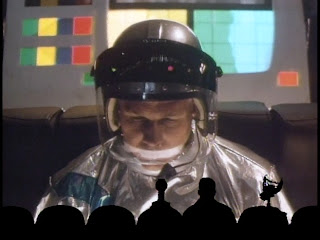 Lets start with the visuals. The special effects for nearly all the space scenes including the battle sequences comes directly from Battlestar Galactica. These effects were done by several of the folks who worked on the original Star Wars and didn’t join Industrial Light and Magic. As a result, this stuff looks pretty good, maybe a little out of date when Space Mutiny appeared in 1988 (by this time Star Trek: The Next Generation was already using computer graphics for the visual effects). But the detailed models used in those scenes clashes horribly with the low budget costumes, props, and sets used for all the interior shots of the film.

The bulk of the action scenes look like they were filmed in an industrial building somewhere, with all the railings, metal stairways and heavy machinery around. Oddly this same approach was used with greater realism in the update of Star Trek in 2009. But here, they just aren’t able to make the transition convincing. These folks are obviously running around a boiler room, not the high tech innards of a space ship. The scenes that don’t take place in the industrial settings look like typical spaceship interiors, not bad for the budget actually. 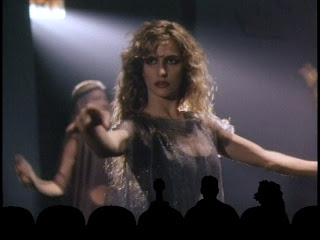 But the costumes, especially for the ladies are pretty horrible. Most of these aren’t flattering in the least, and have such garish colors (but so very 80s) that your eyes might burn out their sockets. Lea is the worst offender, but nearly everyone in the disco scene will is dressed, well, I’m at a loss for words. These are up there with the outfits used in Warrior of the Lost World. I also loved Ryder’s flight helmet, which I swear was something a neighbor of mine bought at Toys R Us, with its blinking LEDs and faceplate. You’ve also got some serious hair in this film. From Mohawks to mullets, nothing is left without hairspray.

Perhaps the silliest element of the interior scenes are the Enforcers, little golf carts covered with some kind of metal to make them look armored. The villains drive around in these and they look so comical that they lose all credibility. But the real cherry on the sundae occurs during the chase scenes with these little guys. It has to be seen to be believed.

You know on the face of it, the plot to Space Mutiny isn’t half bad. The struggles of the faithful crew against the mutineers could provide some tense moments, plenty of action and danger in the right hands. But we got two directors here, and rumor has it that neither of them liked the final result (and tried to get Alan Smithee credit). While action ends up being the main focus of the film in the second half, the poor dialogue ends up scuttling most of the tension (the acting choices don’t help either). Then you’ve got the Bellarians, half naked women writhing around who supposedly have some kind of supernatural power that comes into play at the end. But really it’s just an excuse to have half naked women writhing around. Sadly all their scenes are pointless and destroy the pacing by removing any tension present in the story. 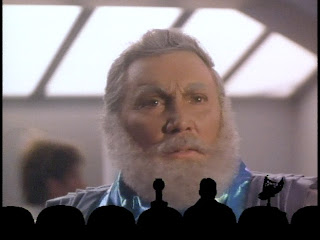 But the real joy here is the acting. You’ve got some folks going all out, and others who are there for the paycheck. In the later is Cameron Mitchell as Commander Jansen. Saddled with a ridiculous looking beard and a silly looking robe, you get the feeling that Mitchell was counting the days till the shoot was over. He’s not wooden, but he doesn’t seem to put in much effort, or really grasp what his role in the story is.

On the other end is John Phillip Law, a veteran of these types of movies (he’s a darn good Sinbad in The Golden Voyage of Sinbad). He plays the evil Kalgan as a completely arrogant, megalomaniacal madman. This comes complete with an evil laugh, deranged eye popping and straining with so much fury that you’re afraid his neck cords are going to pop right out. It’s wonderfully over the top and more than a match for the protagonists. 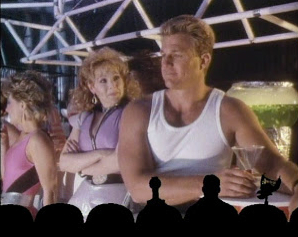 Yes Reb Brown has also done his share of cheesy action films, and Space Mutiny is no exception. As Dave Ryder he pretty much has to look buff, throw people around and shout a lot. He does all of these with gusto, Whenever Brown is moving around kicking ass, he looks at home. But in the dialogue scenes we start to see some limitations. He flubs lines, gets a bit incoherent and shows little chemistry with Cisse Cameron (who he ended up marrying after the film).

Cisse Cameron as Lea seems to be having a blast. She gets into the role, from playing the outraged daughter to blasting away at mutineers with abandon. Her unfortunate wardrobe and dialogue doesn’t stop her either. You can tell she decided to just go for it, no matter how stupid the whole thing was. Go Cisse.

The whole movie is a mess, a big wonderful mess. Even without Mike and bots around to riff it, Space Mutiny would be a bad movie lover’s heaven. But the bad movie gods decreed that MST3K would tackle the film, and it was good. 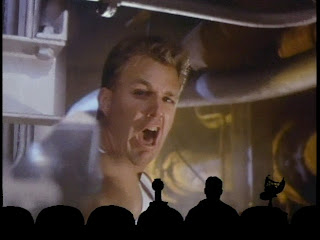 As the opening titles for Space Mutiny blaze across the screen looking like rejects from an old Atari game Tempest, the guys know they are in for a good one. They get on a roll with some of the names in the credits and the pace never slacks from there. The movie keeps gift-wrapping ludicrous moment upon ludicrous moment for them.

Perhaps the most memorable set of riffs comes when Dave Ryder first appears on screen. Mike and bots start coming up all kinds of outrageous names for the character including (but not exclusive to): Blast Hardcheese, Stump Chunkman, Slab Squatthrust and Big McLargehuge. Not only are the names creative but the timing of the delivery just makes each one funnier than the last. When the finale hits with Dave running around blasting away at villains and tossing them over railings, the nicknames come fast and furious. 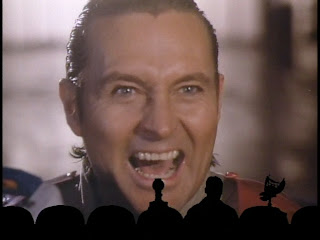 Kalgan’s ranting and raving followed by his evil laugh cause the boys to snicker enough. But they really go to town on his lackeys, one who is dressed in red armor and they dub lobster boy. When Kalgan tries to lead his army of badly coifed evil doers in a final battle, the laughs really kick in. Kalgan screams, and strains and laughs so much that Mike and bots are pretty sure that the actor has flipped his lid.

Lea is pretty much a walking punch line. Her hideous wardrobe, which makes her look more like a space-whore instead of the daughter of the noble commander is the first big problem. Tom dubs her a “sexy senior citizen” because she looks quite a bit older than our protagonist (unfortunate make up and hair don’t help). Her first scenes have her coming across as shrill and annoying, but once she falls for our big rubbery hero, she starts vamping it up. The amazingly garish disco scene has her dancing provocatively or as Crow points out “presenting like a baboon”.

It would be impossible to really cover all the great riffing going on in Space Mutiny. The overwhelming 80s atmosphere to the whole film causing all kinds of jokes related to the Regan years. A continuity issue featuring a character killed appearing in the background of later scene causes quite a bit of confusion for Mike and the bots. There’s even a running gag with one of the bridge bunnies wandering around “collecting signatures for Sherry’s birthday card”, that delivers a pretty hilarious payoff. Then there’s all the jokes provided by the Bellarians and their writhing. When you boil it down, Space Mutiny is one of the best-riffed flicks the boys did. 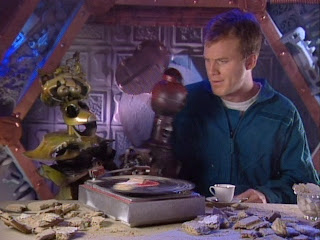 The host segments are part of the Roman Empire world storyline. But things kick off with the bots complaining about Mike's archaic encyclopedias, which contain factoids like “Someday man may walk on the moon” and “In the future we may learn to harness fire, instead of hide in our caves from it”. On the planet Pearl, Observer and Professor Bobo are imprisoned by the angry empress Flavia. Pearl hatches a plan to have Mike distract Flavia (played by Mike’s wife Bridget). During the first break Mike attempts to enjoy some quiet time when the bots have a full blown space battle – with the only remaining escape pods! At the next break Crow is convinced he is a Bellarian. Turns out he’s just a freak. At the next break, Tom is inspired by all the railing kills to put up a bunch of railings around the ship. My favorite is the whisper quiet spinning spiked railing. When the movie ends, Pearl has Mike attempt to distract Flavia with a fake seduction. Mike fails utterly, but it’s enough for Pearl, Observer and Bobo to make their escape – but not before Bobo starts the famous fire of Rome.

Space Mutiny kicks off the triple threat. Followed by Time Chasers and the hilariously riffed Overdrawn at the Memory Bank, you have three of the best episodes of the series back to back. It is easily one of my favorites. And one of my favorite Internet reviewers, Alison Pregler (Obscurus Lupa) declares it her favorite episode of the series. So take it from folks who know cheesy good fun, Space Mutiny is one to watch.

I give it 5 Blast Hardcheeses out of five.

Here’s a treat,:  the final chase scene un-riffed. It gives you a taste of the wonders in store.

This episode is available on the Mystery Science Theater 3000 Collection Volume 4.
Posted by Roman J. Martel at 7:00 PM