When Edgar Rice Burroughs created Tarzan back in 1912 I don't think he quite knew what he had unleashed. Not only did the character appear in countless books, radio adaptations, televisions series and video games, but there were also movies. Every decade or so, a new interpretation of Tarzan appears on the big screen. But the most famous have to be the 1930s classics featuring Johnny Weissmuller in the title role. Let’s take a look at the first, Tarzan the Ape Man.

Summary:
Jane Parker (Maureen O'Sullivan) arrives in Africa to look for her father James (C. Aubrey Smith). James is searching for the legendary graveyard of the elephants so he and his partner Harry (Neil Hamilton) can score some ivory and make it rich. Unfortunately the tribes in the area won't reveal the location of the graveyard for fear of a powerful force protecting it.

That doesn't stop our greedy explorers, so off they go with a group of native porters to drag their stuff around and act as lion bait. At first, things go as expected. They run into stock footage of hippos, get attacked by some puppety crocodiles and even run into a hostile tribe. Things take a turn for the shirtless when Tarzan (Johnny Weissmuller) shows up. He quickly takes a shine to Jane and abducts her. Not that she cares too much once she gets a good look at him. What follows is jungle romance, fatherly concern and shrieking chimps. Has Jane found her true love? Can Tarzan ever understand the ways of these bizarre pith helmet wearing fools?

Good Points:
Bad Points:
Overall:
This is a classic adventure film through and through. The pace is a little slower than one would expect, but other than that, there’s plenty of impressive stunt work, visual effects and animal action. This is worth checking out for fans of classic cinema.
Scores (out of 5)
Visuals: 4
Sound: 3
Acting: 3
Script: 3
Music: n/a
Direction: 3
Entertainment: 3
Total: 3 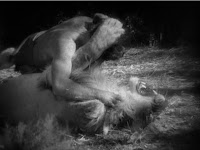 All the elements that would be borrowed or ripped off in lesser jungle adventure films can be found in Tarzan the Ape Man and done with skill. Sure the mix of stock footage rear projected behind the actors looks a bit dated to our eyes, but in 1932 this was exciting stuff to see on the big screen. Much of the footage was actually shot in Africa for another film Trader Horn, and you can tell the difference between the real savannah and the wilderness of Southern California. But that’s where the use of real animals comes in. This movie is filled to bursting with all kinds of wildlife, much of it real and used on location with the actors. A few moments of puppet or rigged animals are used, but they add to the fun of the film. You also get to see men dressed as apes hanging out with real chimps. So keep your 2001: A Space Odyssey remarks handy.

As far as full blown animal action is concerned you get a wide selection: lion attacks, elephant stampedes and leopards jumping all over the place. My wife got disturbed by the violence toward the animals (and wondering how many times the cast was using loaded weapons on them), but Tarzan the Ape Man was made at a different time, when things like that were not a concern.

This is also one of the noisiest movies I’ve seen in from the era. You get all kinds of animal sounds all the time. You expect to hear lions roaring and chimps chattering in a jungle movie. But the finale is nearly non-stop chaos of sound design, with elephants trumpeting and stomping all around. Natives screaming as they get squished. Cheetah the Chip shrieking and shrieking and shrieking. And you can’t forget the patented Tarzan call. Yes, you can tell Weissmuller isn’t really performing the call, but it adds to the fun. And from what I’ve read, he was able to duplicate the call pretty well as he continued to make the films. 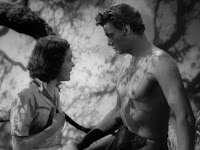 For those more interested in the human cast, I was actually surprised by how decent the acting was. I always assumed from the parodies of these films, that they were loaded with over the top performances or wooden delivery. But O’Sullivan and Weissmuller actually do a good job. Weissmuller doesn’t have a lot of dialogue, but his physical presence is more important anyway. But the swimmer isn’t wooden at all, his eyes do a lot of the acting, especially when he’s angry.

O’Sullivan is the real find. She is perfect as Jane: spunky, alluring and even if she does get put into peril, not a damsel in distress. Without O’Sullivan’s performance, Tarzan the Ape Man would be a lot weaker. Her character is the keystone to the story and she handles the role with skill. We are also talking about a movie made before the Hays code came into effect and toned down sexuality in movies. Tarzan and Jane spend most of the film in very little clothing and striking some provocative poses. Both actors are in great physical shape, so you don’t mind looking at them. But some of the scenes of raw sexuality surprised me. The sequence where Tarzan grapples with Jane in his hidey-hole surprised me with its aggression. I realized that this film was not for family viewing (something that did evolve in later movies), but targeted toward an adventure seeking audience.

Don't come to this film looking for a progressive portrayal of Africans. You get two types of black people in this movie: the clumsy superstitious porters or the bloodthirsty savages. The porters are there to get attacked by animals, fall off cliffs and get murdered by the angry tribes. The savages are there to chant, hurl spears and get their butts handed to them by Tarzan. Yeah it's pretty shameful to our eyes, but it was typical of movies from this era. 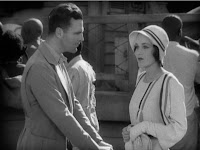 The themes of the greedy white explorers messing with jungle powers they can’t understand seems a bit progressive for 1932. Wile James and Harry aren’t villains per se, they are out of their element and end up paying for their greed. Jane immediately understands Tarzan’s world and because of this she remains unharmed. But her enchantment with the man, turns into a true love for the whole of the jungle and so she stays at the end of the film. A surprisingly strong decision for a woman to make for a film of this time. I knew that she would stay, but the script and O’Sullivan’s performance make it seem like an organic decision, instead of a plot point.

Director W.S. Van Dyke does a decent job with Tarzan the Ape Man. He has to work with stock footage, tricky visual effects, a gymnast, a swimmer who had done little acting as the leading man, and lots of animals to manage. MGM wasn’t expecting the film to turn into a hit, they just wanted something that people would enjoy and get some more use out of the footage from Trader Horn which didn’t do well. So Van Dyke wasn’t out there to make a masterpiece. Because the movie was showing off exotic locales and animals, it takes its time between action scenes slowing the pace down at times. 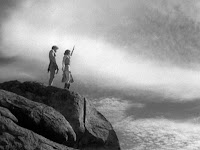 Did I enjoy it? From a historical perspective I did. Some of the adventure stuff was a lot of fun, but some the extended stock footage use got tiring. The movie could have been a bit leaner and it would have been a bit more gripping. It comes down to the charisma of O'Sullivan and Weissmuller, and how well you can tolerate all the jungle sounds in the film. Man, does that chimp ever stop shrieking? Luckily the next film in the franchise, Tarzan and His Mate was superior in every way - and may be the best of the series.

Read about the other lessons I learned from Tarzan the Ape Man at my review of the first collection of the films over at DVD Verdict.
Posted by Roman J. Martel at 7:14 AM