Tom Stall (Viggo Mortensen) lives in a small town in Indiana with his wife Edie (Maria Bello) and two children. It’s a nice quiet life, and you know that since this is a Cronenberg film that can’t last. As Tom is closing down his diner for the evening, a couple thugs come in and try to hold the place up. As things escalate Tom is forced to act, and boy does he. He takes out both men using only a coffee pot and a dropped gun. Tom becomes a local hero, but word spreads to Philadelphia. When Fogarty (Ed Harris) arrives in town he confronts Tom, saying that he knows who he really is. Tom appears to have never seen Fogarty in his life, but Edie begins to wonder if the man she knows as her husband is everything he appears to be.

Cronenberg has crafted an excellent film here with a great cast and crew. The story is simple, but the ideas behind it are intriguing and it offers a lot of food for thought and multiple viewings. Worth checking out if you’re looking for a well-made drama, with a history of violence.

Cronenberg is one of those directors I’ve heard a lot about but haven’t seen much of. I’ve seen his remake of “The Fly” but it’s been years. I’ve been interested in seeing “Videodrome” for years, but never got around to it. So when all the buzz about “A History of Violence” was going around, I decided to check it out. I really liked it. The story pulled me in and kept me guessing right up to where Tom leaves his home for Philadelphia. But at that point, Cronenberg’s shown his hand and you’re along for the ride.

This type of movie doesn’t work without strong acting and Viggo Mortensen really makes it work. He creates two separate characters and fuses them together into one man. Some of it is very subtle, but when the changes kick in you can see a huge difference between “Tom” and “Joey”. But on top of all that Viggo allows you to see that Tom and Joey are the same man, and it’s that extra layer that adds to the performance and makes the final scene of the film resonate.

Maria Bello also does a great job as a loving woman who is really tested. Is the man she knows as Tom really hiding a dark past? And if that’s the case, how can she reconcile this lie with their marriage. She’s attracted and repulsed by Tom, a scene executed with brutality on the staircase proves that. But her character goes a long way during the film and in many cases her reactions provide a greater impact on the viewer.

Cronenberg took the graphic novel and turned it into a solid drama. This movie isn’t attempting to capture the graphic novel feel; instead Cronenberg turned this into a type of Western. There are all kinds of angles, musical cues and story setups that are right out of a traditional Western. But these elements are all slightly warped by other elements more common to a thriller or taking visuals an extra step.

It takes skill to weave all these elements together and Cronenberg makes it look simple. His opening sequence, one long slow take following two men leaving a motel is just a simple example. It does so much, setting up these characters, creating tension, setting mood, and establishing the setting. When we get to see a little more in the next shot – it’s a shock. It’s skilled film making all the way around. 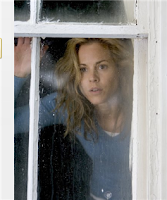 What I found a bit surprising is that my second viewing allowed me to appreciate the acting and direction even more. I thought the movie was solid when I first saw it a couple years ago, but the second viewing really opened my eyes. I also suggest you give the commentary track by Cronenberg a listen. He talks about all kinds of things from adapting the script all the way up to the reception the film got. It’s very interesting as he covers all elements of the production and talks about how they all work together to cement the story and the themes it contains.

“A History of Violence” is an easy recommendation for anyone looking for a dark drama (with some black humor thrown in for good measure). You really can’t go wrong with this movie.
Posted by Roman J. Martel at 7:35 AM