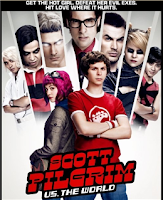 My fellow reviewers over at DVD Verdict picked this film as the DVD release of the year. I was one of the few the missed it, so I decided to rectify it. The only thing I really knew about it was that the title reminded me a lot of the old Nintendo game “Bart Simpson vs. The World”.

Scott Pilgrim (Michael Cera) may be dating a high school girl, but its all a front. He’s still recovering from a nasty break up. Well, he was until he meets Ramona Flowers (Mary Elizabeth Winstead). It’s love at first sight for Scott, but little does he know that seven evil Exs are going to make it very tough for him. They start popping up all over the place, challenging him to duels and creating all kinds of havoc. Does Scott have what it takes to defeat them and date Ramona, or is he going to be the subject of a fatality.

Another example of taking a premise from a comic book and just letting it go to town on the screen. Combining video game aesthetics with a romantic comedy story and injecting killer action scenes seems like a recipe for disaster. Director Edgar Wright makes it look easy. The end result is one fun movie.

This movie reminded me a lot of “Moulin Rouge” in that it is embracing the art of telling a story using film-making techniques. It’s not quite as hyperactive as Luhrman’s film, but it has that same spirit. And that is a spirit of fun. Scott Pilgrim is meant to entertain your eyes and ears, and it succeeds marvelously. I’ve got to give director Edgar Wright a hand, he makes it look easy.

When you boil it down to basics, this is a romantic comedy. It’s got boy meets girl, boy fights for girl and boy wins girl all over it. That simple story is what helps and hinders the film. In a way, you don’t have to worry too much about the plot because you know how it’s going to turn out. At the same time, Wright goes out of his way to build the characters and create added depth. It’s not a bad thing, but it does end up slowing the movie down in a few places. Most comedies of this type can only sustain about 90 minutes or so, and “Scott Pilgrim” is pushing two hours. Still, just when it feels like it’s flagging a bit much, something outrageous happens to pull you back in.

Taking elements from video games, comic books, television shows and slamming them all together into a geek pop-culture blender is what makes the movie so much fun. And here is where I wonder if viewers who didn’t grow up playing 8-bit Nintendo or reading Japanese comic books are going to enjoy this movie as much. Everything from the music and sound effects down to the posing and lighting is reminiscent of these pop-culture elements. The battles between Scott and the Ex’s are done with the over the top zeal of a game of “Street Fighter II” or “Mortal Kombat”. These battle scenes are the highlight of the film, each one is a color bombastic blast. The stylized elements appear all way through the film, but it’s the battle scenes that show them off.

The cast is completely committed to the concept and the story. Cera nails the part of Scott, a typical geek who has fallen hard for Ramona. His love triangle with her and the high school girl Knives (Ellen Wong) is well played. You can tell he likes Knives a lot, but it’s Ramona he wants to be with. Winstead makes Ramona alluring, smart, a little bitchy but still obtainable. It’s a tougher part than it first appears, but she’s a great fit. The rest of the cast is just as good, with Kieran Culkin, Anna Kendrick, Satya Bhabha, Chris Evans, Brie Larson and Jason Schwartsman having a ton of fun.

The music is a nice mix of pop songs and electronic music. Much of the electronic work includes samples from the video games being parodied in the film, and adds to the humor. Sound effects follow the same theme, mixing the real with the electronic.

The more I think about this movie, the more I appreciate what Wright has done. A had a similar reaction to Speed Racer by the Wachowski brothers. This movie managed to avoid some of the pitfalls of that film and is superior in many ways. But that energy and excitement to be doing something fun flows right off the screen and into the viewers. But I can also see that enthusiasm actually keeping some folks from enjoying the film. So I recommend it cautiously. If you’re of the age that remembers playing “Street Fighter II” in the arcade, someone who grows nostalgic when you hear the MIDI theme from “Legend of Zelda” and someone who enjoys a good comic book, check out “Scott Pilgrim vs. The World”. You’ll probably finish with a smile on your face.
Posted by Roman J. Martel at 10:25 AM